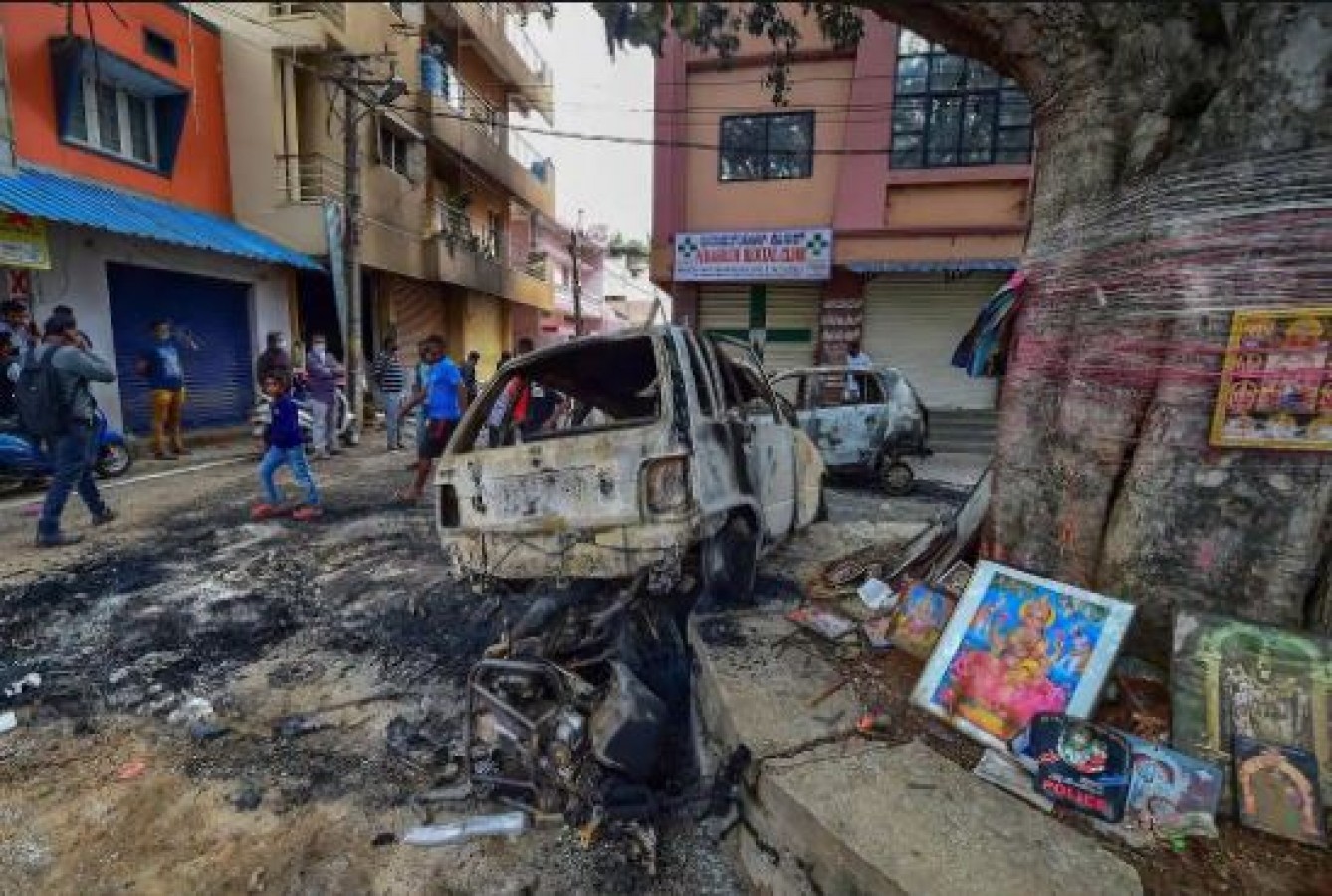 Communal riots in a country in which nearly a fourth of its population subscribe to a religion which subordinates the national interest to faith are inevitable. A good question to ask 74 years after Independence is not why communal riots happen (though some light has been thrown on this below) but how best can they be checked, controlled, confronted, and their perpetrators punished regardless of their communal color – punishment which puts the culprits to enough pain and penance to discourage them against future infractions of the law.

Governance repeatedly continues to disappoint us on this score. The flash riots on August 11-12 in a Bangalore locality with a sizeable Muslim population was only the most recent example of our pathetic failure to evolve a tough response. A quick-blooded and politically ambitious youngster, nephew of a local Congress legislator (a Dalit) posts an allegedly offensive Facebook post against the august prophet of the community; the message is circulated among the faithful; hundreds of hoodlums brandishing sticks and other weapons gather at the local police station demanding the youth’s arrest. Soaring tensions compel its inmates to open fire, killing three; the crowd goes on a rampage smashing scores of cars, including police vehicles, ransacking public property, and pelting stones at the police, nearly 50 of whom are injured. Another group tries torching the MLA’s residence, thankfully in his absence.

The vicious New Delhi commentariat referred to Muslim rioters as belonging to a “particular community”. The state home minister sounded distinctly defensive even though Karnataka is under BJP rule, and Hindu involvement was zero. He said the police was “compelled” to fire rather than hold out the prospect of shoot-at-sight orders the next time. Missing was the political will for decisive action. A magisterial inquiry was ordered by the chief minister, but no timeline set for the probe, much less the action taken. This has been the tragedy of most communal riots. Conviction, if any, takes years by which time everything is forgotten till the next upsurge somewhere else. The ease with which the conflagrations are executed begs the question: If even a strong nationalist government at the Center cannot control riots organized by Islamic bodies, who will? How long will the fear of the negative world opinion generated by a biased media sold to pseudo-secular western interests trump the urgent need to set our house in order?

Shaheen Bagh clearly sent out the wrong signal. The Center’s abysmal failure to smash the traffic obstructing dharna at a key arterial junction in the capital regardless of widespread public inconvenience encouraged the Muslim mafia to organize the Delhi riots this February. The obvious objective was to embarrass the government on the eve of Donald Trump’s visit. Every effort was made by the Left-Liberal media to pin the blame on Hindus by naming a leader whose utterances allegedly caused the violence. The probe confirmed what most knew: the mastermind was a local Muslim corporator belonging to the Aam Aadmi Party (AAP). Ditto the Bangalore riots. Only this time the malefactor owed allegiance to an Islamic outfit called the Social Democratic Party of India (SDPI), the political face of the radical Popular Front of India (PFI). Surnames are inconsequential, be it Khan, Mohammad, Hussain or Pasha.

Both the PFI and SDPI have been on the radar of the National Investigation Agency (NIA) for masterminding political killings, religious conversions, kidnappings, intimidation, and murder. Though active in six states, the bulk of their anti-national activities are confined to Kerala, Karnataka, and Tamil Nadu where Muslim numbers abound. Their terror links with the IS, Al Qaeda, Taliban, and LeT, are an open secret. And yet they continue to thrive right under the nose of the Modi regime. The anti-Citizenship Amendment Act (CAA) protests at Shaheen Bagh was PFI funded.

The front has since 2018 been under the scanner of the Enforcement Directorate (ED) for suspected violations of the Prevention of Money Laundering Act. Movement of filthy lucre from 73 PFI bank accounts into branches where the protests had spread was detected. Around Rs 120 crore were deposited into bank accounts in western Uttar Pradesh. The findings were ignored. The judiciary has been no less lax. Efforts to get the bodies banned have been stonewalled by courts in TN and Jharkhand. SDPI national general secretary Taslim Rahmani is a regular invitee to TV panel discussions, and unabashedly throws down the gauntlet, needling those in power to pick it up.

It is plain myopic of the government to think that it cannot afford to act till irrefutable evidence comes its way. Terror planners are not exactly blockheads to leave damning proof of their plotting. Circumstantial evidence should be enough to ground bodies like the PFI/SDFI. Courts ought to voluntarily avoid interfering on issues with a bearing on national security. Judges have no business deciding the seriousness of the danger posed by the subterranean activities of outfits working to break up the country.

Uttar Pradesh’s tough-as-nails chief minister, Yogi Adityanath, set a new template on how to deal with rioters in the wake of the anti-CAA protests. He descended on the brigands like a ton of bricks. Nearly 500 rioter owned properties were identified for seizure to compensate the state for the losses the vandals had caused the state during the arson and loot. More brutal was his reaction to demands for compensation to the families of victims who lost their lives during the violence. Hard luck, he said. His government had no policy to indemnify the kin of rioters killed in rioting. Muslims in Bulandshahr were forced to cough out upward of Rs 5 lakh after the riots in December 2018 over the butchery of a few cows.

Delhi CM Arvind Kejriwal ought to have done an encore in the capital. But this cannot be expected of a clever populist. In fact, it is doubtful how sincerely will Karnataka CM B S Yeddyurappa honor his resolve to follow in Yogi’s footsteps.

Lack of Hindu involvement in the Bangalore rioting deprived the secular media the chance to shy the first stone at the majority community. Otherwise blame for any communal carnage is almost always put squarely at the door of Hindus. The country has witnessed a series of riots since 1961. Dramatic events, says Leftist historian Gyanendra Pandey, were witnessed in Calcutta, Rourkela, and Jamshedpur following the theft of a relic hair of the Prophet in Kashmir (1964); large pogroms (a word liberally employed by Leftists) in Ahmedabad (1969); ghastly riots in Bhiwandi (1970) and Jamshedpur (1979); unbridled violence in Moradabad (1980) and Biharsharif (1981); huge massacres in Nellie (1983); and terrible riots in Bombay–Bhiwandi (1984).

Going by the opinions of Marxist historians the Muslim hand was wholly missing everywhere. The image of the daraa hua musalman can possibly be traced to such biased, one-sided accounts. The writings cast a long shadow on Hindu minds for decades when the ground reality is starkly different. Sanatan dharmis lack the temperament to start riots. Violence has never been in their DNA. Post-2014 Hindus have indeed been asserting themselves more emphatically for which they can hardly be blamed.

However, going by a speech delivered by former prime minister Atal Bihari Vajpayee in Parliament on 14 May 1970, Hindus have been refusing to be pushed around for much longer. The speech, culled from ABV’s oratorial collection, Four Decades in Parliament, was reproduced by Swapan Dasgupta in his book, Awakening Bharat Mata (2019). It deals with the situation created by the communal tension after the Bhiwandi riots.

“…who starts these riots…I have the report prepared by the Home Ministry…The National Integration Council has set up a sub-committee to consider the problem of communalism…the Government of India had prepared a report for it in which major riots in the country during the past year and a half had been recounted and their reasons discussed. As many as 23 riots took place during this period and according to the Home ministry’s report 22 of them were started by members of the minority community. The report has not been published, but it should be.

“These 23 riots include riots in Calcutta, Nagpur, Aurangabad, Cuttack as well some other parts of the country. I take it that the report of the Home Ministry is based upon reports received from the state governments. But the reports of the state government should be based upon facts, and the facts proclaim loudly enough that these riots were started by some of our Muslim friends…”

The most important part of the speech is where ABV mentions why riots happen:

”…one reason may be that our Muslim brethren have concluded there is no place for them in India, no guardian for them, so it is better to die fighting than to live.

“Another reason may be that some Muslims are connected to Pakistan, and indulge in rioting at its behest. Pakistan wants to tarnish our image. Hindus are being driven out of Pakistan. If atrocities are committed on Muslims in India, Pakistan would get the opportunity of making propaganda against India.

The speech also reiterates the point made earlier: that Hindus are incapable of starting riots: