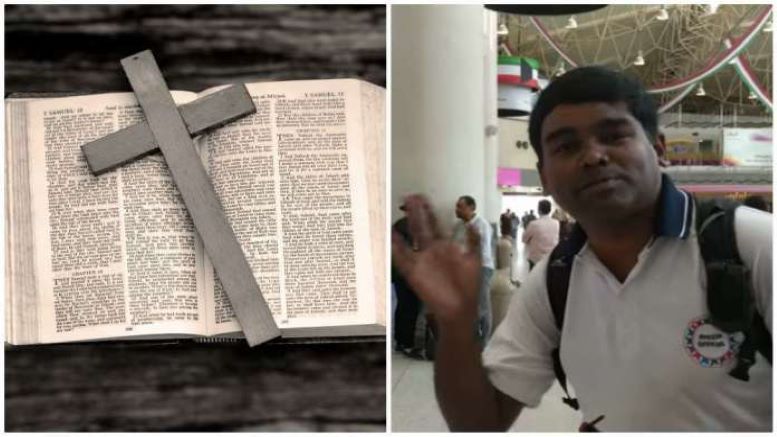 According to a report in The New Indian Express (TNIE), about 75 youngsters from at least around 12 different schools across TN have made allegations of sexually inappropriate messages to girls in the 12-17 age groups being sent by the two preachers.

These allegations were recently revealed by the victims on social media (SM). Despite the fact that the two have been sending inappropriate texts for a long time now, the entire episode came into the public domain after a youngster shared collated screenshots on Twitter.

Although the issue has now gone public, such is the fear among the girls that most of the victims have not come forward to file police complaints. One of the students told TNIE that she had been subject to moral policing while in school and it was the fear of backlash where she would be blamed that has forced her to not approach the police.

She had been harassed by her school teacher in Vellore for going out to eat ice-cream with her male friend. As expected, her former school teacher had even called and reprimanded her for “ruining the lives of innocent preachers by making the conversation public”. She even alleged that the teacher not just dissuaded her from going public but also praised Samuel and Reuben while blaming the girls for misinterpreting the conversations.

Another important reason for most of the students keeping mum is the charming ways of the preachers who sweet-talked young impressionable girls and pretended to offer support only to take advantage of their positions to exploit the girls.

Almost all of them obliged and gave in to the demands of Jaisundar and Clement without even realizing that they were being abused. As per the students, humor was used during SU sessions to promote homophobia, sexism, and shaming victims of the me-too movement. Jaisundar often forced students who were unsure about their sexuality to undergo “conversion therapy”.

Jaisundar has been with the SU from 2006 and often visited various schools in the state to conduct Vacation Bible School and Bible Studies summer camps accompanied by his team. Such was his charm that students would vie for his attention revealed one of his victims. According to her, Jaisundar began taking advantage of his “special status”.

It has come to light that Jaisundar would ask the girls to make video calls, meet him alone, and expressed his desire to “cuddle them”. His provocative messages made his mal-intent clear.

One victim tested the ground by sharing the texts with her friends before going public with her allegations. However, Jaisundar had created such a good image for himself over the years that no one believed her and on the other hand labelled her as an attention-seeking liar. This shook the confidence of the girl to such an extent that she felt guilty and stayed away from SM for several months.

Not just had Jaisundar and his accomplice crafted their public images with utmost care over the years but the school also never provided a suitable environment to the girls for expressing their fears freely and openly. On the other hand, it was the girls who were humiliated and shamed for ‘attempting to malign’ the preachers.

Many who have come out in the open are being bullied into silence by not just the school and Church authorities but also by their own families and the community as well. As one teenaged Vellore resident revealed that her parents blamed her for humiliating a respected person from their community and it was she who had invited harassment by doing something that provoked the preacher to send “such texts”.

One of the youngsters who had shared the screenshots of the chat on SM was forced by the church authorities to resign from his administrative post, an allegation the church has denied.

TNIE states that it is the Church of South India (CSI) which is the parent body of the church that purportedly forced the youth to resign. It also said that the senior representative of the CSI Synod Seva wing denied having knowledge of the incident.

Another class 12 student was silenced with the threat of being ostracised as her family and community members threatened to cut off all ties with her if she went public with her allegations while her teachers blamed her for “putting Christians at risk” through her posts.

The SU statement revealed that after receiving the complaints they have suspended Jaisundar and set-up an investigation committee to probe the allegations and three other people named on Twitter in this regard were also under the scanner.

However, Joel Giftson who brought the entire issue to the public platform through his Twitter posts has alleged that the SU is an extremely paedophilic organization that did not to act till such time that he went public.

Jaisundar on his part had defended himself saying that he sent the texts without any malicious intent and that his students had misread and misinterpreted his messages. Reports state that a police complaint has been registered against Jaisundar and Clement on Tuesday in Chennai.

SU which came into existence in 1867 is an evangelical organization that works with schools to conduct Bible classes for students. It comes under the CSI which supposedly has adopted a child protection policy recently.

The fact that the abuse was allowed to go on despite the CSI supposedly having strict guidelines to follow the JJ (Juvenile Justice) and POSCO (Protection of Children from Sexual Abuses) Acts shows that the organization has been lax in implementing the so-called guidelines.

Furthermore, all those in positions of authorities including parents, teachers, church authorities, and community members are bothered more about the institution’s “reputation” thereby forcing victims to keep mum and indirectly emboldening the abuser to carry on his abuse.