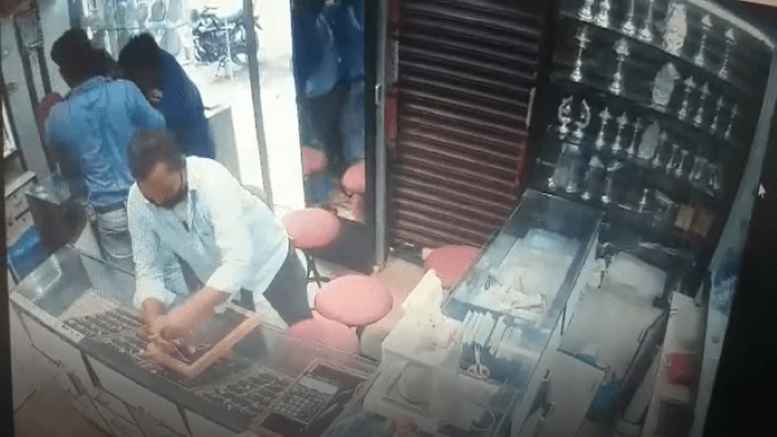 Sharpshooter and murderer Saifuddin returning to his home state West Bengal after looting a jewellery shop and murdering a businessman in Mysore, Karnataka, was arrested at the Kolkata airport and is being sent back to Karnataka for further investigations.  Known for producing one of the maximum number of IT professionals employed in Karnataka, West Bengal is now earning itself a name for increasing numbers of grooming jihadis and anti-social elements hailing from a particular community. Saifuddin is just another addition to the already extensive list.

As per reports, the police have confirmed the name of the accused to be Saifuddin Miyan who had arrived at Kolkata to reach his native in the Malda district of West Bengal. The police further affirm that Saifuddin was on the loose with the charges of several murders on him.

Reports also state that Saifuddin along with his other accomplices had travelled from Mumbai to Mysore by train. Their plan was to rob a jewellery store.

On Monday, 23rd August, all the four armed robbers arrived at the Amruth Gold and Silver Palace, a small jewellery store, at Vidyaranyapuram in Mysuru one by one. They had entered the store on the pretext of buying gold chains. While one of the store attendants showed them the jewellery, they brought down the shutters of the store and started their burglary.

On their way out with their booty, they opened fire in the store owner’s direction. They also shot a local named Chandrashekar who had come to purchase jewellery while decamping. It has not been confirmed as to what triggered the gang to open fire at the buyer or the owner. 23-year-old Chandrashekar was rushed to the hospital but eventually succumbed to injuries.

The case was registered at the Vidyaranyapuram police station and investigations commenced almost immediately.

A 45-second-long CCTV footage was also released by the police that showed the gang entering the store one after the other and finally bringing down the shutters. It also showed one of the robbers looting the gold ornaments, while the others can be seen attacking the owner. The police had confirmed it to be the first case in 10 years where guns were used to execute a crime in Mysore. The police also announced a reward of 5 lakh for anyone who provided any information about the criminals.

“The case has been taken up with utmost seriousness and different teams have been formed to ensure diligent investigation and early nabbing of culprits. In total 25 officers and 80 staff are fully dedicated to this work. However public information is always useful and the police department has announced a reward of 5 lakh rupees to anyone who gives useful information towards detecting the case and arresting the accused. Their details will be kept confidential,” said Mysuru Police Commissioner Chandragupta informing about the investigations on the incident.

However, the assassins had fled to Mumbai by then and Saifuddin had decided to go underground by heading towards Kolkata. Karnataka police were aware of his moves and had briefed the police of the Netaji Subhas Chandra Bose International Airport area accordingly. Investigative police officials had formed a trap around the airport to ambush Saifuddin in a timely manner and detained him from the airport area just as he exited the building. The accused was presented at the court by local police on Saturday, 28th August and handed over to the Karnataka Police’s transit remand from where he will be taken to Mysore. Further investigations are underway.