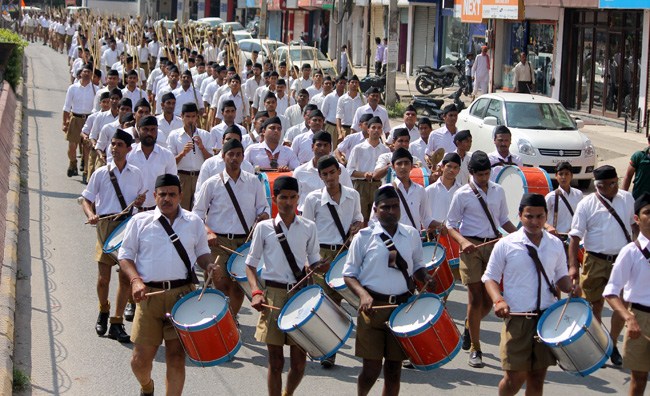 An RSS procession was attacked today morning while it was passing through Ghazinagar area of Raipur, Chattisgarh, Hindi daily Dainik Bhaskar has reported.

The RSS volunteers were taking out a path sanchalan (route march) at 8.30 AM, with permission from authorities. They reached Ghazinagar area, shouting patriotic slogans, and were about to pass in front of a mosque when they were stopped.

Some Muslim youth came out and stopped them from passing in front of the mosque, and claimed that since Section 144 was in force, they were not allowed to take out the procession. When RSS workers countered that they had all the necessary legal permissions, the dispute worsened.

A large Muslim mob soon gathered and RSS workers also called more people from their side. The situation went out of control – swords were out and heavy stone pelting went on for about 30 minutes. Bhupendra Sahu, Narayan and a few others were injured. Some vehicles were also damaged.

Police resorted to lathi charge to disperse the mob, and senior authorities like Collector, IG, SP rushed to the spot to bring the situation under control.

Will RSS Outreach to Muslims work?

“We say ours is a Hindu Rashtra. Hindu Rashtra does not mean it has no place for Muslims. The day it is said that Muslims are unwanted here, the concept of Hindutva will cease to exist. Hindutva believes that the world is a family”

But the fact remains that there are several Muslim-dominated pockets in the country where RSS is seen as the arch-enemy, despite the fact that RSS volunteers and programs are mostly focused on nation-building.

The project of building an inclusive, Indian version of Islam has a long way to go yet, as this latest attack on a routine RSS march, in a state which has just 2% of Muslims, shows. First and foremost, the vice-like grip of radical Muslim clerics on the community has to be loosened – there must be strict monitoring of mosque sermons and madrassa teachings to ensure that Muslim children are taught respect for all religions and pride in the ancient pre-Islamic Bharatiya civilization. The Owaisis, Badruddin Ajmals, Kejriwals, Mulayams, Hurriyat, Mamatas, Urdu press and other reactionary leadership which incites and inflames Muslim youth at the drop of a hat have to feel the full force of law, and not be molly-coddled as the Nehruvian state is wont to do.

If we can do this, then we will open up space for the silent, long-suffering Muslim masses who have till now been bombarded with a narrative that either creates a sense of victimhood or supremacy. As history has shown time and again, it only takes a tiny 5-10% of a community to become radicalized in order to completely overwhelm the peace-loving majority. And with a religion like Islam which can be easily interpreted to justify murder of those branded as apostates, the threat to the rational, tolerant Muslim voice is chillingly real.

Till then, each and every Hindu festival, every expression of Hindu pride, every invocation to a civilizational patriotism, will continue to be reviled and attacked by Muslims in this country.