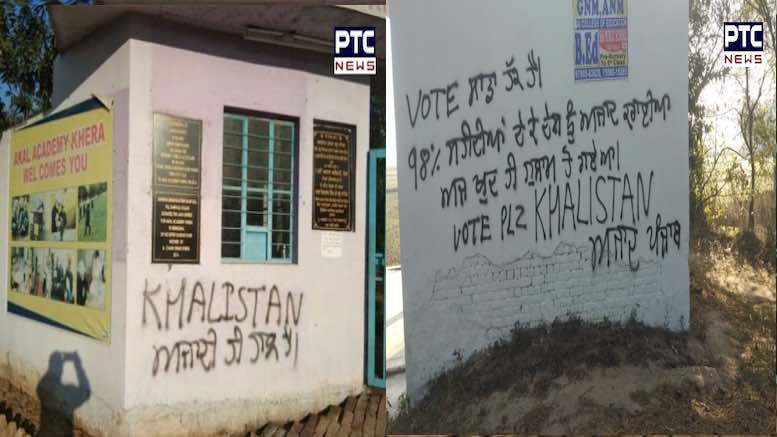 When villagers saw the slogans on Saturday morning, many of them gathered and informed Mahilpur police who came and erased the slogans. Some slogans were written on the walls of the watchman’s room outside the Akal Academy in Khera village. Police have registered a case against unknown persons.

As per local news sources, such separatist slogans have been appearing at night in different parts of Hoshiarpur for the last one month.

Last month, some anti-Hindu elements burnt an effigy of Sri Ram on Dussehra in Amritsar – a case was lodged against Angrez Singh, Agrez Singh, Jitendra Singh and 10 unknown people.

Many common Sikhs have expressed their strong views on social media against the Pakistan-sponsored Khalistan project:

It doesn’t take rocket science to decipher that this dangerous ideation of #Khalistan is implanted by Pakistan's #ISI after the defeat of 1971 Indo-Bangladesh war. Pakistan had taken aback by this utter loss and General Zia-ul-Haq championed a new doctrine of “bleeding India by

We don't need NRI gyan on Sikhi and our land, Punjab. The few NRIs have no right over Punjab whatsoever, if you really want Khalistan that badly you better carve it out of Vancouver or Manchester. We are well aware of how did Britishers used the ‘divide and rule’ policy to rule

The creation of a separatist Sikh identity, at odds with Hindus, can be traced back to the British colonial rulers, and even after Independence, influential sections of Anglo-Saxon nations like UK and Canda have been silently supporting the Khalistan project to keep a check on Bharat or due to a misplaced sense of minority empowerment in their countries.

‘Secular, progressive’ political parties in Bharat like AAP have also been found to be flirting with Khalistani elements in their naked pursuit of power. Elements within Lutyen’s left-liberal intelligentsia have also been observed extending tacit support to Khalistan and other #BreakBharat projects.

In recent years, there have been a spate of killing of Hindu leaders in Punjab by Khalistani terrorists. Investigators found that ISI-sponsored terror group Khalistan Liberation Force with links to Italy, Australia and UK was responsible for 8 murders/attempted murders in Punjab in 2016-17, including the gunning down of RSS leaders Brig (Retd) Jagdish Kumar Gagneja and Ravinder Gosain.

Opposition to a humanitarian law like CAA which offers respite to Hindu, Sikh and other minority refugees from neighbouring Islamic nations, by both ruling Congress and the main opposition party Akali Dal, is a further indicator of how hollow, secular posturing has further vitiated the atmosphere in Punjab and emboldened Pak-backed Khalistanis.