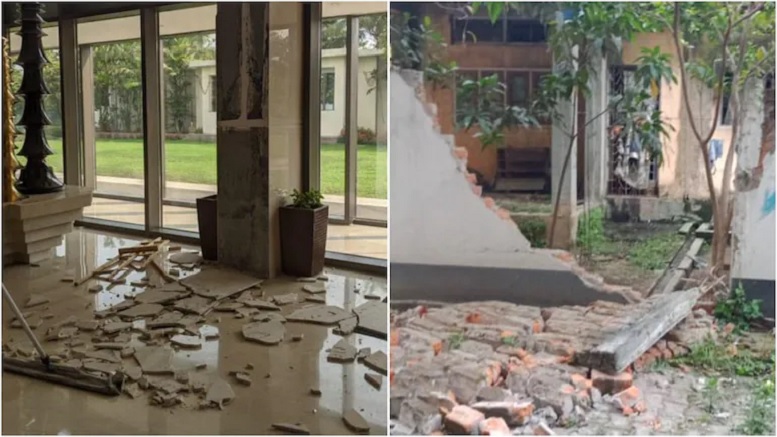 A powerful earthquake measuring 6.4 on the Richter scale jolted Assam, other northeastern states and adjoining North Bengal while nine aftershocks were recorded in the hours after the first quake which shook Sonitpur in northern Assam at 7.51 a.m. on Wednesday morning. According to the National Centre for Seismology (NCS), the tremors were also felt in North Bengal and other northeastern states including Arunachal Pradesh and neighbouring Bhutan.

According to the disaster management officials in Guwahati, there are reports of damage to buildings, roads and some other infrastructure in different parts of Sonitpur, Tezpur, Nagaon, Morigaon and adjoining areas but detailed reports are awaited.

The Chief Executive Officer of the Assam Disaster Management Authority G. D. Tripathi said that no human casualty has been reported yet but a few persons were injured. The official said that several apartments, buildings and hotels developed cracks. Electricity and gas supply have been disrupted in some places.

The NCS data said that after the first quake, nine aftershocks of magnitude 2.9 to 4.7 on the Richter Scale were recorded over the next 8 hours (until 3.55 p.m.) in the vicinity of Sonitpur, Nagaon and Morigaon districts. The earthquake struck at 7.51 a.m in the morning at a depth of 17 km from the surface.

After speaking over phone with Sonowal twice, Modi tweeted: “Spoke to Assam CM Shri Sarbananda Sonowal Ji regarding the earthquake in parts of the state. Assured all possible help from the Centre. I pray for the well-being of the people of Assam.”

Congress leader Rahul Gandhi said he stood in solidarity with the people of quake-hit Assam and asked party leaders and workers to be at the forefront of rescue and relief efforts.

Railway lines in northern and western Assam developed some problems due to the tremor even as the engineers and technical personnel of the Northeast Frontier Railways quickly restored the lines. The National Disaster Response Force (NDRF) personnel in Assam and Arunachal Pradesh have been alerted.

Tagging a video Assam Health and Finance Minister Himanta Biswa Sarma in a tweet said: “Water seeping out from a paddy field in Narayanpur area of Dhekiajuli, the epicentre of the massive 6.7 earthquake in Assam.”

Assam CM Sonowal immediately after the tremors rushed to Dhekiajuli, 140 km north of Guwahati, to assess the situation. Successive earthquakes in the mountainous northeastern states specially in Assam, Mizoram and Manipur have the authorities worried.

The northeastern states, specially Mizoram, frequently witness mild to moderate earthquakes that force the public and private builders to construct quake resistant houses. Seismologists consider the mountainous northeastern region as the sixth most earthquake-prone belt in the world. In 1950, an earthquake measuring 8.7 on the Richter scale had altered the course of the mighty Brahmaputra river, which passes by the congested Guwahati city.