Police Assaulted and Held Hostage by Villagers in Bijnore, UP 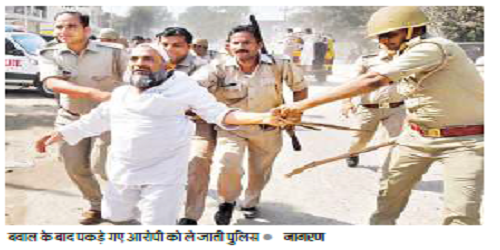 A confrontation between policemen and local residents turned violent after police objected to ongoing illegal mining of sand for land filling in the Rabbani Masjid of Peepla Jagir village, district Bijnore, UP. Stones were hurled at the police and two constables and an SI were taken hostage by the miscreants. Seven attackers have been arrested and a police case has been registered against 250 people including local resident Sharif Ahmed and his 3 sons Ajim, Salim and Farhan for obstruction in government work among other serious charges.

‌‌Illegal land filling was going on since several days in the Rabbani Masjid of Peepla Jagir Village. Reportedly, Nasim, Maheed, Sharif and other residents of Peepla Jagir village were illegally mining sand on bullock carts from the land of a farmer named Ajay Kumar without his permission. Police stopped the people ferrying sand on three bullock carts after Ajay’s complaint as sand mining is prohibited in the area. The men resisted the cops after being asked to accompany them to police station and engaged in a heated argument. ‌Soon a mob gathered and started to scuffle with the policemen and freed the men captured by police. After hearing from the constables, SI Abhitendra Kumar arrived at the scene with police force and took the accused into custody. The mob then turned voient and surrounded the police jeep. “The mob was in a belligerent mood. They made me run,” the SI said, adding that he fired five rounds in air sensing danger to his life.

The mob pelted stones on the policemen and took the SI hostage in a shop and locked him up. Two constables too were caught and made to sit there. Reportedly, some policemen were beaten up by the miscreants. The mob jammed the road with bullock carts.

‌‌After getting the information, SHO Satendra Kumar aarived at the scene with heavy police force and ordered a lathi-charge on the mob in order to disperse the crowd. Cops were rescued after opening the shutter of the shops. Heavy police has been deployed in the village. Later, SP Prabhakar Chaudhary too arrived at the spot and ordered strict action against the fanatics.

‌‌Circle officer Anshu Jain said, “We received a complaint that some people were digging sand from a field illegally. Two constables reached there and objected to it. But these people scuffled with the constables. When the SI rushed to spot, they misbehaved with him and locked him up in shop. Later, we had to send police force to rescue him. Police have detained some people in this connection and a case is being registered against them. The sand was being put on a road leading to the mosque.”

We thank @DivyaSoti for sharing the news, and Aditya Kushraj for the translation