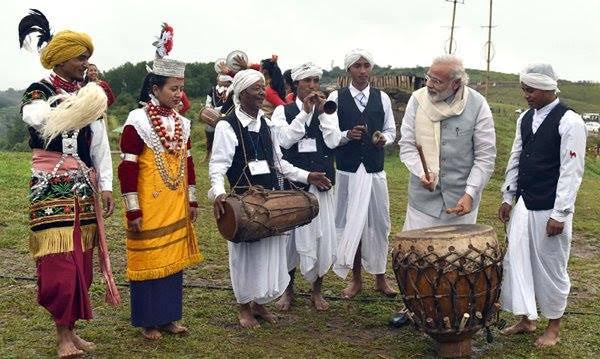 I don’t remember if any Prime Minister in the past ever imbibed the rich culture and traditions of Meghalaya more than the present PM, Narendra Modi. He relished them all to his heart’s content.

Well, PM’s visit to Shillong will have multiple effects across the Northeast. Our state will surely witness a major boost in the inflow of tourists. The state leaders should grab all the opportunities that fall on their laps. Yes, Meghalaya can now certainly pull in a good deal of benefits from the Centre. The only thing it requires is the right approach by the state’s leaders. PM Modi has clearly hinted that unlike the Congress, his Government will not discriminate against the state on the basis of which party is ruling the state.

It is much expected that the Congress High Command (HC), which is notoriously self-centered and far less efficient than the leaders in the state, would now stop filling poison into the brains of their juniors. The Congress HC, which has lost a sense of common prudence, should not dictate nasty terms from above that might deprive Meghalaya of central benefits. What has shocked us in the recent past is the fact that in spite of body-blow defeats of the Congress in a series of elections in different states, which is due to the sheer incompetence and immaturity of the Congress Vice President Rahul Gandhi, the party remains blissfully unrepentant with no hint of introspection.

What a huge contradiction that Rahul even took the side of a student group in Hyderabad whose activities clearly attract the serious charges of treason. He willfully incited the group against the present government and condemned the hanging of a terrorist Afzal Guru, which was actually carried out under his Congress government itself.  What is this sickness called where one who openly gets involved in anti-national activities still passionately wants to rule the nation?  Far worse is the fact that for all his obvious acts of immaturity the party members still adore Rahul and the media still glorify him as the  “youth-icon” of the country. Is an idiot lad usually chosen to hold the honor of being a youth-icon in Bharat? Everyone is bewildered.

Congress has better people, intelligent leaders, who can suitably replace the incompetent Gandhi family. Sensible leaders should not let the party fall from grace this way any further. Anyway, our pristine state must not suffer due to the aberrations of the Congress high command and its lack of vision and good-will. On the other hand, the impeccably dressed PM Modi is noticeably forthcoming and genuinely loving. Our astute Chief Minister of Meghalaya, Dr. Mukul Sangma, might have never enjoyed such close proximity with his High Command in Delhi that he did with PM Modi here in Shillong this time. It’s quite clear that the Prime Minister sincerely desires that Meghalaya should earnestly focus on tourism so that all other people of Bharat will appreciate the rich culture and scenic beauty of this Scotland of the East. PM has unmistakably cheered up the leaders by visiting Elephant Falls and sacred Mawphlang and taught them how to drum up for the tourists. He also showed the whole world that it takes a genuine heart with patience not only to appreciate but also to go deeper into each rhyme of any culture of this pluralist Bharat. Let’s sincerely hope that the PM’s disarming humility, friendly mingling with the villagers and cultural troops will surely put down the spirit of his rabble rousing critics. The state will surely thrive once our stoic CM will appreciate the right gestures of the PM.