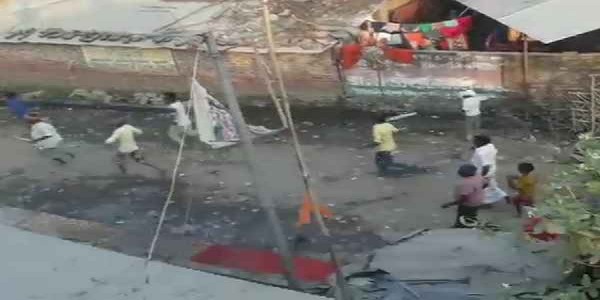 Durga Puja immersion event in Uttar Pradesh’s Bahraich became a target of Muslim extremists who raised the slogan of ‘Pakistan Zindabad’ after a heated communal spat, as reported in Hindi portal of One India,

On Saturday, 20th October, during the immersion of murtis, arguments heated up between the two communities in Khaira Bazaar area of Bahraich. There were reports of stone pelting and damage of other public properties in the area. Soon the Muslim extremists started raising the slogan of ‘Pakistan Zindabad’ in the market. This video went viral on social media as well wherein they can also be seen with lathis.

After the video of anti-Bharat slogans went viral in the district, the police administration became alert. As they received the information about the matter, Bahraich’s District Magistrate Shrivastava and SP Shaharaj Khaira reached the market. Both officials took stock of the situation. DM appealed the people to keep peace. The police and the PAC personnel were deployed on the spot.

The Police and Intelligence Department has started marking the sloganeering people in the video.

Additional Superintendent of Police Ravindra Singh has released his statement in a video-byte on Twitter:

In past also, Pakistani agents and terrorists have been arrested from the Indo-Nepal border district of Bahraich.

The same media report has mentioned that in Mathura district also, intelligence department has become active after balloons on which ‘I Love Pakistan’ was written, were found.