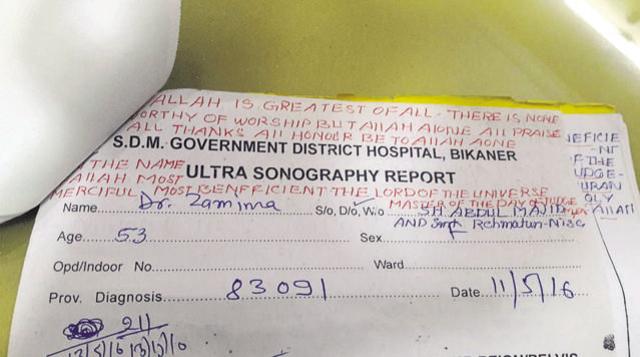 A senior Muslim lady doctor in Bikaner, Rajasthan has a unique prescription for her patients, irrespective of their symptom or disease – she advises everyone, even non-Muslims, to practise Islam and get cured! After receiving multiple complaints from patients, including a complaint on the Prime Minister’s Office (PMO) portal, the doctor Jameema Hayat has been issued a notice by the Chief medical and health officer (CMHO), Bikaner.

“In what can be called a bizarre blend of medical science and religious faith, a senior doctor at one Mukta Prasad dispensary in Bikaner advises her patients to practice Islam to cure themselves of diseases.

Chief medical and health officer (CMHO) Dr Devendra Choudhary has warned the doctor in question, Jameema Hayat, time and again after getting many complaints about her ‘religious’ approach while on duty. Now, the CMHO has issued a fresh notice to her.

Choudhary, who coincidentally is a batch mate of Hayat, told HT, “We have been receiving these complaints for a long time. We also warned her several times and issued notices to her but she refuses to listen to anybody.”

Sensing the gravity of the issue, even the Prime Minister’s Office (PMO), which came to know about it through a complaint on its portal, has ordered a probe into this matter.

“The PMO has ordered a probe into it and has instructed the department to take an appropriate action if any improprieties are found,” a departmental official told HT on the condition of anonymity. “We are conducting an inquiry in this matter and will conclude it very soon,” said Choudhary.

Recently, one Manish Singhal was stunned when Hayat advised him to practice Islam instead of getting medical treatment for his eight-year-old daughter who was suffering from heat stroke.

She explained to him how following Islam can save his family from all troubles. Singhal told HT, “After a formal checkup, Hayat started reciting Islamic quotations while his daughter was running a fever and was restless. I took my daughter to another doctor and got her treated.”

Due to many such instances of religious practices while on duty, Hayat has been transferred frequently. Earlier, she was posted at the district hospital in Bikaner. The department received a number of such complaints and she was transferred to a community health centre in district’s sub-division Sridungargarh. Here too, she has been put on awaiting posting order due to such kind of complaints. Her two elder brothers were famous medical practitioners.”

Both these Abrahamic religions – Islam and Christianity – state that only their respective adherents will be safe on ‘Judgement Day’ while the rest of mankind (pagans/kafirs) will burn in an eternal hell-fire. Often, their proselytizing mission to garner more converts is cloaked in humanitarian work such as education, health care, orphanages economic development, literacy etc. Followers of both religions also  believe that their respective holy books (Quran and Bible) are the repository of all wisdom and the final word of God.

It remains to be seen if the champions of secularism in Bharat will express their concern at a highly educated and trained professional like  Dr. Jameema Hayat blurring the lines between her work and personal beliefs. Rajasthan being a BJP ruled state, one can well imagine the outrage that would have occurred if a Hindu doctor was found advising patients to adopt Hindu Dharma to cure diseases. It is high time that the exclusivist doctrines of Abrahamic religions like Islam and Christianity are openly discussed in the public sphere so that the entire nation realizes that certain ‘minorities’ don’t quite buy the key tenet of modern secularism in Bharat i.e ‘Sarv Dharm Sambhav’ – popularly interpreted as ‘all religions are the same’.