Minor Girl Rescued as her Rapists & Kidnappers – Parvez, Shoaib – Try to Sell Her Off to Pimp 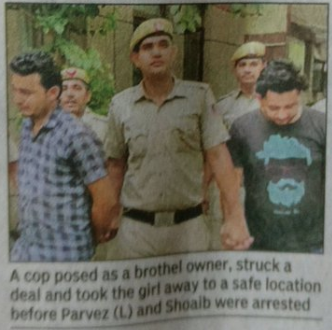 A 15-year-old girl was rescued from the clutches of her rapist and another kidnapper when they were trying to sell her to sex traffickers at GB Road on Tuesday, Times of India has reported –

“A team from the Kamla Market police station spotted the girl when the accused were waiting for a pimp and laid a trap. A cop posed as a brothel owner, struck a deal and took the girl away to a safe location before the duo were arrested. DCP (central) Mandeep Singh Randhawa has confirmed the arrest.

While being counselled, the girl, from Uttar Pradesh, told the police that she met one of the accused, Parvez, in a train while coming to Delhi with a cousin on Monday.

After befriending her, Parvez, who used to drive his Ertiga car for a cab company at Connaught Place, offered to get her a job, cops said. He asked the cousin to leave, saying he would take care of the girl.

Once in Delhi, he took the girl to Loni on the pretext of introducing her to somebody who would give her a job. However, after reaching Loni, he forced the girl to move to the rear seat of his car and raped her. He then called his friend, Shoaib, to accompany him to GB Road.

On the way, they informed the pimp about the girl and agreed to meet him near Kamla Market. However, they were spotted by the police team on patrol and the station house officer of Kamla Nagar was alerted.

Parvez told the cops that while he was driving the cab for a private bank, Shoaib was preparing to appear for a UPSC exam. Cops are probing whether Shoaib, too, had raped the girl.

A case of immoral trafficking and rape has been registered based on the statement by the survivor. While the police are trying to contact her family members in Uttar Pradesh to hand her over, the cousin with whom she was travelling is also under scanner.”

In a somewhat similar incident from Assam, a daily wage laborer Ainul Hoque pretending to be a Hindu tricked a married Hindu woman into eloping with him and then tried to sell her off to human traffickers.

In Feb this year, a minor girl who had been kidnapped from West Bengal by a Muslim man, Minajur Mondal, was rescued by Goa police.