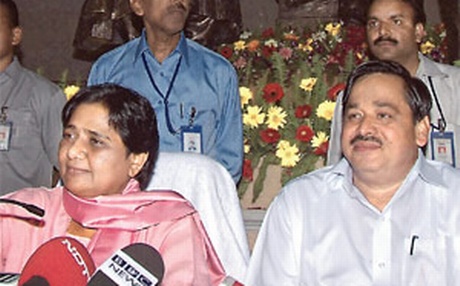 BSP supremo Mayawati has repeatedly flouted the Supreme Court ruling against seeking votes in the name of religion, by warning & beseeching Muslims to vote for her party in the ongoing UP elections.

The naked appeals to base, fundamentalist instincts of the Muslim masses & grievance-mongering, has been termed as Mayawati ‘wooing‘ UP Muslims by national media. Mayawati’s communal polarization of her Muslim votebank takes the time tested route of demonizing ‘Hindu’ BJP.

As reported by far-left journalist Shivam Vij, Mayawati rallies include talk about BJP’s ‘sins’ against Muslims – “trying to take away the minority status of Aligarh Muslim University, ending triple talaq, cow vigilantism, violence in the name of love jihad, false terrorism charges and so on. Every possible keyword she could use against the BJP, she did, describing it in the end with the Hindi saying, Munh mein Ram, bagal mein churi.” (Hindus keep chanting the name of Ram, while hiding a knife by their side)

Even if we ignore the issues declared taboo & unworthy of even being discussed as per ‘secular norms’ –  love jihad, cow smuggling and Islamic terrorism – it is revealing to note that none of our liberal commentators has thought it fit to challenge Mayawati for her anti-feminist stance of supporting triple talaq, or the blatantly anti-Hindu, racist saying “Munh mein Ram, bagal mein churi.”  That is a line which is often heard in Pakistan to revile Hindus as backstabbing, hypocritical people who are inferior to the pious, large-hearted Muslims.

Mayawati has also been repeating the propaganda that BJP will eliminate reservations and facilities given to minorities if it comes to power, in order to instil fear in Dalits, OBCs and the minority community.

BSP rallies this time around start with recitation of Quran verses and Hadees (collection of sayings and deeds of Muhammad) is quoted to exhort Muslims to rally behind Naseemuddin Siddiqui, the Muslim leader touted as ‘Qaid’ & equal of party supremo Mayawati. Bahujan Quami Ekta Mushayras—programmes held across the state featuring recitals of Urdu verses – are spearheaded by Naseemuddin Siddiqui’s son, Afzal.

BSP has has also enlisted the support of over half a dozen influential maulanas from top Muslim seminaries, including Imran Hasan Siddiqui, the president of the Al Imam Welfare Association, Maulana Faryad Hussain, the president of the Bareilly-based Sunni Ulama Council, and Maulana Salman Nadwi, the dean of information and preaching at the Lucknow-based Dar-ul-Uloom Nadwatul Ulama. Induction of notorious gangster Mukhtar Ansari in BSP is another indicator of Mayawati’s desperation for the Muslim vote.

But none of this is called out communal polarization & dog-whistle politics by our left-liberals.

Breathtakingly, PM Modi has been widely condemned by the same mainstream media and left-liberal political pundits for his factual comments about the discriminatory nature of Akhilesh Yadav’s regime  –

Fact – Since 2012, the UP government has allocated Rs 1300 crores for Kabristans. As compared to that, they spent 627 crores on revamping the Smashans. On a per capita basis, this works out to Rs 339 for every Muslim compared to Rs 39 for a Hindu for their respective places of last rites.

Fact – In 2016, a committee set up by Rural Electrification Corporation Limited (RECL) had found that there had been discrimination on religious grounds, in favour of the Muslim community, while implementing  the rural power supply scheme in UP’s Moradabad region.

Mayawati is not alone in playing this dangerous game of communal polarization of Muslims at expense of national integration & collective justice. Recently, Samajwadi patriarch Mulayam admitted that in 1992 he ordered the killings of Hindus solely for the purpose of allaying the fears of Muslims.

This is the stark reality of the distorted brand of secularism that has been enforced in Bharat ever since Nehru took reign as the first PM after independence. By feeding the monster of Islamist politics, we are only preparing the ground for an eventual second partition of the country.