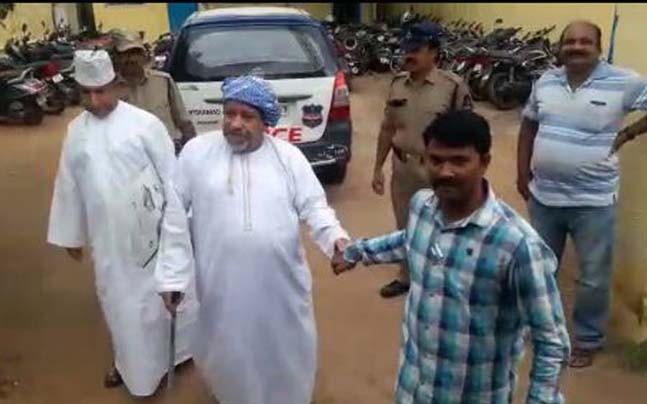 This prostitution & women trafficking racket, conducted through illegal contract marriages (also known as Nikah mut’ah or nikah misyar), in Hyderabad where affluent men from the middle east were targeting young girls has been known for a long time, but this is the first time some decisive action has been taken against the criminal Arab sheikhs. Hyderabad has long been considered a transit point for such human trafficking.

These Arabs paid plenty of money through touts and bought these young girls, ‘married’ and sexually abused them and then gave them talaq. Girls as young as 10 were sold for a meagre Rs 5000. What’s horrifying is that the Talaq nama and the nikah nama were read on the same day.

“The Arabs who come here conduct interviews of the women. One girl who was interviewed recently informed the police and expressed her dislike for marrying an old man. But the broker and her family kept pressurizing her,” said M. Mahender Reddy, City Police Commissioner. Police said the arrests were made when the sheikhs aged between 50 and 60 were about to marry girls aged between 15 and 17 years at some lodges in the old city of Hyderabad. The police commissioner said the police rescued 12 girls.

During the raid on a lodge, Oman national Ali Issa was caught while he was about to marry a 15-year-old girl with the assistance of his friends Humeid Ali and Shinoon Sulaiman. Omani agents Khalifa Hamed and Mazaaul Mohammed were also taken into custody.

Two Qatari Sheikhs along with one agent were caught red handed when they were about to perform child marriage at a guest house. Owners of four lodges were arrested for providing accommodation to sheikhs and abetting illegal activities.

The police identified 15 brokers from Gulf countries who were involved in fixing matches of young local girls with Sheiks. The racket was busted during the investigation into a case registered last month in Falaknuma area of the old city. Saeedunnisa had complained to the police that her husband with the help of some brokers ‘sold’ their 16-year-old daughter to a 70-year-old Omani national Ahmed Abdullah Amur Al Rahbi for Rs 5 lakh.

The police chief said efforts were on to rescue the girl and arrest the accused and bring them to Hyderabad. The arrested local brokers include Ahmed, Saeedunnisa’s brother Sikandar Khan and the latter’s wife Ghousia Begum, who played a key role in performing the marriage.

Chief Qazi of Mumbai Farid Ahmed Khan has been identified as kingpin of the racket. Police said the qazi prepared forged nikahnama as if the marriage was performed at Mumbai. Farid Ahmed Khan had also facilitated the marriage of a minor girl from Falaknuma earlier this year. Diplomatic efforts are on to bring back the minor girl and Ahmed Abdullah Amur Al Rahbi, the 80-year-old Omani national who married her.

Assistant qazi of Mumbai Munawwar Ali, who helped the Chief Qazi and qazi Habeeb Ali of Hyderabad, who performed the marriage of the minor girl, were also arrested. Police were on the lookout for one more qazi of Hyderabad, Ali Abdullah Rafia.

The police identified 15 brokers from Oman and Qatar, who were helping sheikhs in trapping poor parents by offering them money. “After reaching the new country the women end up getting exploited at the hands of several others,” police chief said while citing the statements of a few victims.

The police have also identified 35 local brokers including 25 women, who help sheikhs select the girls and perform the marriages with the connivance of qazis. Police opened suspect sheets against 38 local brokers, four lodge owners and Qazis who are resorting to illegal activities.

But even as the police is cracking down on human trafficking of girls & women in the Old City area of Hyderabad and conducting raids at several places, politicians have appeared at the Falaknuma police complex, the epicentre of police action, and some have rang up police officials to ask them to go ‘carefully’ with the investigation.

At least two GHMC corporators rushed to the Falaknuma police complex to secure the release of the Qatari nationals who have been arrested. One corporator went so far as to say he would not leave until the arrested person was released. “We had to request him to allow us to do our work,” said a police officer.

Another corporator came to the police station in the middle of the night to get the release of a qazi wanted in connection with a marriage case registered with the Chandrayangutta police. When the police asked if he knew on what charges the qazi was picked up, he feigned ignorance.

In last two days, the Falaknuma police complex has been frequented by small leaders of various political parties. “Huge money is involved. The brokers, who lured the foreigners, were ready to shell out lakhs of rupees. Right from leading advocates to leaders, they sought help from almost all the people,” said a police officer.

The politicians said that the Old City would get a bad name if such issues were highlighted. Some even said that the image of the government would be affected. Social activist say cases relating to trafficking in women and drugs should be assigned to special agencies like the crime investigation department.

Will the usually loquacious Hyderabad MP Asaduddin Owaisi, who has an opinion on everything from Kashmir to Assam to Gujarat, speak up on what is going on in his own backkyard?