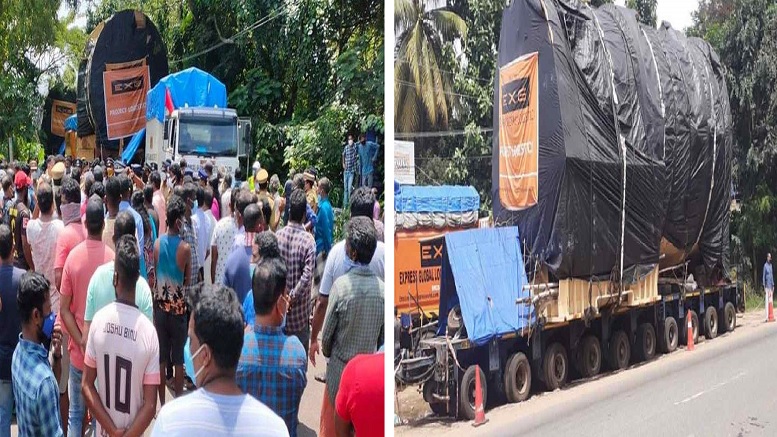 Extortion bids by organized labour unions continue unabated in Kerala. On Sunday, they held up components of the Indian Space Research Organisation’s (ISRO) next Trisonic Wind Tunnel project, in South Tumba of Thiruvananthapuram.

The vehicle was blocked by a group demanding a Nokku Kooli “gawking charge” i.e “wages for (just) looking on” of ₹10 lakh from the space agency in return for permission to pass. ‘Nokku Kooli’ is a system unique to Kerala, where licensed members of the head load workers union extort exorbitant wages without doing any work. They demand money for any work done in their area, irrespective of who does the work and whether it is complete or not!

This happened on a Sunday when the government had imposed total lockdown restrictions. News spread and more locals and those from politically affiliated labour unions gathered in huge numbers around the vehicle, resulting in chaos. This is happening at a time when the ‘model’ state is contributing two-thirds of the country’s daily new Covid-19 cases, and has a test positivity ratio of 17.5% (national average is 2.5%).

The wind tunnel had come from Maharashtra by sea and was being transported via road from Kollam to Thiruvananthapuram. It was stopped when allegedly passing through a Christian-dominated area and there is speculation that the labour union behind this mischief has Church links.

Media reports that the Kerala government’s intervention led to a ‘resolution’ is just another media stunt. In fact, ISRO officials intimated the CM’s office and labor minister V Sivankutty intervened, but the mafia resisted for four hours. The ISRO officials stood their ground and it was defused following several rounds of talks and protests. It meant that the persistence of an ISRO official named Rajeswari led to this victory.

Labour unions followed this evil practice unhindered till 2018 and are using brute force since then. Recognizing that gawking wages are an insult to honest workers the world over, Nokku Kooli was abolished on May Day, 2018. It was just another communist publicity stunt and the mafia is now aided and abetted by the same communists and flourishes even today.

The cargo that came was huge and it was evident that it could not be unloaded without the help of huge cranes. Unionists set up their illegal sheds near major sites and monitor vehicle and cargo movement. They usually wait for the owners to unload and then appear and demand obscene amounts.

Such militant unions still ply this illegal trade all over the state. In the interest of self-preservation, even the ordinary citizens handling their own house shifting end up paying. Usually, the drivers and the cargo owners are beaten up but fortunately, that did not happen this time around but the criminals and the police did indulge in pushing and shoving.

The rot in the system was exposed last week when the Kerala High Court directed the state government to eradicate the practice of ‘Nokku Kooli’ which it said was damaging the image of Kerala. Justice Devan Ramachandran, who was hearing a plea of a businessman from Kollam over the issue, however diluted his own ruling by adding that the ‘rights’ of head load workers should be protected in a legal manner!

Sundareshan of Kollam had approached the court seeking police protection from ‘Nokku Kooli’. He was constructing a hotel building on his property and the leaders of the CITU (CPIM’s labor wing) and INTUC (Congress labor organization) stopped his workers from carrying out construction. Sundareshan had earlier refused to give ‘Nokku Kooli’ to these unions.

A 40-year-old massacre swept under the carpet