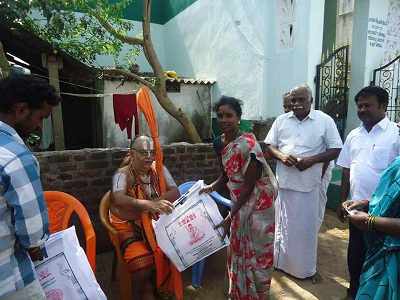 The verbal barrage of right wing twitter warriors on the Pejawar Yati Sri Vishwesha Theertha for holding Iftar in the mutt premises is still fresh in our minds. Recently, a mob of communists, Viduthalai Ciruthaigal and some fringe Muslim elements like SDPI assaulted Sri Chendalankara Sampathkumara Ramanuja Jeeyar at Palani. Both the incidents come as a shock and throw light on the attempts of ‘Breaking India forces’ to insult Hindu religious leaders.

Not long after the Palani incident, where the Jeeyar did nothing unlawful, comes the Frontline report on saffronisation of some states. The report says: “those who transported a few cows and calves in a lorry for a farmer came under attack,” talking about the Palani incident.

The truth though is different. As the Jeeyar was travelling from Mannargudi to Pollachi to take part  in a Samprokshanam, he happened to see a ‘load auto’ (as  said in a VCK member’s FB post) carrying ‘7 calves’ in front of his car. He intercepted the vehicle and took it to the local police station. As the carrier was too small for seven calves and didn’t have food or water for the animals, the  Jeeyar asked the police to make arrangements for a spacious vehicle with food and water (which is perfectly legal under PCA) as per this detailed local daily report .

After this, the situation quickly escalated as BJP, VHP and Siva Sena cadres too gathered in the place upon hearing the news. The Police delayed filing the case as per The Hindu report. As the Jeeyar tried to leave the premises, goons threw stones at his car, and a Siva Sena leader fainted, and five more people got injured.

At the end of the day, no case was filed on either of the groups, and the police let the same vehicle carry the cattle. Both the buyer and the transporter seem to be Hindus. The farmer is an OBC as per the FB post by a VCK member who was present in the station. VCK is a party that claims to work for Dalits against the ‘caste’ Hindus. What got the combination of communist, Dalit and Muslim organisations to help a caste Hindu and attack a Hindu spiritual leader?

One needs to know the works of Sri Chendalankara Ramanuja Jeeyar to know the answer to this question. He is the current Jeeyar of Mannargudi Chendalakara Shenbaka Mannar Matha, one of the 13 matha established by Manavaala Maamunigal.

The mutt had been without a Jeeyar for 125 years until Sampathkumara Ramanuja  Jeeyar took charge. As soon as he took charge, he began fulfilling the duties that are the characteristics of such a guru – propagating the Hindu Dharma to people particularly between the Thirukulathor (Sri Ramanujacharyar called SC/ST as Thirukulathor). He has travelled to more than 300 villages across four states and performed Mangalaasasanam (worship) in more than 50 Divya desams. He took it upon himself to spread the values of Hindu Dharma, simple ways to perform puja, the culture of Bharath and Gau Raksha. The matha has a ‘Goshala’ that takes care of 51 cows and bulls.

He has been campaigning widely for Gau Raksha and helping out villagers by teaching the practical uses of cow dung. He has performed Pancha Samskaram (Samashrayanam) for hundreds of people including those from SC/ST communities. The Jeeyar spreads awareness about the conversion activities by the organised religions as well.

Last August, he solved a misunderstanding between two communities in Kallimedu near Vedharanyam. While HR & CE officials escalated the situation by saying that they cannot change the traditions & only through the court can they obtain their rights, the Jeeyar  held talks with both the communities and solved the problem by performing Lakshmi Homam in the temple. What is to be noted here is that some anti-Hindu elements tried to exploit the situation by making it out to be a caste issue and sought to convert the affected party into their religion.

The Jeeyar had also organised Flood Relief Camps after the 2016 floods with the help of Vedic Foundation (a US registered NPO that helps tsunami victims by donating boats, vessels to fishers; constructing temples for them; giving notebooks to Adi Dravida school children). He personally went from house to house in the affected areas (SC/ST colonies) and ensured that the aid reached them. I need not remind the readers how missionary mafia takes advantage of calamities to swoop like vultures to harvest souls.

The Jeeyar also campaigned in Cuddalore, Villupuram and Pondicherry last December to spread awareness about religious conversions. He has been going to the SC/ST colonies and performing Lakshmi pooja in their houses.  He says “The poor should be respected. They are part of our culture and traditions. So they should be incorporated in the customs. This is the motive/aim of my tours”. The villagers returned the respect and affection via a rousing welcome with Poorna Kumbha Maryathai, Paatha pooja and recitation of Thirupalandu and Sri Vaishnava Bhajans.

When 'rationalist humanists' sat in their houses and preached, this is what he was doing during the floods pic.twitter.com/im3u4yWcsw

Now you know why the Guru was attacked in Palani. All of this is seen as a threat to the carefully fabricated secular nature of TN. The Frontline magazine report quotes M.H. Jawahirullah of TN Muslim Munnetra Kazhagam as saying “Though the DMK has been opposing the Hindutva agenda, it should activate its rank and file to fight against the oppressive forces at the grass root level”. One must remember that this M. H. Jawahirullah is one of the founders of Al Ummah, the Islamic fundamentalist body behind 1998 Coimbatore bombings. He is also the same person who was let off by the High Court from going to jail in an FCRA violation case because he was observing Ramzan fast. Such are the people who stand against our Gurus.

Hold fast Hindus, as the ride ahead is surely going to be a bumpy one. Time is ripe for Veera Shaivam and Veera Vaishnavam to make a comeback together in Dravida heartland just like its ancient days of glory.