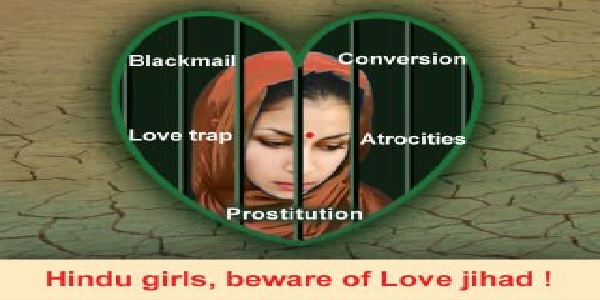 Another distressing case of Love Jihad, aka entrapment of Hindu girls & women by Muslim men through deception & fraud, has come to light, this time from Jharkhand.

Dainik Jagran reports that Manisha Yadav of Azamgarh, UP, met truck driver Ramzan Ansari who introduced himself using the Hindu alias Akhilesh Yadav. Ansari is a resident of Pipra village, Charhi block in Hazaribagh district of Jharkhand. They married each other according to Hindu rituals at a temple.

After marriage, Ansari did not bring Manisha to his home in Pipra but kept her at Irba, a place near Ranchi. When he finally brought her to his village, she found out he was an already married Muslim man. She was forced to convert and become Shabnam, and the two underwent a nikah (Muslim marriage governed by Sharia law) in the presence of Ramzan’s uncle and aunt.

Soon, their first child was born, a daughter who is now 3 years old. When she was pregnant with their second child, she was subjected to physical harassment and regular beatings by Ramzan. When she protested, she was given ‘triple talaq’ by him and kicked out of the house.

Currently Manisha aka Shabnam is staying in a lodge in Ranchi and working in a factory to earn for herself and her two infant children.

Manisha has also complained that once when she was trying to trace her husband, she came to Charhi and did not have enough money to return to Ranchi. Charahi police gave her the bus fare, but then the bus she was travelling was stopped by some goons and she was thrashed brutally. This hints at some nexus between the local police and Ramzan Ansari.

The Charhi police staion in-charge Dineshwar Prasad told Jagran, “The woman narrated her entire story but is not willing to file a written complaint. She still sympathises with her ex-husband. She is only demanding an alimony of Rs. 3,000 per month and Rs. 40,000 committee (sic) money, that Ansari is ready to pay. Hence we are not filing any case.”

1.) Even if there is no written complaint, why isn’t the police acting against a marriage carried out through fraud & deception?

2.) When the woman has complained that she was beaten up by goons sent by her husband, why didn’t the police act?

3.) Why is the police willing to believe the oral promise of a man who even hid his religion for marriage, that he will pay regular maintenance to his wife?

4.) Despite such a clear case of fraud and mental & physical harassment of the woman, is the police waiting for something even worse to happen to her before they take action?

Liberal mafia of Lutyens’ Delhi will scream till their face turns blue and deny Love Jihad by cherry-picking few examples of inter-faith marriages between consenting, fully-aware adults, but they will keep ignoring the Manishas of the world as it doesn’t suit their distorted worldview and Nehruvian ‘idea of India.’