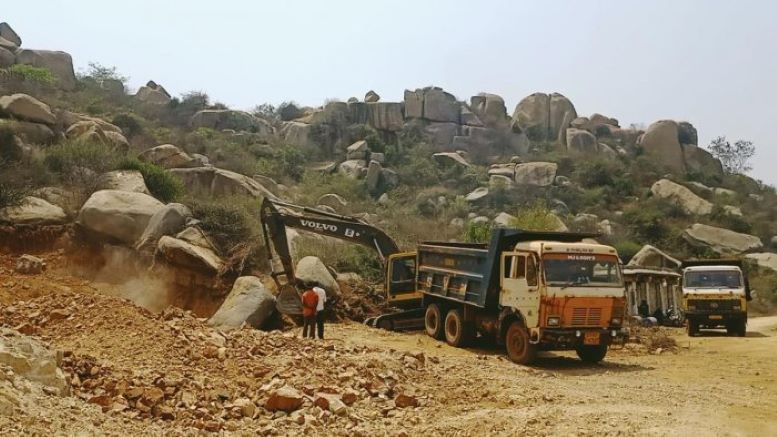 Hampi is the latest heritage site to suffer from the apathy of civic officials who allow mindless construction activities around sites that are to be preserved.

According to the report of Deccan Herald:

The Vijayanagara monuments are crumbling, courtesy of official apathy and unplanned civic works. A week after a portion of a fort near Kamal Mahal came crumbling due to unabated construction activities, extraction of mud for road works has damaged yet another fort of medieval times near Shiva Temple in Talavara Ghatta on Saturday.

The region, which lies under the Hampi core zone, saw use of heavy machines and earthmovers to extract mud bringing down a portion of the fort. The mud extraction also poses a threat to the Shiva temple which is just 25 meters away.

Vishwanath Malagi, president, Vijayanagara Smaraka Samskruti Samrakshana Sene, told DH, “In a similar activity a fort near Kamal Mahal got damaged. It seems, the authorities have learned no lessons… Indiscriminate mud extraction at the site close to Shiva Temple, laced with huge stone boulders, has damaged the fort. The temple is also facing threats from the precariously placed stones. This apart, the region is home to sloth bears and leopards. Unabated construction activity will have an adverse impact on the animals endemic to the region.”

The Archaeological Survey of India should take immediate steps to stop construction activity and use of heavy machines in the core zone, Malagi of the citizen forum fighting for the restoration of Vijayanagara monuments urged.

When contacted, P Kalimuthu, Deputy Superintendent, ASI (Hampi Circle) said, “No damage was done to the fort. Mud is being extracted and transported for road works. The activity will not hurt any monument.”

Earlier it was reported as to how blasts during mining activities had caused damage to the centuries-old Yaganti temple in the state of Andhra Pradesh (AP). Archaeological Survey of India (ASI) which is tasked with the protection of precious heritage monuments displays apathy towards Hindu heritage structures while repairing and restoring mosques and tombs of Islamic invaders.