Dravidian Anti-Hindu Protest Under The Garb of Anti-Brahminism Barely two weeks has passed since “Hindus in TN fight against Breaking India forces” article showed how the revival of Hinduism and the unification of Hindus by revered seers has irked the Breaking India forces and sent them into a frenzy. In that article, a leader of TN Muslim Munnetra Kazhagam and the founder of Al Ummah (the Islamic fundamentalist body behind 1998 Coimbatore bombings) M. H. Jawahirullah was shown saying, ‘the DMK, which has been opposing the Hindutva agenda to activate its rank and file to fight against the oppressive forces at the grass root level’.

It appears that the message was well received as DMK has activated its parent organization Dravida Kazhagam to take proper measures. Thanthai Periyar Dravidar Kazhagam (TPDK), is a splinter group of Periyar Dravidar Kazhagam that split from Dravida Kazhagam, which is the mother of most of the separatist, anti-Hindu organizations in TN. TPDK tried to burn the effigies of Lord Rama, Sita and Lakshmana on Vijayadasami (Dussehra) last year, to show their opposition to ‘Aryan Invasion’ which is a well known stick to beat the Brahmins, despite of it being rubbished by historians time and again. TPDK is a “Breaking India” organization that has taken up the task of ensuring that TN Hindus are prevented from unification.

Recently, this organization planned to make pigs wear the sacred thread on Avani Avittam(a day on which Brahmins change their janeu) claiming it to be a protest against brahminism. The images of walls painted with invitations to this protest have been circulating in the social media for the past few days. The paintings advertising this event were erased by the police based on complaints. The same walls were then painted by Hindus with phrases supporting the PM and BJP. 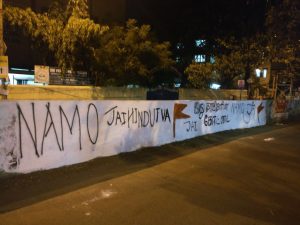 In reply to this, TPDK has created a poster of a pig wearing the sacred thread with Saiva and Vaishnava tilaks (Pattai and Naamam) smeared drawn across its body. While nothing better can be expected from those who damage murtis in the name of anti-superstition, what is curious is the fact that The News Minute has chosen to report this event even before it took place which could be understood as the news outlet helping TPDK publicize this event.

TNM has proved its allegiance to the Breaking India forces when it reported about the Jallikattu protest, IIT beef fest and the much criticized article on how North Bharat states feed on South Bharat states’ revenue which was used widely to create a separatist agenda and trending of “#Dravidanadu”. With this promo article on such an atrocious attempt at deriding Hindus TNM seems to have perfected its anti-Hindu image as well. They even tweeted the offensive poster brazenly as their earlier attempts at offending Hindus had gone unchecked. 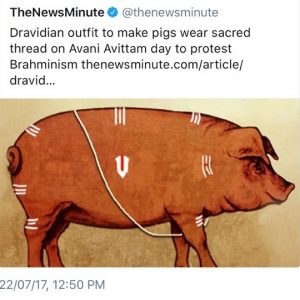 The article quotes a member, Manu (how ironic!) of TPDK saying “With the BJP at the Centre, the RSS which is basically a Brahmin outfit has gained too much power” and there has been “a dip in the resentment towards Brahmins over the last decade” which necessitates the provocation of a peaceful Hindu community. TPDK feels that this is the need of the hour since it’s their opinion that ‘there will be efforts to suppress the lower caste’ when a self made man with RSS background and a dalit is set to decorate the highest constitutional post of Bharat. Such reasoning makes one wonder whether RSS and BJP are gaining the trust of TN public against all the attempts by such fringe groups to discredit them.

TDPK secretary K.Ramakrishnan (irony again since he opposes Aryan Invasion by burning effigy of Shri Rama) in his interview to Patirikai.com says “Even if it is the caste Hindus who indulge in committing crimes against low caste Hindus, Brahmins were the ones who sowed casteism to begin with and they are trying to keep the other Hindus from uniting”. He says that this protest is to help the simpletons understand that the so called non existing Brahminism still exists. What is intriguing is that he agrees that the ‘oppressed’ whom he claims to fight for, have opposed and criticized Dravidian ideology’s anti-Hindu, anti-brahmin acts. There has been much support expressed in favor of Brahmins against these anti-Hindu forces in social media now-a-days which Mr. Ramakrishnan accepts. Yet he wants to prove that they are wrong and the Dravidian outfits are right in deriding hinduism in the name of anti-brahminism.

This further proves that the social justice warriors think that the ‘oppressed’ as they call them cannot think on their own or can be easily fooled by 3% Brahmins. As a result, these warriors should think and fight for them. If this isn’t oppression then what is? So despite the people who they claim to fight for opposing their politically motivated protests, Dravidian outfits repeatedly insult Hindu beliefs and practices to please their overseas masters. It is a well-known fact that Dravida Kazhagam is closely associated with bishop Ezra Sargunam, the place of whose alleigance is known by everyone across the state.

S. Kumaran, the Chennai president of TPDK has been quoted in TNM as, “Brahmins wear the poonool because they want to differentiate themselves from other castes & make themselves seem superior”. This shows their agenda behind this protest for it’s not only Brahmins but potters, carpenters, goldsmiths, valluvars and a part of parayar community also wear the sacred thread. The aim of this protest is to insult those who wear the sacred thread by making a pig wear it because the society views being compared to a pig as an insult. Since the communities that wear the sacred thread include various communities we can say that it isn’t only against Brahmins but against Hindus in general.

The fact that they chose to paint thiruneeru & thiruman on the pig proves once again that their aim is deriding Hinduism in the garb of anti-brahminism because Thiruneeru & Thiruman are worn by Hindus of all communities / castes. This offends Hindus in general.

One of TPDK’s members M. Kumaran says that “Nowhere in the vedas does it say that nobody but Brahmins can wear this thread”. But that it isn’t socially accepted when other communities wear it. This confuses as to whether they really are opposing the custom of wearing janeu. Because what Mr.Kumaran has said is true. The vedas have nothing to do with Upanayana. Shastras that speak of Upanayana mention the initiation process for all four varnas. The Baudhayana Grihya sutra in verses 2.58 & 2.59 states the teacher to “ Let him initiate (to school through Upanayana ) a Brahmin in spring, a Kshatriya in summer, a Vaishya in autumn, a Sudra in the rainy season; or all of them in the spring.”

It is not the first time that DK groups have misrepresented the facts when it comes to Hinduism but this time they seem to have gone far by showing their contempt for things that represent Hinduism irrespective of it being related to Shaivism or Vaishnavism. This is only going to result in Hindus as a whole going against the DK groups, making them stand alongside the Brahmins against this anti Hindu bigotry. These Breaking India forces and the news outlets like TNM who encourage and provide platform to this anti-Hindu mindset should be thanked for uniting Hindus on the face of this war against our glorious civilization.