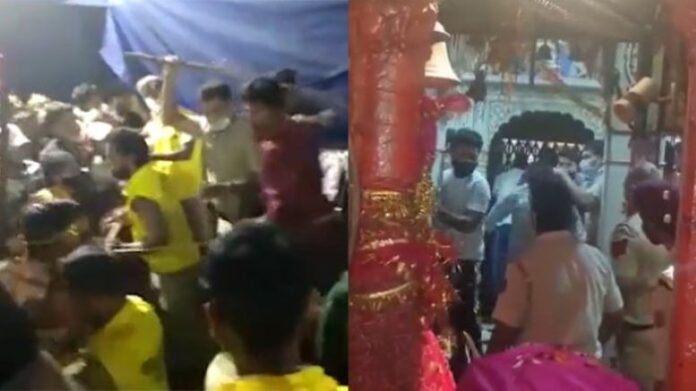 Visuals of police brutality on devotees of Kalkaji Mandir bring home the point that the continued atrocities of the Bharatiya state on Hindus just do not stop. In the guise of Covid-19 regulations, we have seen Hindu festivals banned or severely curtailed through bizarre guidelines while festivals of ‘minorities’ get exemptions from government and Supreme Court alike.

An undated video on social media (SM) shows Kalkaji Mandir devotees being assaulted by the Delhi police raising questions regarding the lack of sensitivity in dealing with devotees. Claims have also been made of temple doors being closed for devotees. In this regard, a video showing police using batons on devotees outside the temple gates is also in circulation.

A temple priest has been quoted by OpIndia as saying “Our Temple has a history of over 5,000 years. Our ancestors have been serving in the Temple since the time of Mahabharata. Our ancestors and now this generation has managed the Temple perfectly without any problems. The Temple’s gates were never closed for the devotees. However, today, the administrator that has been placed by the High Court has closed the Temple from all sides. The Police personnel assaulted the priests”.

As per available information, the temple had been shut by the administration citing violation of DDMA rules. It further alleged that devotees were being allowed entry into the garbagriha which isn’t permissible. One of the priests named Deepak Bharadwaj appealed to the administration to aid in better management during festive celebrations rather than totally denying worship rights by shutting down the temple.

Justifying police action in the matter, South East Delhi Deputy Commissioner of Police stated that the video has been shot at the beginning of Navratri where police had to resort to applying force to move the crowd as devotees had gathered in huge numbers at the Kalkaji Mandir. They further said that arrangements were made to ensure that the rest of the Navratri festival was managed in a better manner.

Twitteratis weren’t happy with the police attempts to justify the violence using ‘excessive crowd’ as an excuse.

One of the users even pointed out how such highhanded police behavior is reserved for Hindus alone.

Interference by judiciary and government into Hindu religious affairs has been continuing unabated despite appeals from various quarters to free temples of government interference. Even the Kalkaji Mandir is now embroiled in litigation where the apex court has stepped in and would be hearing an appeal against the Delhi high court (HC) order calling for the removal of unauthorized occupants and encroachments. It is pertinent to point out how the judiciary is interfering in temple administration matters as is evident from the order.

In this regard, a report by LiveLaw states:

…Earlier, the Court had expressed concerns over the “dismal” maintenance of the temple and had also asked the local commissioner, appointed on the last date, to ascertain the collections/donations made to the Temple and check whether CCTV cameras installed inside its premises are operational…

…The Court had appointed a local commissioner for paying surprise visits in the Temple in respect of ascertaining conduct of ‘puja sewa’, collection of offerings being put in donation boxes and also other issues regarding cleanliness, hygiene and facilities for devotees…

…On a Special Leave Petition moved by shopkeepers against Delhi High Court’s order dated October 9, 2013, directing the municipal authorities to demolish unauthorised constructions within the Kalkaji Premises, the Supreme Court bench of Justices BS Chauhan and Dipak Mishra had stayed the High Court’s order on October 12, 2013.

The matter sub judice before the Top Court was last heard by the bench of the then Chief Justice Dipak Mishra, Justice AM Khanwilkar and Justice DY Chandrachud on April 2, 2018.

Speaking on the occasion of Vijayadashami, RSS Chief Mohan Bhagwat raised concerns regarding the state of Hindu temples. “State of the Hindu temples today is one such concern. Temples of South India are fully controlled by the state governments. In the rest of the country some are managed by the government, a few through joint family trusts while some are run by the trusts governed under society’s registration acts. Few temples completely lack any system of governance”, Shri Bhagwat said.

He made an important point of how Hindu temples across the country aren’t the same and hence there was a need to come up with a detailed temple management system to ensure that Hindu temples are well-managed. He also emphasized the need for temple reins to be in the hands of Hindus.

The Kalkaji Mandir issue further highlights the need as to why Hindu temple management shouldn’t be left in the hands of the judiciary or the government. A central body on the lines of the SGPC or the Waqf board needs to be created so that Hindu society is allowed to manage the affairs of Hindu temples.