Dalit Youth Amit Gautam Hacked to Death by 5 Muslim Thugs in Hathras, UP 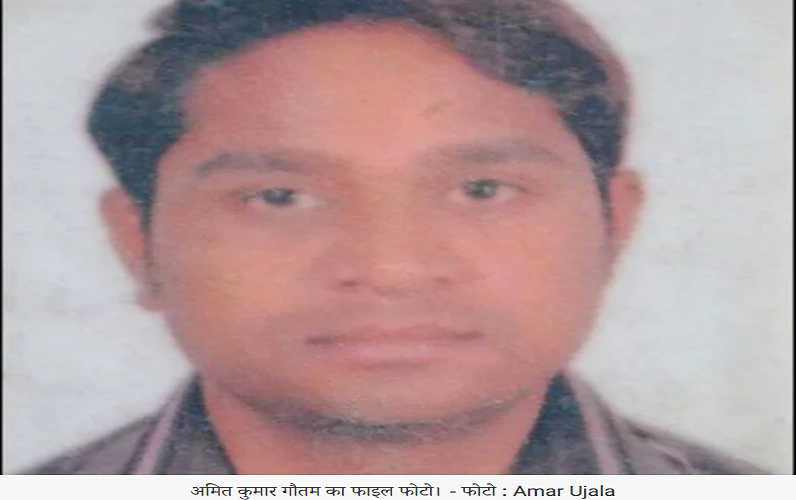 A 27-year-old Dalit man was mercilessly hacked to death in UP’s Hathras by a group of Muslim men. His body was found outside the local mosque. Police has registered a case against 5, including history sheeter Aalam.

Amit Kumar Gautam, son of Rajkumar was the eldest among his four brothers. He had done diploma after completing his graduation and was working as a POP contractor. He was married and was also keen on training his wife Ruby to get her into a police job to make her self-dependent. His pregnant wife is now left with no source of income after his death.

Amit, resident of Khandari Garhi in Hathras, didn’t have any enemy but residents of Masjid Chowk, Aalam and his friends always had ill-will towards him, his father Rajkumar told Jagran. They deliberately wrangled with him without any reason.

Amit was returning home on his bike on 27th of January when Aalam and his friends stopped him on his way and started bickering with him. Rajkumar told that then he himself arrived at the scene and sorted out the matter.

Amit left his home on Monday afternoon (29th Jan) for getting his id-proof corrected. When he didn’t return till late evening, people started looking for him. His corpse was later found on Tuesday morning near the accused’s house in Masjid Chowk.

His body was found stuck below an iron gate. The head was crushed and marks of marks of sharp weapons were found on his neck. Stains of blood were found on the nearby roads and walls. Broken sticks were found in the drain. The gate of a nearby under-construction building was found broken. It’s evident that many people were involved and a lot of noise would have occurred during the murder. Amit too would have cried out for help. Shockingly, nobody in the colony heard anything and police have not found any eye-witness.

Amar Ujala has reported that Amit had mortgaged his bike with Aalam, and this led to the dispute between them. Aalam and his friends attacked Amit on Monday to seize the bike, and ended up murdering him in the process.

The corpse was recovered by Hathras Gate SHO Anil Kumar. SP Sushil Ghule and SSP Dr. Arwind Kumar inspected the crime scene. The victim’s family is extremely agitated over the incident and the fact that no one from the area came forward to help Amit.

Rajkumar has registered a complaint against Aalam, Saddam, Khalid, Sukel and Aashu. Police has taken Aalam and Saddam into custody.

Amit’s wife and mother were inconsolable at the post-mortem house. After post-mortem, Amit’s body was taken to Ambedkar Park on Aligarh Road for cremation. Amit’s maternal uncle is a CO (Circle Officer) in UP Police while his father-in-law is a Sub-Inspector. The cremation was carried out under tight security after all his relatives, including sister, had arrived.

Within a space of a week, we have seen two cases of a Hindu youth being beaten to death on the street by Muslim perpetrators. Whether it is Amit Gautam of Hathras or Ankit Saxena of Delhi – the common thread is the utter apathy of the neighborhood and law enforcement as these crimes took place. In Amit’s case, he was beaten to death right outside a mosque – all imams and maulvis in the country never tire of telling us how Islam is a ‘religion of peace’…so why didn’t any peace-minded person from the mosque or adjacent areas think it fit to end the brutal violence taking place right outside their house of worship? Why didn’t anyone at least inform the police – the corpse was only discovered on Tuesday morning?

This is not the first case when a Dalit family has suffered the wrath of Muslim aggression, and it won’t be the last. Hindu Post has continuously reported on how Dalit families are persecuted in Muslim majority areas. Where are the Dalit activists, the advocates of Dalit-Muslim unity and self-appointed leaders like Jignesh Mewani, Rahul Gandhi and Umar Khalid? Will they speak up to get justice for Amit’s family, or will they reserve their outrage only for select incidents like Rohith Vemula suicide, Una flogging and Bhima Koregaon, as part of their Dalit politics?