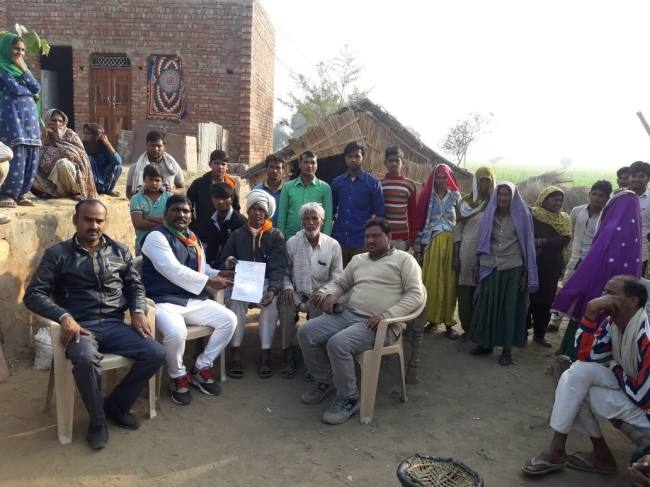 A Dalit family in the Mohlaka village of the Nagina Khand region in Mewat Haryana was brutally attacked by Muslim villagers for refusing to convert to Islam. Casteist slurs were hurled at the family, and girls were sexually harassed. Victim Shrikishan suffered severe injuries. Police has registered a case against 5 accused including a woman. Reportedly, other residents of the village have also had similar grievances in the past.

According to Shrikishan’s police complaint, he and his family has been living on a BPL plot given to him by the panchayat. Islam, who is also a resident of the same village, has occupied nearby land illegally and has been threatening him since that if he has to live in the village, he must accept Islam.

When Shrikishan opposed the atrocities on his family, Islam along with his wife Asmina and other companions (Tarik, Mausim, Ataru) attacked them with sticks and other weapons on January 15th. He threatened to kill them if they refuse to accept Islam. Shrikishan and his family members have incurred grave injuries during the attack.

Shrikishan also alleged that Islam has been declared an absconder in a different case and also possesses several illegal weapons.

Shrikishan and his family members are frightened after the incident and have requested the authorities to provide them adequate protection. The victims have also alleged that the police is persistently trying to bury the case. They said that certain Muslims of the village are pressurizing the authorities to do so.

Members of Mahrishi Valmiki Foundation reached out to the family after the matter came into light. The family burst into tears and narrated the whole incident to the members. They were terror-stricken and pleading for justice. The members of the foundation assured the family members that they will not let the case be buried under any condition. They said that they would meet the Chairman of National Commission of Scheduled Castes regarding the incident. Also, letters would be written to President Kovind and PM Modi regarding this matter.

The village has a population of around 3000. Except seven Hindu Dalit families, the rest of the population is Muslim. Before this incident, another Dalit Hukumchand lived in the village on a BPL plot. He too was pressurized and threatened to convert to Islam. Under rising pressure, he finally had to give up and leave the village.

This is not the first case of its kind in the region. Several other cases of forced conversion have previously been reported in the Mewat region. In one of the cases, two teachers of Model school were accused of forcing Hindu students to read namaz. Other cases of forced conversion have also been reported in Kulheda, Bhakdauji and Padla Shahpur villages before. Poor families were forcefully converted in majority of these cases.

While the mainstream media never leaves any stone unturned in highlighting events that incite violence among Hindu community, it has maintained a complete silence over this issue. English media, which is very often seen peddling false propaganda against Hindu Dharma under the pretext of championing the Dalit cause, has done minimal to no reporting regarding this incident. Self-proclaimed Dalit leaders like Jignesh Mevani, with their leftist agenda to create a ‘Dalit-Islamist’ alliance to fight Hindu Dharma, have also maintained a silence over this issue. This was also pointed out by people on social media:

Dear @jigneshmevani80. Meet Shrikishan. He is a Dalit. He along with his family was beaten with iron rods & almost lynched by Muslims for not converting to Islam. Shrikishan received serious injuries. Would you go and meet him? He needs your support. https://t.co/BScQN1ECoh pic.twitter.com/djUAO6XMLQ

UPDATE. Dalits who were BRUTALLY assaulted by a Muslim mob for not converting now demand protection, say the police are under pressure to not act.@jigneshmevani80 maybe unconcerned of their plight but Valmiki Foundation has met the injured Dalits. https://t.co/ied1YH386q pic.twitter.com/nsSvdb0BAF