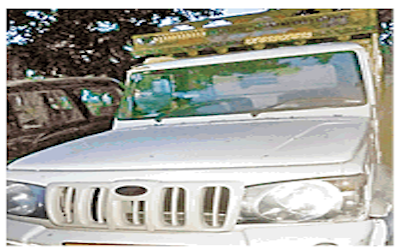 Police inspector CP Singh had a narrow escape last Saturday when he was shot at by cow smugglers in Chandaus, Aligarh district, UP. The smugglers also rammed their Max Loader pick-up vehicle into a police bike, as per a report in Hindi daily Dainik Jagran.

Chandaus Inspector CP Singh was on patrol with other policemen at 11 PM when he saw 4-5 people trying to load a cow into a vehicle near village Jamunka. As soon as the men saw police, they left the cow and started firing.

Police chased the smugglers’ vehicle in their jeep and bike. As soon as they were about to overtake the pick-up, the smugglers rammed into the police bike causing it to fall into a ditch. The smugglers then managed to flee on foot under the cover of fire.

A complaint has been lodged against unknown persons for attempt to murder and under other sections of the law against cow smuggling.