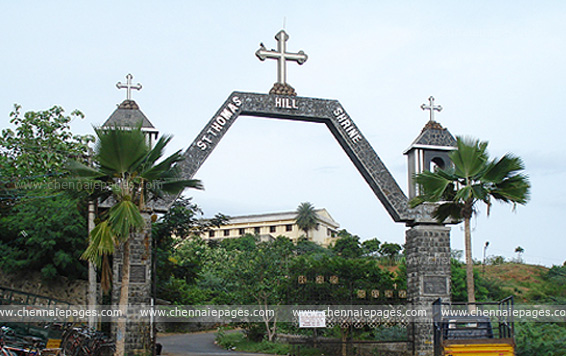 A tweet series on popular St. Thomas Mount in Chennai caught social media’s attention recently. This Mount is a beautiful hill located close to Chennai international airport. Many Christians in Bharat believe the myth that Thomas the Apostle stayed and was ‘martyred’ on this hill, although researchers and scholars have found no evidence to back this claim. The St. Thomas Garrison Church is located at the bottom of this hill. A shrine dedicated to Mary was supposedly built in 1523 on top of the mount, by invading Portugese colonials. A flight of 160 steps leads up to the summit of the mount.

The tweet series mentioned that off late the shrine management has started restricting people who wish to come to the hill for activities other than praying; boards have been put up banning activities like walking, jogging, exercising etc on the hill. As mentioned in the tweet series, this board restricting entry has been put at the foot of the hill which clearly says morning and evening exercises are ‘banned’ on the hill : 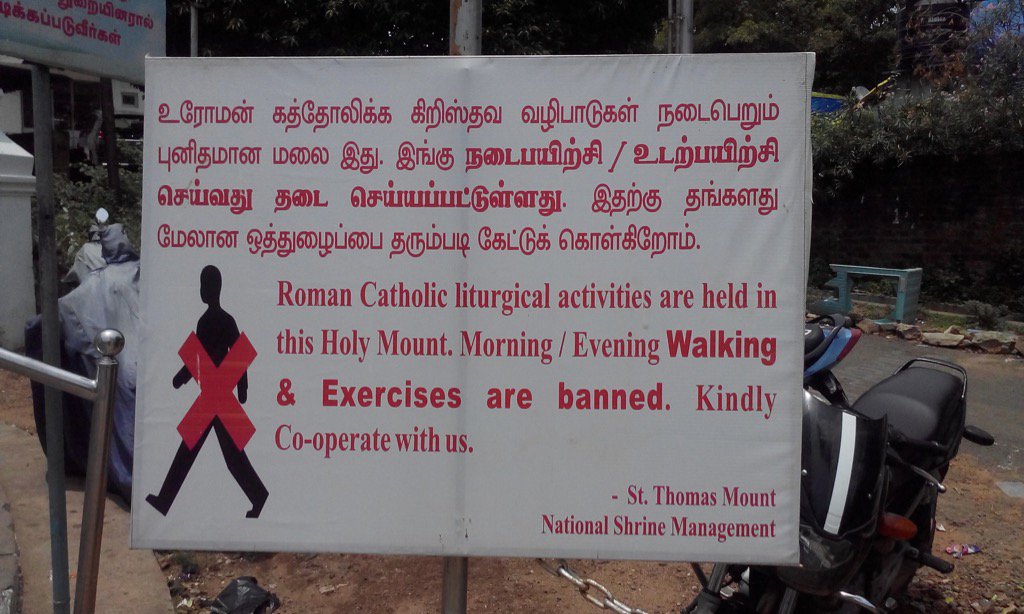 Hindupost spoke to Mr. G. Christuraj, who is the Parish Priest & Rector at St. Thomas Mount National Shrine about this issue. We asked him if such boards have indeed been put aimed at banning the usual activities of residents / visitors other than praying, and if the the entire hill is owned by the shrine management.

He confirmed that boards have been put up at both gates at the bottom of the hill to prevent morning/evening walking and exercises. The reason he gave is that people were misusing the ‘privilege’ granted by the Church Management, and disturbing the prayer activities. He said that people can still access the hill for walking, jogging, exercises on the following conditions –

1. They should be ‘appropriately dressed’.

2. They should avoid coming during Church prayer times (morning, noon and evening).

3. They cannot come right to the top where the shrine is located unless they wish to pray.

Mr. Christuraj claimed that the entire hill is owned by the Archdiocese of Madras – Mylapore, which comes under the Roman Catholic Church of India. It was originally ‘owned’ by Portuguese missionaries who transferred control to the Church. He also added that locals themselves have expressed concern that some were using the hill as a ‘lovers park‘, and hence the management had decided to take this step. He also confirmed that Army’s OTA (Officers Training Academy) too uses the hill at times (around once a month) but that is done with permission of the Church management.

It is surprising that large pieces of land are still under the exclusive control of various churches in Bharat, which were allotted to them as grants by British and other invaders. Unfortunately, these parts of land were not nationalized after independence. In various states, land reforms were effected which aimed at distributing the land evenly but it seems that land owned by Churches was not touched. There are very few details available on the internet and there is hardly any transparency in information regarding minute details of land owned by various Christian organizations and churches. As per this article written in 2014,  Catholic Church owns the largest portion of Bharat’s non-agricultural land. Note: this does not include the land holdings of the Protestant & other Christian sects.

According to the census of 2011, official records state Christian population as approximately 27.8 million, constituting 2.3 percent of total Bharat’s population. So organizations that control just 2.3% of population own the largest portion of land after government in this country. How much more skewed can the allocation of this most valuable resource be?

In the past, Catholic groups have expressed concerns and asked for a white paper on land dealings by the Church bishops and related powerful people, as this news report suggests. The Catholic Church in Bharat acts like a state within a state in the Union of Bharat yet gives its feudal allegiance to the Pope in Rome. Contrast this to the way many large Hindu temples are controlled by the Government, donations offered by devotees siphoned off, and temple lands sold/leased for a pittance or encroached by political-criminal mafias.

While the Church and its organizations exercise absolute control over land allotted to it by old colonial masters, pastors attempting conversions to Christianity have dared to enter holy Hindu lands like sacred Tirumala hills.

The Church in Bharat should seriously consider giving up a large chunk of its humongous land holdings, much of it in prime urban areas, which was bequeathed to it by European colonials who captured the same from natives. This land should be redistributed to benefit local communities. Or the Government has to take steps to nationalize this land bank currently under Church control, and use the same in a transparent manner for the nation’s development.