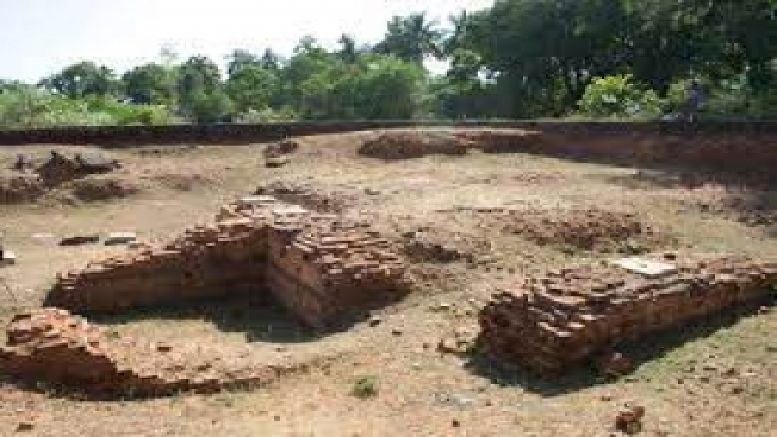 A Chola-period bracelet made of gold and copper has been unearthed during the second phase of excavation by the Tamil Nadu State Department of Archaeology at Maligaimedu near Gangaikondacholapuram.

The bracelet weighing 7.920 gm was found at a depth of 170 cm inside the A3 /2 quadrant. The bracelet, which measured 4.9 cm in length and 4 mm in thickness, was found in a broken condition and only one-fourth of the ornament could be excavated. It is the first precious object unearthed during the second phase of excavation.

Officials of the Department of Archaeology told IANS: “Only one-fourth of the bracelet could be found and the ornament clearly indicates the wealth of the Chola dynasty.”

The officials are confident that during further excavations during the coming months, more similar treasures would come out and that this would clearly authenticate the economic prosperity and cultural wealth of the Chola dynasty. Gangaikondacholapuram was the capital of King Rajendra Chola 1.

During the first phase of excavations at Maligaimedu in 2021, the structural remnants of a royal palace in the form of a brick structure and a large number of decorated roof tiles were unearthed.

Archaeologists attribute the presence of Chinese ware like porcelain from the site as an indication of the region’s trade with China.

Senior officers have during the first phase of excavation at Maligaimedu during 2021 said that the iron nails and roof tiles unearthed from the site were more than 1000 years of age.

At Keezhadi in the Sivaganga district of Tamil Nadu excavations had earlier unearthed creative artwork of wells with multiple terracotta rings and archaeologists have stated that these ring wells were more than 2000 years old.