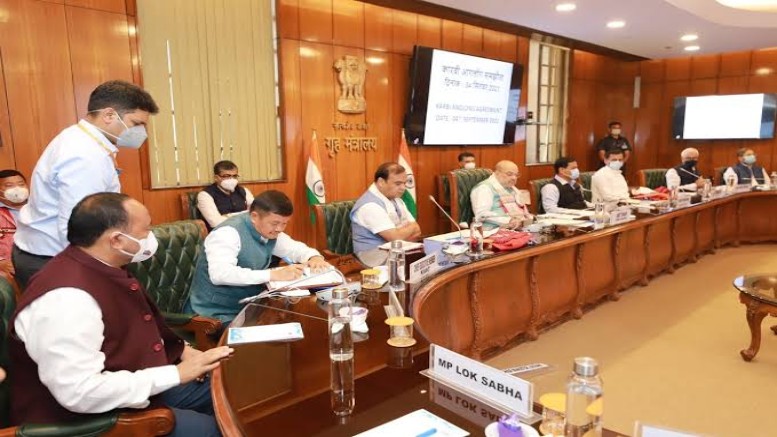 The Ministry of Home Affairs (MHA) on Saturday signed a tripartite ‘Karbi Peace Accord’ here bringing to an end the decades long agitation and unrest in Assam.

Describing the agreement as historic, the Union Home Minister Amit Shah said, “By signing the Historic Karbi Anglong Agreement, the Modi government is committed to resolving the decades-old crisis, ensuring the territorial integrity of Assam”.

Reiterating Prime Minister Narendra Modi’s vision of “Insurgency free prosperous North East”, he said that the government was committed to fulfil all promises made in the accord, and for rehabilitation of the surrendered cadre. He also said the Modi government will welcome any insurgents who want to give up arms and join the mainstream.

The Home Minister also said that the Modi Government will give a special development package of around Rs 1000 crore to undertake specific projects for the development of Karbi areas accord that has just been signed. This will be a golden day in the history of Assam,” Shah further said.

“The Government of Assam and the government of India are committed to keeping all the promises made in the accord. It is our policy to welcome anyone who wants to give up arms and join the mainstream. This is the reason why we are bringing an end to all the problems that we inherited from the previous governments,” Shah added.

Assam Chief Minister meanwhile said the Karbi Anglong agitation had as much mass support as the Assam agitation, and lauded the peace accord being signed.

The Karbi peace pact will ensure greater devolution of autonomy to the Karbi Anglong Autonomous Council (CAAC), protection of identity, language, culture of Karbi people and focussed development of the Council area, without affecting the territorial and administrative integrity of Assam.

The Karbi armed groups have agreed to abjure violence and join the peaceful democratic process as established by law of the land. The Agreement also provides for rehabilitation of cadres of the armed groups.

The Government of Assam shall set up a Karbi Welfare Council for focussed development of Karbi people living outside KAAC area.

The Consolidated Fund of the State will be augmented to supplement the resources of KAAC and the present settlement will give more legislative, executive, administrative and financial powers to KAAC.