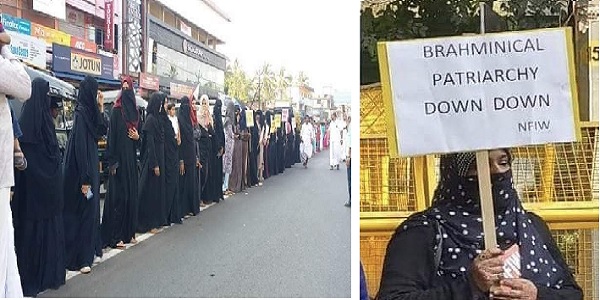 The Pinarayi Vijayan led CPM government has shown missionary zeal in ensuring that women in the 10-50 age group are somehow pushed into the Sabarimala temple. Akin to a precisely-planned military operation, two alleged CPM lady members in their 40s entered the Sabarimala Temple in the wee hours yesterday amidst heavy police security. The Kerala CM explicitly confirmed to media that the women entered the temple under police security.

Wearing Red Churidar Bindhu and the Blue one Ganagadurga. Bindhu is an advocate and both are members of CPM in #Kerala. A special permission issued by devasom board with a strong influence to police to provide full support till they come out , they entered through north entrance pic.twitter.com/o7wXcMQnlM

Ayyappa devotees across Kerala and the rest of Bharat have been peacefully protesting for the last few months, pleading with the Kerala Government to maintain status quo until the review petitions filed against the SC verdict are heard.

When the Sabarimala temples opened couple of months back, the Government ordered a brutal police crackdown to clear the protesting devotees who had gathered to prevent motivated activists like Kavita Joshua, Rahana Fatima & Liby from entering the temple. CPM leaders and rank and file, led by the CM, had come forward to abuse and slander the protesters as ‘casteists, fuedalists’, and the CPM mouthpiece Deshabhimani’s subEditor Jisha even urged her party workers to spit at the holy shrine.

On January 1, 2019, lakhs of women in Kerala formed a 620-km “wall” from Thiruvananthapuram to the northern district of Kasaragod. Organized by the Kerala government and the left aligned organisations, the wall was organised against the backdrop of the Supreme Court verdict on Sabarimala.

The programme called ‘Vanitha Mathil’ or women’s wall has been hailed as the renaissance to project a progressive and liberal outlook on gender issues in the state, and on the surface had no no reference to the Sabarimala shrine, reports The Indian Express. Minister for Health and Family Welfare KK Shailaja and senior CPM leader Brinda Karat stood as the starting and concluding link of the wall, respectively.

As per another report in The Indian Express, the entire ruling LDF cabinet, senior leadership of the CPM-led coalition, left-aligned intellectuals, writers, thinkers, activists and actors participated in the movement. Nuns of the Jacobite faction of the Christian Church were also present.

But this event looked more like an anti-Hindu protest instead of one for gender equality. Many burqa-clad Muslim women were seen as a part of this wall, holding placards against ‘Brahminical Patriarchy’. While Muslim women themselves aren’t allowed to pray at their place of worship, mosques, they are fighting against the so-called patriarchal traditions of a singular Hindu Temple!

A Woman-wall challenging traditions at #Sabarimala, was engineered by CPIM govt today to counter the lakhs of hindu women who protested the verdict.

The wall was useful. It fully exposed the panic & hate, craftily hidden by certain people till now. pic.twitter.com/nP7U51tQgY

Infact, there were contradictions among the women participants themselves. Ani, a housewife and a member of the KPMS from Vypeen, said she came for the programme to stand for the rights of women. “But in the Sabarimala issue, we are on the side of belief (which bars women of menstruation age),” she responded smiling. Her friend, Sarada, also from the same neighborhood, laughed and nodded.

Interestingly, this is what PM Narendra Modi said in an interview on January, 1, 2019, to ANI, “Every Temple has their own beliefs. There are temples where men are not allowed. We should read minutely what the Respected Lady Judge said on the Sabarimala case.”

Dissenting with the majority decision of the 5 judge SC bench, the sole woman judge on the bench Justice Indu Malhotra had stated “Religious practices can’t solely be tested on the basis of the right to equality. It’s up to the worshippers, not the court to decide what’s religion’s essential practice.”

It must be noted on December 26th, 2018, lakhs of Ayyappa devotees in Kerala formed a human chain with ‘Ayyappa Jyothi’ and upholding their stand of ‘Ready to Wait’.

However, no media covered this huge and voluntary event, while a whole lot of coverage has been given to women’s wall engineered by the CPM government.

It is to be noted that this is the same Kerala where a Catholic Bishop Franco Mulakkal of the Jalandhar Diocese was accused of raping a senior Kerala nun several times, and the Kerala police failed to even interrogate the accused Bishop until forced to do so by public pressure. No liberals or feminists came to her rescue, while everyone, from the government, leftists and non-Hindus are talking out and loud against Sabarimala traditions. If this isn’t a combined war against Ayyappa devotees & Hindus, then what is it?