Havildar Hangpan Dada from Borduria, Arunachal Pradesh laid down his life for the nation after killing three heavily armed Islamic terrorists. A senior Army official said on Friday that he was injured badly in an encounter with Islamic terrorists in north Kashmir’s Nowgam sector.

He displayed raw courage, unflinching grit, presence of mind and with utter disregard to his personal safety and despite bleeding profusely, discharged his duties and made supreme sacrifice for the nation, the official said. It was sheer grit and determination of 37-year old Havildar Hangpan Dada that saw him fight valiantly at the 12,000-feet high Shamsabari range to eliminate three heavily-armed terrorists who infiltrated into North Kashmir from PoK before he laid down his life. Enrolled in the Assam Regiment of the Army in 1997, Hangpan Dada was posted with the 35 Rashtriya Rifles, a force carved out for counter-insurgency operations.

The official said that the presence of mind of Dada saved lives of his team members who were coming under heavy fire from the terrorists. Below is a press release which describes the exemplary bravery shown by Havildar Dada –

His body was taken to his native village in Tirap district for the last rites with military honours. Havildar Hangpan Dada is survived by his wife Chasen Lowang, daughter Roukhin who will turn 10 on June 30 and six-year-old son Senwang. Governor of Arunachal Pradesh JP Rajkhowa said that the death of Havildar Dada reminds all of the extraordinary sacrifices made by people of Arunachal Pradesh in defence of the Nation. We will draw inspiration from his ultimate sacrifice and continue to strive towards safe-guarding our motherland. My thoughts and prayers go out to his family and relatives, he further said. 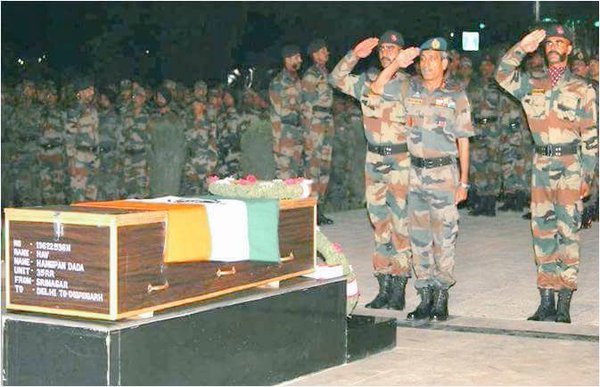 Chief Minister Kalikho Pul has deeply mourned the demise of 37 yr old Havildar Hangpang Dada. In his condolence message to the great soldier’s family, Pul said, “I am shocked over the tragic news of the death of a true martyr of the nation who gave his life guarding the nation’s border. I express my sincere solidarity to the bereaved family members and also to the Indian Army for the loss of their brave man, he said. Meanwhile, the chief minister has announced ex-gratia to the family members of Havildar Hangpan Dada.

We wonder what the likes of Kanhaiya Kumar and Prashant Bhushan, who view the Bharatiya Army fighting the Islamic terrorist insurgency in Kashmir as rapists and oppressors, will have to say about the supreme sacrifice of Late Havildar Hangpan Dada.

(This article has been curated from the following news source – http://www.arunachaltimes.in/brave-heart-arunachalee-soldier-martyred/)