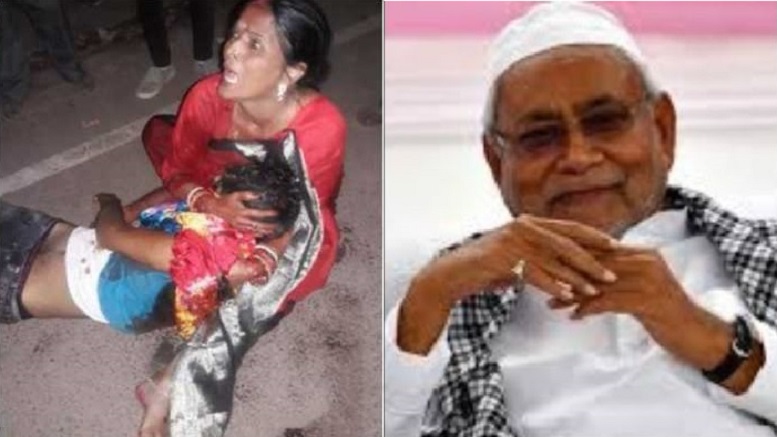 The family of Anurag Poddar, the teen killed in police firing during a Durga Puja immersion procession in Munger last year, continues to wait for justice. After dragging its feet for months, the Bihar government has finally paid the family the  Rs. 10 lakh ordered as compensation by Patna High Court. However, investigation against the accused policemen is proceeding at a tardy pace.

Accused sub-inspector Brajesh Kumar Singh who was absconding was recently summoned by the CID officials. And even though he turned up at their office, he was neither questioned nor taken into custody. He was merely asked to surrender his service revolver, possibly the one used in the killing, and then let go.

CID’s ADG Vinay Kumar who appeared in Patna High Court in this case said that the weapon has been sent to forensics. The court asked him why Brajesh Singh was not in custody and being interrogated, to which the ADG had no answer. This shows how casually the whole matter is being probed by Bihar Police. Apart from SI Brajesh Singh, two other cops have also been named as accused, but no meaningful investigation has been done against them too as yet.

On October 26th last year, local police brutally beat up Hindu devotees who participated in the famous Shadipur Badi Durga Puja immersion procession in Munger. Devotees were seen running to protect their Durga murti by encircling and creating a human shield to protect the deity from the police onslaught even as they were thrashed mercilessly with lathis and batons.

Local residents squarely blame this incident on the superintendent of police, Munger, Ms. Lipi Singh.
Hear them speak how the police started firing without warnings. Then the police didn't even help to carry the injured to the hospital.https://t.co/xTKlIHSUiZ

Usually, the immersion takes place three days after Vijayadashami but this time the cops were adamant to stop the procession from happening in view of the assembly polls in the area, which despite repeated requests by locals were not shifted to another phase. Can you imagine an election being organized during Eid, or a Muslim festival being banned/curbed to enforce model code of conduct for elections?

Following several complaints, the administration later agreed and Hindus were told to complete immersion the next day by 5.00 am. However, even this timeline was not permitted. Around 12 midnight, police asked devotees to hurry up which the latter objected to. A scuffle broke out and an incensed police force unleashed brutal violence on the devotees.

Not satisfied with a lathi charge, police fired into the crowd (no air firing or use of rubber bullets, mind you) and Anurag Poddar, a young 18-year-old Hindu boy, was shot in the forehead and died instantaneously. The horrendous visuals of the boy with his brain splattered all over his sindoor-clad mother’s lap evoked swift condemnation and shook the entire nation. Several others were badly injured and there were also allegations that the cries of those injured went unheard by the police present there.

With the whole world watching, former Munger SP Lipi Singh IPS went online the same night and claimed that someone from the devotees fired at the police and denied that it was her personnel who had shot and killed young Poddar! Embarrassingly enough for the police, even as she was fudging the story, the video clipping of the chilling police assault on devotees was simultaneously going viral.

SP Lipi Singh is the daughter of JDU’s Rajya Sabha MP Ram Chandra Prasad Singh, who is also the national president of JDU and an ex-IAS officer who was Nitish Kumar’s principal secretary at one time.

The then Deputy Inspector General of Police (DIG) Manu Maharaj ordered a Special Investigation Team (SIT) and we were told that police brutality would be investigated and appropriate action taken against the accused. The Election Commission (EC) sent Magadh range Commissioner, Asangba Chuba Aao, to Munger to investigate the case and submit a report on the findings in 7 days. He visited Munger and interrogated both the locals and the security personnel and submitted the report to the EC. His report remains out of public domain to date.

Unfortunately for Bihar police, the 20 CISF personnel who were ordered to provide backup for local police reported that local police had indeed fired to ‘control the crowd’, contradicting Lipi Singh’s version. CISF constables too fired 13 rounds.

The EC ordered removal of Lipi Singh, DM Rajesh Meena and Qasim Bazar station police chief Shailesh Kumar. By January 2021, after a two-month ‘suspension’, all three were transferred to new posts or reinstated.

On 7 April, the Patna High Court ordered the state to grant Rs. 10 lakh as compensation to Poddar’s family within a month. The administration had failed to protect the life of a citizen who was participating in the procession of Maa Durga Murti Immersion. The court noted that the ‘investigation’ from October to date uncovered nothing. It ordered a CID investigation under its direct monitoring and transferred all police officers associated with the case.

Shockingly, the Bihar government was not ready to pay even this simple compensation and it filed a petition in the Supreme Court challenging Patna High Court’s order to pay 10 lakhs to the victim’s family. Would they have taken the same path had the victim been from any other religious denomination? Thankfully, the SC threw out their petition stating “It is shocking that a young boy was shot.” A Bench of Justices Indira Banerjee and M R Shah observed that the police did not transparently investigate the case as the then Munger SP was a relative of a member of the ruling party.

On Wednesday, the Bihar government finally handed over the cheque of Rs. 10 lakh as compensation to Anurag’s father Amarnath Poddar.