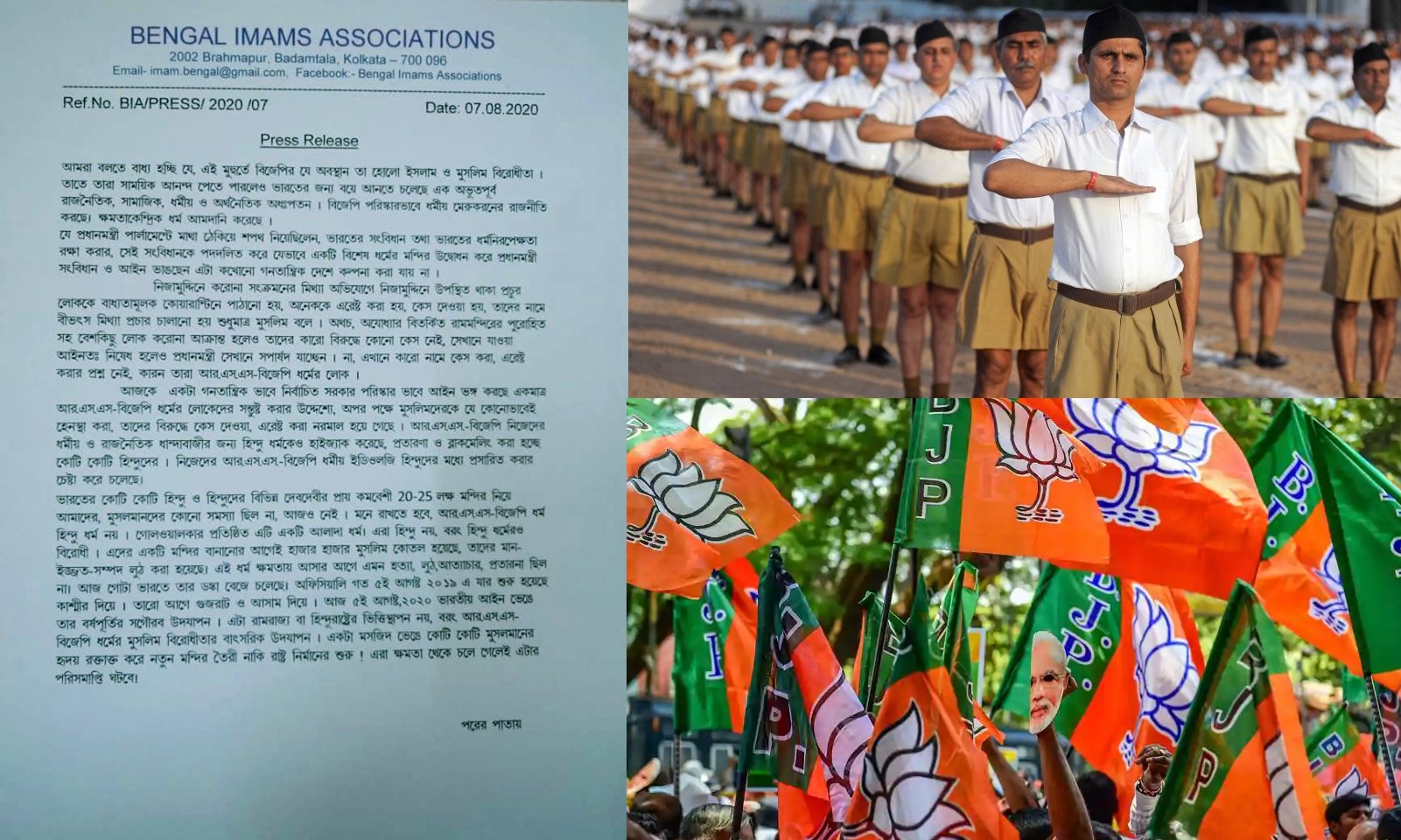 The Bengal Imams Association, on August 7th, 2020, issued a public statement through which they have warned the Muslims working with or for the BJP or RSS of severe repercussions if they continue their association with these Hindu organizations.

The statement asserted that in present times, the sole aim of the Bharatiya Janata Party is to ‘oppose Islam and terrorize Muslims’. This may provide momentary accomplishments to the political party but would be detrimental for Bharat’s economy, politics, social and religious wellbeing, it added.

They have also brought strong objections to PM Modi’s presence and participation at the Bhoomi Pujan of the Ram Mandir stating it was not suited for a Prime Minister of a secular democracy to participate in the religious ceremony of a particular religion. According to the claims made by Bengal Imams Association, by attending the Bhoomi Pujan, the Prime Minister has violated the Constitution as well as the law of the land. 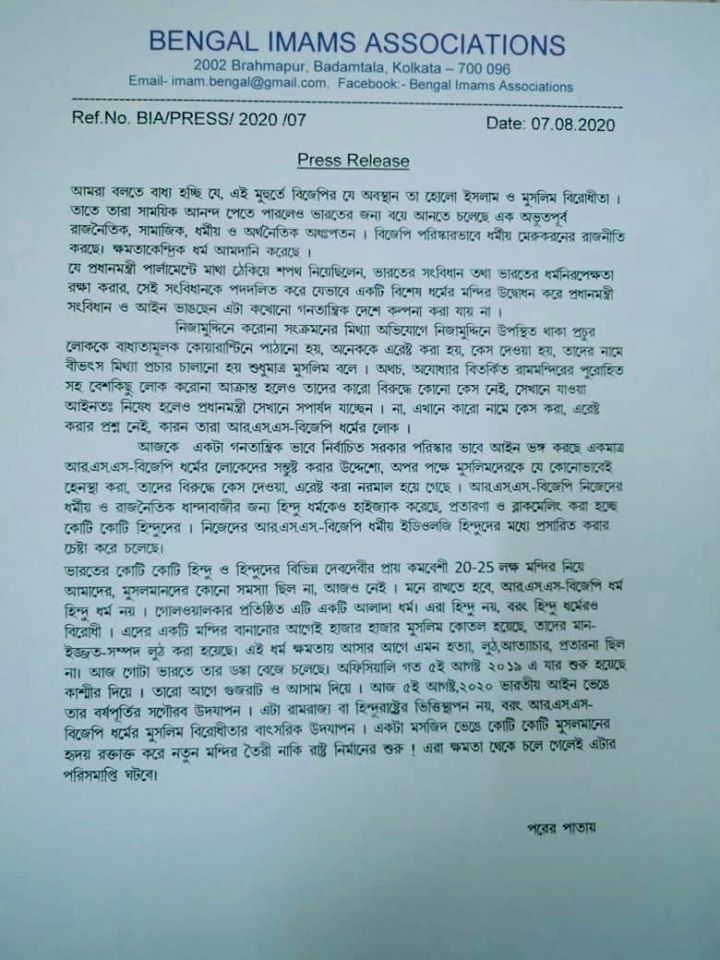 Mentioning the Tablighi Jamaat incident of Nizamuddin Markaz, the association claims that attendees of the congregation were detained and quarantined ‘illegally’. They were booked under ‘false cases’. The statement read that the Jamaatis were falsely targeted for being Muslims. Comparing the Nizamuddin situation with the Bhoomi Pujan, the statement issued by the Bengal Imams Association claimed that many attendees of the Bhoomi Pujan, including the priest had tested COVID-19 positive, but no cases were registered against them.

Here, we would like to clarify that ahead of the Bhoomi Pujan, the head priest Acharya Satyendra Das was quarantined as his assistant Pradeep Das had tested positive for Covid-19.  They neither concealed the condition nor violated any health advisories.

‘As one of my assistants, Pradeep Das, tested Covid positive on July 30, the trust has asked me not to enter Ram temple premises for three days. I will not be performing ‘bhumi pujan’ as other priests have been engaged for that ceremony,’ said Acharya Satyendra Das.

Accusing the BJP and the RSS of employing religion-based tactics in their politics, the Bengal Imams Association stated that Muslims have never objected to the lakhs of temples dedicated to Hindu deities across Bharat. But, the statement proclaimed, ‘thousands of Muslims have been killed, looted and raped’ for the under-construction Ram Mandir at Ayodhya.

The statement also brought up the topic of abrogation of Article 35A and 370 in Jammu and Kashmir that was announced on August 5th, 2019, to make a case that the reigning government was ‘harassing Muslims’. They made mention of Gujarat and Assam to allege that the BJP has been ‘torturing the minorities’ in these two states. Alleging that the Ram Mandir is being made after ‘massacring uncountable Muslims’, the Bengal Imams Association declared that this would end when the BJP goes out of power.

Much like the open threats of the All India Muslim Personal Law Board, the Bengal Imams Association also issued an indication of destroying the Ram Mandir once the BJP goes out of power. The statement reached its crux with an open threat to any and every Muslim who is associated with or supports the RSS or the BJP. Such individuals, according to the statement, will no longer be considered Muslim as they are supporting the ‘anti-Muslim forces’, and they will have to deal with dire consequences.

The open letter signed by Mohammad Yahya, the Chairman of the Bengal Imams Association, declares that as per Hadees (Islamic holy scripture), individuals linked with the above-mentioned organizations, along with their families, will not be considered Muslims.

This is not the first time that Muslims who dare to support BJP as the better governance alternative are threatened by Muslim clerics and other Islamists. In 2018, many Muslim families in a Tripura village were boycotted by their village mosque for joining BJP. Recently, we had seen how ex-footballer Mehtab Hossain left the BJP within 24 hours of being inducted, in the face of severe pressure and condemnation from his community. Free will and freedom of choice is an illusion for Muslims of Bharat – that is how radicalized our Muslim polity is, all thanks to secularism.

It is understood that the open letter was issued to influence the upcoming state elections. After the 2019 General Elections, chances of the BJP gaining power in the state have increased. The BJP secured 18 Lok Sabha seats from West Bengal in 2019. It is believed that a rattled TMC might have leaned on the Imams Association to issue such statements to ensure the Muslim votebank does not stray.

However, BJP is moving ahead unperturbed. After the Bhoomi Pujan the prasadam of the Ram Mandir has been handed over to BJP leader and Matua Sangha President, Shantanu Thakur at the headquarters of the VHP in Delhi, after the soil and water of Matua Mahasangh was used in the Bhoomi Pujan.

Alok Kumar handed over the PRASADAM of the Ram Mandir to @Shantanu_bjp;Matua Sanghadhipati,at the headquarters of the VHP in Delhi. ATST,he said that the soil and water of Matua Mahasangha,has been used in BHOOMIPUJAN with utmost respect.https://t.co/4i118AaKUk

But this is yet another example of how calmly Muslim and Christian religious bodies issue brazen political calls to their flock while asking others to heed secularism! In the case of Muslim bodies, threatening majority Hindus and Constitutional bodies and stirring up hatred based on false narratives comes naturally. If these are the sort of public statements they issue, one can only wonder what sort of sermons the imams deliver behind closed doors every Friday.