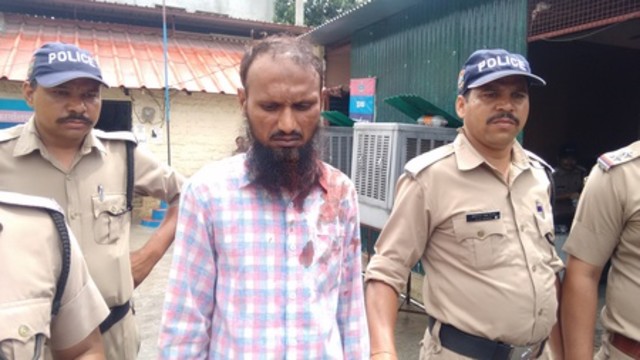 Alert villagers and Bajrang Dal workers managed to save a minor girl who was being kidnapped by a Government school teacher in Kamaluaganja near Haldwani town, Uttarakhand.

The news has been reported in Hindustan paper –

“As per police, the 9th standard girl student who resides in Kaladhungi police station area had left for school in the morning with her brother by bike. As the bike developed some problem on the way, the girl started walking to school. After some distance, one Mobin Khan accosted her on the pretext of dropping her to school and then forced her to sit in the car and started driving fast towards Haldwani city. Khan is a teacher at Government Madhyamik (secondary) school in Dhauna Okhalkanda and resides at Kaladhungi Ward No. 2.

When people heard the girl shouting from within the car, they quickly phoned some people in Kamaluaganja (where the car was headed). Bajrang Dal workers Neeraj Bisht, Yugal Shah, Gaurav Bisht, Bhaskar Kiraula, Mahendra Nigalatiya and a few villagers gathered and started waiting for the car at Kamaluaganja junction. They managed to stop Mobin Khan’s car by blocking the road with tractors.

Upon questioning Khan said that he was taking the girl to buy school books, but the girl said that he had kidnapped her by force. The villagers then became agitated and beat up the accused before handing him over to police. Mukhani police station in-charge Kamal Hasan said that the accused Mobin Khan has been charged with POCSO (Protection of Children from Sexual Offenses), kidnapping and other acts. He was presented in court, from where he was sent to jail.” 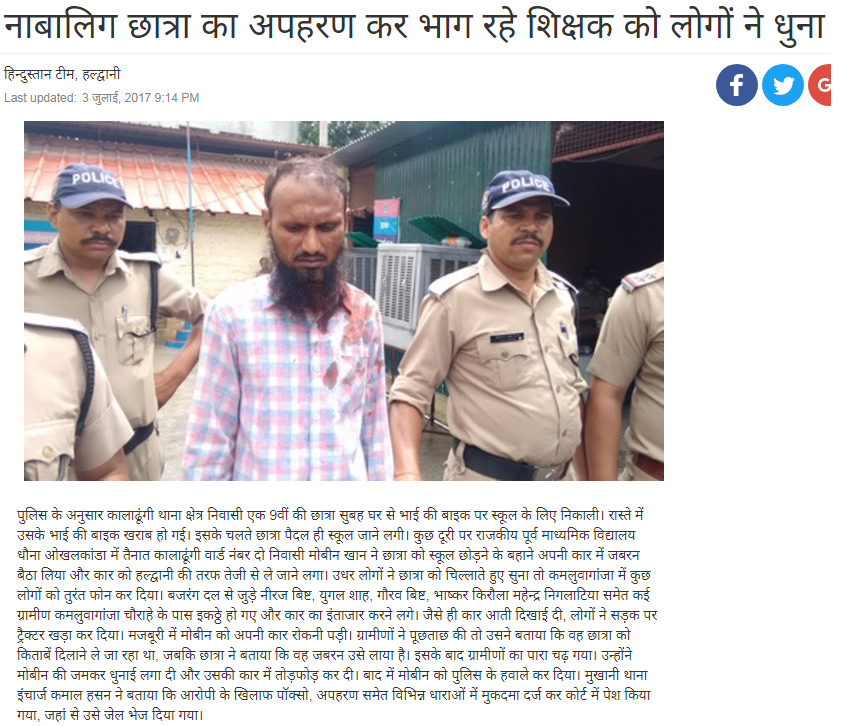 Such incidents are a routine occurrence in the hinterland of Bharat. The same Bajrang Dal which yuppie urban Hindus consider loathsome, is often the fist line of defense for ordinary Hindus.

A crime comes to national limelight when those who control the public narrative deem it worthy of outrage. In this case, if the accused Mobin Khan had died when he was being roughed up by the villagers, one can rest assured that his name would have been added to the list of #NotInMyName martyrs, and the trauma undergone by the minor girl that Khan had abducted would have been all but forgotten. The issue would have been kept alive with multiple reports across the English MSM, the girl’s character might have been besmirched, and all sorts of ‘investigative’ reports would have been filed to show how Mobin Khan was a hard-working, Allah-fearing teacher who was trapped in some conspiracy by blood-thirsty Hindutva mobs.

(We would like to thank Pawan Gautam‏ – @shaakt_9, who brought this news item to our attention)