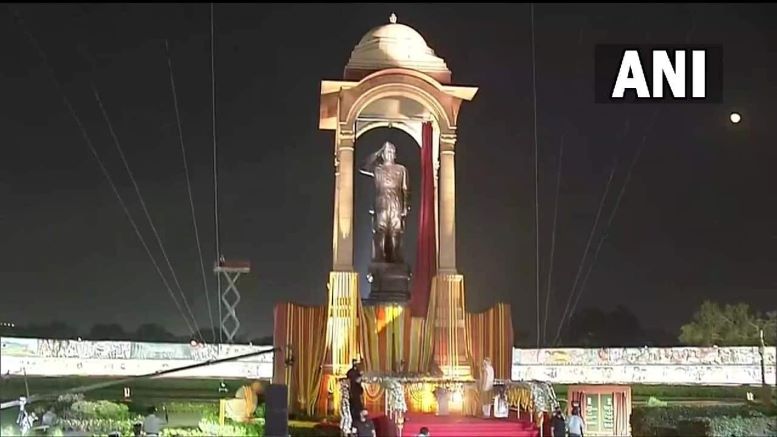 Yesterday’s unveiling of Netaji Subhas Chandra Bose’s statue at India Gate has fulfilled the long-cherished dream of many activists across the country, like Devdutta Majhi, members of Mission Netaji and several others. This long overdue recognition of Netaji Subhas Chandra Bose, arguably the greatest freedom fighter in Bharat’s history, is being seen as a major step in the ongoing decolonization of the country.

It was Netaji’s Indian National Army (INA) which gave a bloody nose to the British, and inspired the 1946 Naval Uprising which finally signaled to the brutal European colonizers that their time was up.

Several online petitions seeking the installation of Netaji’s statue at India Gate, such as this one started by social activist Devdutta Maji around 2 years back which garnered close to 1 lakh supporters, had been building up public momentum.

People had long been demanding that Netaji’s statue be installed at the empty canopy behind India Gate. Shockingly, British King George V statue’s had remained at the canopy till 1968, a full 2 decades after independence! It was only when agitated citizens threw stones at it, breaking its nose and ears, and placed Netaji’s pictures there, that the George V statue was finally removed. But the canopy remained empty for another 54 years, till it finally became the site for one of the most deserving sons of Maa Bharti.

Netaji Subhash Chandra Bose’s stirring call to arms, “Give me blood and I will give you freedom” still gives goosebumps to every patriotic Bharatiya.

Just like it is people power that ensured Netaji was finally given his due recognition by a hitherto ungrateful nation, we need to keep battling to completely erase the colonial vestiges, mindsets and institutions that continue to shackle us.

Unveiling of Netaji Bose statue at Kartavya path, Delhi is another welcome step towards decolonisation