RSS Workers And Children Attacked in UP 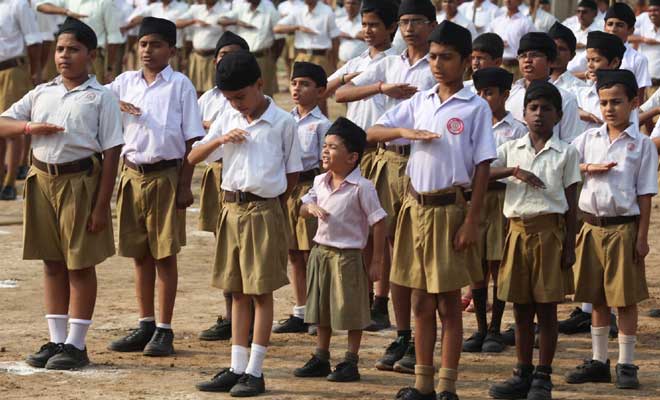 There has been a spurt in attacks on Hindu activists associated with Rashtriya Swayamsevak Sangh (RSS) in the last few months. After the series of attacks on RSS workers in Kerala, Karnataka and firing on an RSS office in Ludhiana, Punjab, news has come in of 2 attacks over the weekend on RSS workers in West UP.

The first attack took place near Allahabad, UP. As this news report –

“Police have registered a case against 12 people for attacking a Rashtriya Swayamsevak Sangh (RSS) activist, following a dispute over a ‘shakha’ (daily gathering) being run at a primary school in Baka Jalapur village, near Allahabad, UP.

Members of the Muslim and Hindu communities clashed soon after the attack, which occurred on Saturday evening. A large number of police personnel were deployed in the area to prevent any untoward incidents.

The police report stated that Sandeep Kumar, a resident of Bhiknapur Alawalpur village in Mauaima, had an altercation with one Afsaar Ali over the former running an RSS shakha at the Ghoorghat primary school in the village.  Kumar was attacked by Ali and a few of his friends at the primary school on Saturday, and shot at upon trying to flee the scene. However, the RSS activist managed to enter a village, where the villagers came out to support him.

Upon being informed about the communal tension in the area, superintendent of police (Trans-Yamuna) Rajesh Srivastava rushed to the village with a large number of security personnel. A case was registered against Ali and his accomplices after Kumar filed a complaint.

The accused – for their part – have claimed that it was Kumar and his supporters who attacked them, although they were yet to approach the police in this regard. Mauaima circle officer Lal Pratap Singh said that a case has been registered against the accused, and raids were on to nab them.”

Over dozen children attending RSS Shakha in Noida beat up

As per a report from Dainik Jagran paper, over a dozen children studying in Class 5 or 6, who were attending an RSS shakha in Sector 9 Noida, were attacked with lathis (batons) by a group of Muslim youth (including few adults). The young children were thrashed and made to flee, and the RSS flag was pulled down. RSS has registered a complaint with Noida police station.