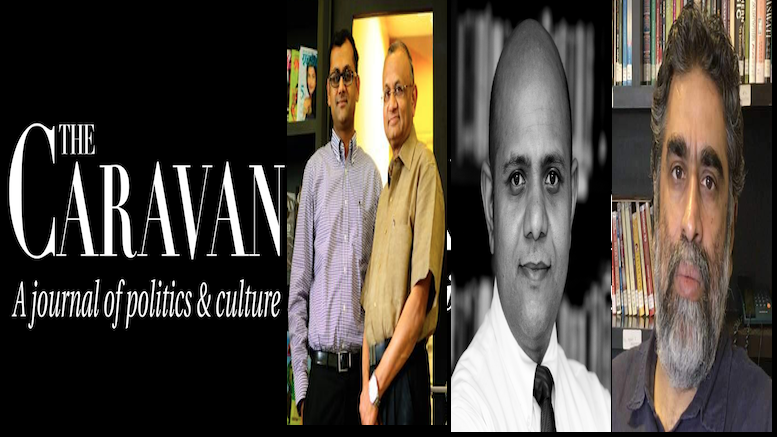 The Caravan magazine is arguably the most virulent anti-Hindu media outlets in contemporary times, which takes some doing looking at the long line of competitors it has in this space like Scroll, The Wire, News Laundry, The Print, Quint, Indian Express, The Hindu etc.

The Caravan was at the forefront of the PIL campaign to convert the natural death of Judge BH Loya into a murder conspiracy hatched by BJP leader Amit Shah. The left-liberal lobby went to such extreme lengths that even a liberal SC judge like Justice Chandrachud was driven to exasperatedly remark, “a magazine and a daily newspaper published motivated reports to malign judiciary,” while dismissing the PIL filed in the case.

A short twitter thread by @MycoJonathan sheds more light on this propaganda magazine, its ideology and key players. The same is reproduced below:

With anti-Hindu liberals like Shashi Tharoor and all the other anti-Hindu Dharma, pro Islamists/ pro-Congress party/ pro-Naxal/ pro-Christianity people regularly using The Caravan as a source, we need to understand what The Caravan represents in their long form opinion pieces about Bharat.

The Caravan is part of the Red/ Green axis that plagues all left governments of the world today. Those writing for and supporting their work support the destruction of our governments for Communism or Islam.

Islamists and Marxists are ideologically at odds. Marxists wanting communism, Islamists wanting Islamo-fascism, but they use each other for what they see as a common enemy in Bharat. Hindu Dharma, the pluralism and egalitarian society are represented by Dharmic culture.

The Caravan is part of the long standing anti-Hindu Dharma industry that was re-invigorated with the election of Prime Minister Modi. This industry is supported by the Christian based west and leftist liberal governments supporting them and all Islamic Nations of the world and their supporters.

The Caravan itself was revived just for the purposes of attacking Hindu/ Dharmic society and anyone reading their pages can easily see their true agenda. Other new entrants in this anti-Hindu Dharma industry are Omidyar funded Scroll & The Wire to name a few.

We know International names like Omidyar & Soros, liberal billionaires who fund anti-Hindu agenda and narrative. They use their money to establish a well-funded network to drive international narrative against Hindu Dharma. We also know the numerous Islamic organizations who do the same.

For Hindus, it’s important to know the local Indians driving anti-Hindu narrative. Names like Paresh Nath and his son Ananth, who through their publishing group Delhi Press have some 30 magazines targeting all levels of Bharatiya society from children to adults. The editorial staff at The Caravan includes Vinod K Jose, a pro Islamist voice and Hartosh Singh Bal who also writes anti-Hindu propaganda for the NYT. Get to know the anti-Hindu staff & editors at The Caravan.

I first saw The Caravan in the US elections where, along with Omidyar’s media outlets, they attacked Tulsi Gabbard with Sikh separatists/ Pakistan propaganda which Democrat Ro Khanna shared and called important. In Bharat and globally, this anti-Hindu industry attacks anything involving Hindu Dharma.

In the United States, as it is in most of the world including Bharat, this anti-Hindu/ anti-Hindu Dharma propaganda is spread by the left. Democrats and their media spread propaganda against Bharat/ Hindus/ Modi and because of her Hindu faith, against Tulsi Gabbard.

You see it clearly in Democrat politicians like Khanna, Omar, Tlaib, Jayapal, AOC (Alexandria Ocasio-Cortez) and others. The Democratic Party, just as the Congress Party in Bharat, is fully part of the Red/ Green Axis. For this reason, I advise no Hindu Americans to support Democrats. They are against you. They should remain vigilant.

One should always check sources, see who funds media, research owners and authors political and religious ideology. Use social media wisely as it is the best counter to propaganda. Stand strong for truth and Dharma and do not let them continue their anti-Hindu Dharma narrative. Speak out!

(This article has been compiled from the tweet thread of @MycoJonathan)