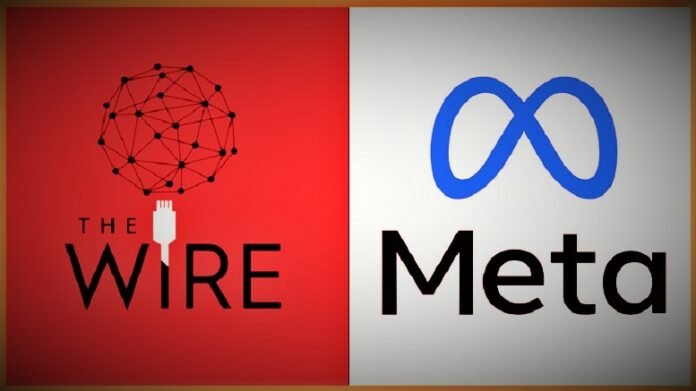 The Wire has withdrawn all its stories alleging that BJP’s IT cell chief Amit Malviya had special powers to block content on Instagram. The portal has said it would set up an internal committee to investigate the matter. The announcement comes close on the heels of Facebook and Instagram’s parent company Meta slamming The Wire for fabricating the anti-BJP story.

OpIndia reported in detail how The Wire attempted a face-saver by assuring to ‘conduct a thorough internal investigation’ after its fake story was exposed at different levels. “In light of the concerns and doubts raised about our coverage of Meta, we are setting up an internal review of all documents, information, source material and sources used for these stories”, a statement issued by the leftist propaganda portal said.

“The leftist propaganda website has pulled down all the reports related to the Meta controversy as domain experts and independent researchers have refuted its claims and amidst reports that the organisation may have relied on forged documents to level the allegations it had made against Meta”, noted OpIndia.

Kanishk Karan, one of the independent researchers listed as an expert by The Wire to verify its story on DMIK verification, took to Twitter to confirm that he didn’t verify the leftist propaganda site’s report on FB ‘XCheck’ as claimed by the portal.

Similarly, another independent expert currently employed with Microsoft Asia and based out of Singapore, Ujjwal Kumar, denied having verified DKIM for the portal. “Facebook uses Microsoft email services and if Ujjwal Kumar had indeed verified the emails for The Wire, it likely breached the client-confidentiality clause by abusing his privilege”, highlighted OpIndia.

The Wire’s founding editor Siddharth Varadarajan had said that Ujjwal Kumar had also ‘verified’ their proofs. But tech expert Pranesh Prakash stated that he reached out to both the independent experts who denied having verified DKIM for The Wire.

Newslaundry‘s Executive Editor Manisha Pande stated that it received a response from Microsoft and tweeted Microsoft’s response saying, “Over the weekend, an Indian publication erroneously attributed commentary to a colleague. They have been informed of their error and a correction has been requested”.

In view of the leftist propaganda site withdrawing its stories, it must also be pointed out that the reporter Devesh Kumar, who made the unsubstantiated allegations against Amit Malviya, temporarily deactivated his account raising several questions. The latest denial by independent researcher Kanishk has only shredded to pieces the story aggressively pushed by The Wire when evidence suggested otherwise.

OpIndia says, “with the unravelling of The Wire’s spurious claims about Meta and with the disappearance act of its reporter Devesh Kumar from Twitter, questions are being raised about the credibility of the leftist rag’s Tek Fog fiction, given that the same Devesh Kumar had co-written those reports too”.

In a report published by The Wire on October 10, it claimed “Bharatiya Janata Party’s IT Cell Chief Amit Malviya has such power in Meta, the parent company of Facebook and Instagram, that if he reports any post on the platform, it gets removed by the system, no questions asked”. It also claimed that even if the publisher of the post that was removed from Instagram appeals against the removal, it does not get accepted by the system as Malviya has the privilege of being on the XCheck list.

XCheck is a ‘Meta Program’ believed to provide special privileges to high-profile users like actors, politicians, and other influential personalities on the social media platforms under Meta. However, many independent researchers and domain experts had punctured the wild allegations made by The Wire while highlighting that the allegations made by the propaganda portal didn’t add up.

In July 2017, HinduPost had done an analysis detailing the backers and funders of Hinduphobic and anti-Bharat The Wire. It was founded in 2015 by editors Siddharth Varadarajan, Sidharth Bhatia, and MK Venu and is published by the Foundation for Independent Journalism (FIJ), a non-profit company.

In our analysis of 24 Bharat-specific articles which had appeared on The Wire on 26 & 27 July, only 6 were neutral. Other standouts of The Wire‘s coverage – near total lack of positive or balanced reporting of any act by the Modi Government, silence over Mamta Banerjee’s pandering to her Islamist vote bank (on the contrary articles blame BJP for ‘communalizing’ the state), air-brushing CPM’s violent tactics to silence political opposition in Kerala (one article terms it as ‘Majoritarian Violence’ and absolves communist ideology chillingly stated by CM Pinari Vijayan), equivocation of the ethnic cleansing of Kashmiri Pandits with the civilian deaths in J&K during the 27-year battle against terrorism.

It is reported that the 3 founders initially put in about Rs. 2 lakh each in the venture. Subsequently, FIJ applied for a grant from the Independent and Public Spirited Media Foundation (ipsmf.org), a public charitable trust registered on July 1, 2015, in Bengaluru. FIJ received Rs 1.95 crore from IPSMF as a grant commencing August 2016. The second tranche of Rs 1.75 crore was received in March 2017, bringing the total funding from the IPSMF to Rs 3.7 crore.

“The Wire which is actually pushing for a rollback to the disastrous Nehru/Indira/Sonia era of a statist, socialist, entitlement economy?”, HinduPost had highlighted back then. The leftist propaganda site hasn’t changed and continues to peddle its agenda even if it means peddling fake stories such as the one on Meta.