The importance of two-way communication in a democracy 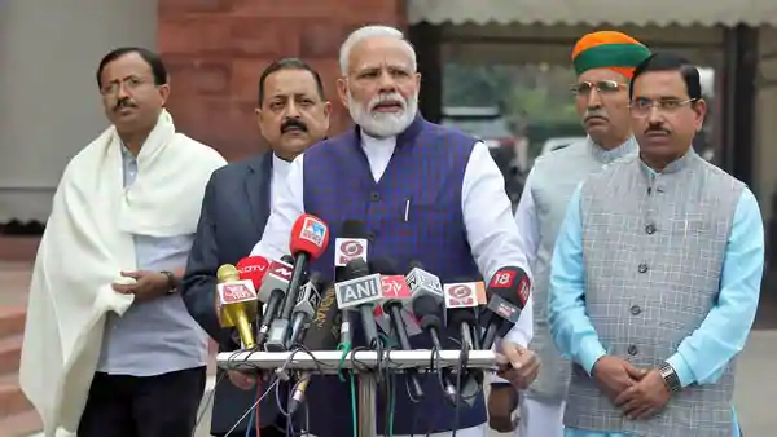 Compared to the US, press briefings by Bharatiya PMs with the press are not as frequent or regular, but still, our PMs have been known to have addressed two-way press conferences periodically. During the UPA regime, this practise was virtually put to a halt and Manmohan Singh is said to have held all of three pressers in his 10-year tenure as the PM. Even these were with a select team of crony journalists and half-heartedly done.

In the UPA decade, Bharat’s MSM played a crucial role in separating the elected government from accountability and answerability. Mal-governance was given a free pass. Scams went unreported and even when bits and pieces of information entered the public domain, the MSM of the day did not seek accountability.

The Radia tapes only confirmed what citizens had suspected all along—that the MSM had become lapdogs instead of watchdogs. By refusing to investigate scams and putting the government outside the framework of accountability, the MSM in a way played the role of an accomplice in the UPA mega scams.

Neither Sonia Gandhi nor PM Manmohan Singh held press briefings except the three press interactions of MMS with selected pro-Congress journalists. Press interviews were also very rare and if at all they were given, known 10 JP minions like Rajdeep were selected and the interviews ended up being PR exercises with no tough or relevant questions asked.

This arrangement with MSM helped insulate the UPA regime, perhaps even partially contributed to its return to power for a second term in 2009. But insulating a government in this manner in a democracy is a two-way street which tends to make the ruling dispensation arrogant and unaware of the turning tide against it. UPA clearly had no clue about what was coming when in May 2014, the electorate gave the UPA a much needed jolt by throwing it out and giving a clear majority to the NDA.

Electoral consequences of this arrangement apart, the relevant question is whether it set a precedent for the power centres in the government to be above answerability and accountability. The norm set during UPA rule continues during the Modi sarkar and the PM has not held any independent press briefing in Bharat in the last 7 years. Is it sufficient for the PM to carry out one-way communication carried out through Mann ki Baat, speeches at election rallies and at organized events?

The answer is that although there has been a history of journalists being anti-Modi since 2002 but if one assumes that journalists are not Modi detractors, democracy would gain and be strengthened by the PM’s accessibility and articulation on issues.

Benefits of two-way communication by top leaders in a democracy

Accountability: It is healthy for a democracy where the top leaders including the PM are accountable, approachable, and answerable.

Party gets to speak in one voice: Large democratic parties have a greater risk of not sounding like one cohesive unit when different leaders from the same party express different views. In the BJP, the grassroots leaders are more candid about how they wish to take on fake secularism but higher ups in the party do not articulate on these issues at all.

Transparency: Two-way communication improves transparency about the party’s priorities and the intended path to be taken. Citizens including the support base of the Modi Sarkar have often remained in the dark about which issues are going to be prioritized if at all.

Narrative Building: Two-way communication helps in setting the narrative. For most of the 75 years of Independence, the Left has managed to control thought and institutions including educational ones. Our text books from school to University level have fake and distorted information on Hindu Dharma and history; our film industry is ruled by fake secular propaganda; our bureaucrats who receive Left driven propaganda as education are also part of the system. In general, our country has been guided by Nehruvian thought.

The core support base of the BJP along with most BJP members and leaders reject Nehruvian thought and seek a different narrative that has Dharmik groundings. Narrative redefinition predominantly starts from the top. This is one more reason why the top leaders must articulate on these issues and what better forum than an interactive press-conference where questions are taken?

Even today, BJP supporters wonder why a party that won on the plank of “no appeasement” refuses to scrap the RTE or remove its minority clause that puts Hindu-run schools at a disadvantage, having to abide by the RTE norms while minority schools don’t have to. How can RTE–as it stands today, be in keeping with “no appeasement” which BJP claims to be its principle?

Two-way communication would help clarify the top leadership’s views on these issues and correct distorted narratives. Displacing Nehruvian narrative cannot be tackled with radio silence from the top.

BJP’s very genesis is based on opposing pseudo-secularism hence it needs to clarify its stand on policies that discriminate against Hindus such as RTE, temple control, and Articles 12, 15, 19, and 25 to 30. The BJP government has a majority on its own and is in a position to clarify its stand unlike when having to follow “coalition Dharma.”