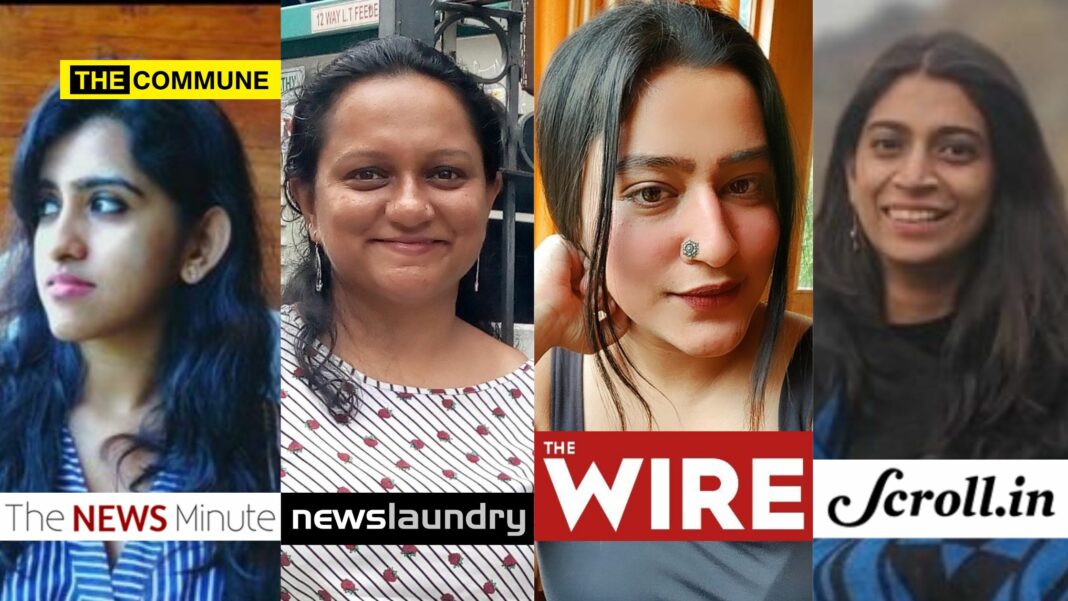 The Indian American Muslim Council (IAMC), which claims to be the “largest advocacy organization of Indian Muslims in the US” has named a few Indian journalists and media outlets as prize money winners of its annual Human Rights and Religious Freedom Journalism (HRRF) Awards.

On its official website, the organization has announced prize money worth ₹3 lakh to the winners of the awards.

The ‘journalists’ chosen by IAMC includes: Akanksha Kumar of Newslaundry, Priyanka Thirumurthy of The News Minute, Shahid Tantray of The Caravan Magazine; Ismat Ara of The Wire, Aishwarya S Iyer of Scroll.in and Syed Shahriyar of The New Issue Magazine – UK.

Besides the above-mentioned journalists, an online news portal named ‘Mooknayak’ and Article 14 have also been listed as prize money winners.

“Extraordinary and in-depth reporting covering the targeting of religious minorities under the anti-conversion laws, persecution of Muslims during COVID-19, and human rights violations in Kashmir were among the stories that earned top honors at the virtual award ceremony held on Sunday, June 19.”, the press release by IAMC read.

Receiving foreign contribution/hospitality by media correspondents/columnists, cartoonists, editors, and owner of media houses is prohibited as per the Foreign Contribution Regulation Act, 2010.

Section 3(1) of the Act clearly states that no foreign contribution shall be accepted by any individual (correspondent, columnist, cartoonist, editor, owner), company or association engaged in the production or broadcast of audio news or audiovisual news or current affairs programs through any electronic mode, or any other electronic form.

The IAMC is a problematic organization with links to Pakistan-based terror groups. It is known for peddling anti-Bharat propaganda at the international arena and also lobbies with US leaders and bodies against Bharatiya interests.

The IAMC had reportedly collected funds for the cause of Rohingya Muslims and used it to pay Fidelis Government Relations (FGR), a US-based lobby firm for getting Bharat blacklisted by the United States Commission on International Religious Freedom (USCIRF).

Mr. Terry Allen, Chief of Staff for FGR was a long-time associate of Nadine Maenza, Chair of the USCIRF. IAMC’s Sheikh Ubaid is friends with Abdul Malik Mujahid, who headed the Islamic Circle of North America, the US front for Jamaat-e-Islami, Pakistan. The ICNA also has links with Pakistan-based terror groups including Lashkar-E-Taiba(LeT).

Earlier on 27 January 2022, Union Minister of Minority Affairs Mukhtar Abbas Naqvi said that IAMC has links with banned Islamist organization Student Islamic Movement of India (SIMI) and Pakistan’s Inter-Services Intelligence (ISI). He had also stated that the IAMC is trying to propagate anti-Bharat bashing at the international level.

In November 2021, over 100 social media account holders including the official account of IAMC were booked under the Unlawful Activities (Prevention) Act (UAPA) for sharing fake photos and videos of a mosque allegedly burning in Tripura on social media. The Ministry of Home Affairs (MHA) had deemed the news of violence in Tripura as fake. They also said that there was “no report of simple or grievous injury or rape or death of any person in these incidents in Tripura as alleged in some social media posts”.

In light of this, a complaint has been filed by the Legal Rights Protection Forum with the MHA to look into the matter of foreign funding of Indian journalists and media houses through prize-money by IAMC.

Urged @HMOIndia to initiate detailed investigation and immediate action under provisions of FCRA, PMLA & UAPA Acts in the matter of foreign funding through Prize-Money to Indian journalists&Media houses by @IAMCouncil which is having links with Pakistan-based terror outfits (1/2) pic.twitter.com/nRmJYXHZKj

Speaking to The Commune, the Working President of LRPF A.S. Santosh said “If this attempt to influence Indian journalists through prize money is not stopped, it will become a precedent to announce higher and higher prize money in the coming days. This will be used as a loophole to circumvent the provisions of the FCRA Act which clearly restrict Indian media houses and journalists from accepting any foreign contributions.”

(This article first appeared on The Commune on June 22, 2022 and is being republished here with permission)