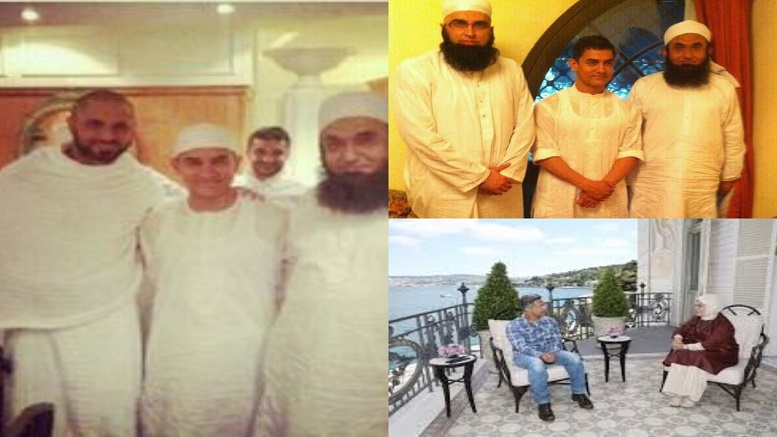 Aamir Khan has recently been in news for his visit to Turkey. He met the wife of President Erdogan in Turkey and remarked how his wife, Kiran Rao, really loved it there and liked mixing with people of Turkey. This comes at a time when Turkey has forcibly converted the Hagia Sophia into a mosque, is actively suppressing and killing Kurds and more importantly has formed common cause with Pakistan against Bharat on multiple issues.

These events have led to a lot of commentary on social media as well as mainstream media about the actions and motives of Aamir Khan. In this article we go deeper and try to understand his preferences and how these have affected his work in cinema.

Aamir Khan has tried to portray himself as a secular and apolitical person. The reality is a bit different. Twitter user @TheHinduYoddha did a thread on Aamir Khan that is given below:-

Thread- Know Your Aamit Khan [Part-1]
In an interview with Shekhar Gupta in 2005,Aamir khan accused PM Narendra Modi for killings of thousands of people in Gujrat riots who was CM of Gujrat then and made him and BJP responsible for Gujrat riots. pic.twitter.com/6BILsEEH8Q

In the thread, you can see a video of Aamir Khan blaming Modi and BJP for 2002 riots. This was in 2005, when UPA was in power and the matter was sub-judice. Of course, the courts later gave a clean chit to Mr. Modi in the case. It is also to be noted that since then Aamir Khan has not condemned any other riot with the same fervor. Probably, because BJP ruled states did not actually have riots and he did not want to criticize ‘secular’ parties like Congress or Samajwadi party.

During the 2014 elections, he appealed for a fractured mandate and coalition government. This was at a time when BJP was emphasizing on a  decisive mandate. Aamir Khan batted for a coalition govt despite the massive corruption during UPA 1 and 2 which was in media, day in and day out. Everyone knew that in case of a fractured mandate, Congress would be the natural preference of regional parties and that meant a return of UPA corruption. Aamir did openly take a political position there, but it went unnoticed.

All of us are aware of the time in 2015 when Aamir Khan’s wife was scared in Bharat and wanted to move out of Bharat. This was in the aftermath of ‘lynching’, ‘intolerance’ and award wapsi episodes. It must be noted that at that time, Aamir Khan’s movie PK had recently broken all records of earning money in Bharat. Curiously, in the same address, he also said that Islam does not have anything to do with ISIS and terrorism. Around that time the radical Islamic terrorist group had killed 127 people in Paris attack of 2015 and his comments were in this context. But this episode led to a lot of questions.

Why did Aamir, whose movie had recently earned hundreds of crores in Bharat, suddenly feel so insecure and unloved in Bharat?Why did he not return his own Padma Shri and Padma Bhushan, if he was so concerned and supported the award wapsi? In light of ISIS attacks, would Aamir say that Paris is a safer city than Mumbai and worth moving to? Or is Islamic intolerance not scary for him?

As his wife found Bharat scary and now finds Turkey a lovely country with wonderful people, if and when is the couple planning to shift to Turkey?

The man, as known by the company he keeps

Aamir Khan has cultivated the image of the ‘thoughtful’ public voice, a perfectionist and someone who stays away from Bollywood gossip. Even during the recent Sushant Singh Rajput & Bollywood-Pakistan-nexus controversies, his name was largely absent while that of Salman, Shahrukh and their associates were hauled over coals. This was despite him having a strong family background in Bollywood.

However, it is not as simple as it looks. Aamir Khan has frequently hobnobbed with people who follow a certain ideology and has endorsed their positions publicly in many cases.

He endorsed urban-naxal Medha Patkar and her opposition to the construction of dams on Narmada in 2006. It is to be noted that all displaced in the process were rehabilitated and the project is now a lifeline to water scarce regions of Gujarat. At that time, even Congress leaders of Gujarat opposed his stance, but he refused to back down. It is curious to note that he continued endorsing Coca Cola for years afterwards. The Coca Cola Company has been responsible for water pollution and water shortages at multiple places in Bharat and all over the world. Clearly, his activism is strictly divorced from his commercial interests.

He has been quite close to Pakistani Maulana Tariq Jamil and Junaid Jamshed, the musician turned Islamist preacher of Tablighi Jamaat in Pakistan. He reportedly spent hours listening to Tariq Jamil while he was on Haj in Mecca and Medina and frequently requested his blessings for his movies. Tariq Jamil has recently blamed scantily dressed women for COVID crisis. Jamil has publicly denigrated Hindu Dharma during his speeches many times. He talks of ‘spreading love’ and then in the same breath, calls Hindu Dharma a false religion! However, showing similar ‘love’ to Islam in Pakistan, or for that matter in Bharat, can lead to one being swiftly decapitated! Aamir Khan, being a follower of this Maulana of Tabhligi Jamaat, should clarify whether he believes in his ideology.

His recent hobnobbing with Erdogan’s family in Turkey also raises many questions. The current President of Turkey, Mr. Erdogan and his party has led to Islamization of Turkey and undermined secularism in Turkey.  He has openly supported the Islamist group Muslim Brotherhood and there are reports that he is radicalising young Indian Muslims by using surrendered ISIS cadres! According to reports, the Turkish Embassy in Bharat is partnering with various NGOs to send students to Turkey, where they are being brainwashed to join the Turkish-Pakistani cause. He has already taken the line of Pakistan in case of Kashmir and CAA-NRC protests and is thus trying to interfere in domestic matters of Bharat. He has brutalized Kurds in a sustained military campaign in Syria, has consistently denied the Armenian Genocide and recently started converting Churches into Mosques. All these facts are in public domain and media has covered these extensively. In light of this, Aamir’s meeting the Erdogan family and praising Turkey tells us a lot about his hypocrisy. It is also worth noting that Aamir had declined the invitation to meet the Israeli Prime Minister when he was in Bharat.

Aamir Khan’s ideology can also be seen in his cinema. Take the example of the movie PK. This film denigrates Hindu Dharma and its holy figures in many ways and portrays praying to them as similar to dialling a ‘wrong number’. It also romanticizes the relationship of Hindu girls with Muslim men, without touching upon the pitfalls and asymmetry seen in such relationships in real life. Of course, Aamir Khan’s own life is an example of this too. Both his ex and current wife are Hindus, but he reportedly made it very clear (to his wives) that their children will always follow only Islamic religion.

He also started a TV show called Satyamev Jayate to highlight problems of Bhartiya society. Curiously, in the show spanning 3 seasons, there was not a single episode that discussed issues such as triple talaq, nikah halala, female genital mutilation, sexual exploitation in madarsas, nikah mutah, grooming of non-Muslim girls, or even purdah. This leads one to suspect that it was another effort at showing Hindu Dharma in poor light while evading the ills plaguing Muslim society.

Aamir Khan is known to exercise huge influence on the story and production of the movies he acts in. Thus, all this cannot be said to be somebody else’s idea. The evidence indicates that Aamir Khan follows an ideology which is pro-Islam, anti-Hindu and anti-Bharat.

Bharat’s people have showered Aamir Khan with adulation and wealth. His own status in film industry is a testimony to tolerance of Hindus. It is surprising that he not only openly expresses his dislike for Bharat, but also shows preference for a country that has been mired in anti-Bharat activities and is a religious supremacist state which supports terror.

The truth of Aamir Khan as a closet Islamist needs to be told to each and every one of his admirers. Not doing this will be a disservice to Dharma and country. Satyamev Jayate!