The day after the Amarnath Yatri Massacre, all of our media channels drummed the beat of “all of Kashmir condemns” the massacre.  Some went so far as to say that this would lead to the backlash against Jihadi terror that would pull Kashmir out of the Islamist/Jihadist/Separatist cesspool that it is in.

However, as noted in an earlier article, the facts on the ground did not seem to add up to this assertion by our media pundits. For one, there was no call for bandh in the Kashmir valley.  Second, no major protest footage was forthcoming from the media.

So what did our media base their assertion upon?  Some pundits used vague statements like “all Kashmiris I know have condemned the attack” etc.  But what are the facts on the ground?  Did any protest happen on the ground in Srinagar?  What did it look like?

Here are the facts on the ground.  I found footage of one such “protest” on the channel that was drumming the beat of “Kashmiris protest” rather loudly.  I took shots from their own video for the readers to see the kind of “protest” that happened in Srinagar.

The footage of the protest starts at 0.35 in the video, available here.

The channel loudly proclaims that

“From Srinagar to Delhi, citizens came out in solidarity with families of the Amarnath Yatra pilgrims killed in a terrorist attack in Jammu and Kashmir.”

First of all, the “protest” saw no more than a few ten (maybe 20 or so) protesters.  And what were they protesting? Look at the banner carried by the gentleman in the photo above – it says “from Gaw Kadal to Botengo Massacre, United Nations must investigate.” Gaw Kadal is an incident where 22 people died after security forces opened fire to control a violent mob that was defying curfew on 21 Jan 1990. Botengo (Batengoo) is the place in South Kashmir where the Amarnath Yatris were attacked. So this person is basically saying that Amarnath Yatri massacre might also have been committed by Bharat, and that the UN should investigate this.

Next another gentleman is protesting against alleged human rights violations in Kashmir (by security forces). The banner he is holding says ‘Are Human Rights Violations In Kashmir #InYourName’

The next protestor is demanding a UN human rights investigation into all killings in Kashmir, obviously aimed at Bharat’s security forces. 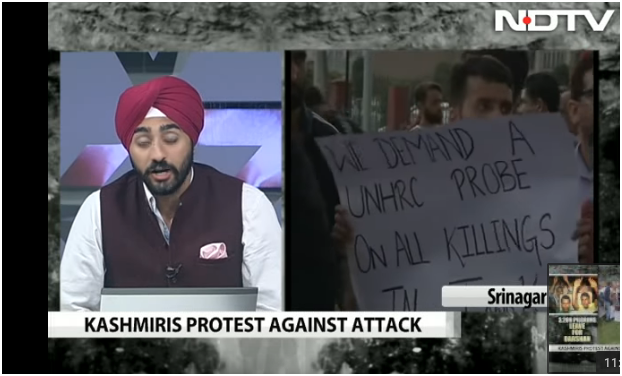 Now let’s look at this gentleman—he says that “Kashmiris condemn the killing of Yatris, BUT do Indians condemn killings of Kashmiris?” In other words, he is using this opportunity to point the blame in a circular way back at Bharat. Indeed, there was ONLY one banner that I could see which was a protest against the Yatri massacre (you can see it in the video).  The rest were protests against Bharat, several with the allegation that Bharat might have committed the killings.

So this is the great Kashmiri protest that our media channels are talking about? Shame on them!

This is not a protest of the Yatri massacre, it is an insult to their memory!

(PS: The very next day, there was a real Kashmiri protest—on the killing of a Jihadi terrorist. You can see the video for yourself, and see what a Kashmiri protest looks like).