Western media’s bias against the Narendra Modi led NDA government, often reflected in reports filed by liberal Indian journalists employed by these outlets, has been well documented. Another such egregiously incompetent and Hinduphobic piece appeared recently in America’s iconic New York Times newspaper regarding Bharat’s handling of the Covid-19 pandemic.

Let us look inside the New York Times article on Bharat’s ‘Virus Trains’ by Jeffrey Gettleman, Suhasini Raj, Sameer Yasir, and Karan Deep Singh. They collected reams of data and wrote a story entirely on one district out of 718 districts in the country, and lied about the data. 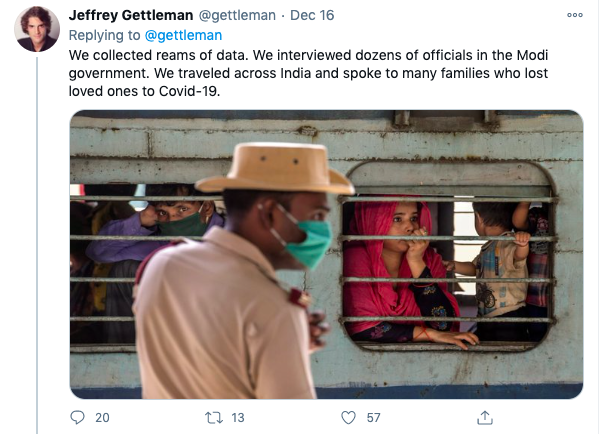 The New York Times story starts off with typical disdain, pity, and condescension that privileged white people show towards people of color. The slumdog flavor has to be sprinkled for local consumption (i.e. in the US). A sense of pity has to be evoked.

The fact that Bharat has one of the lowest per million death due to Covid, seems to have lost on the four great journalists who collected reams of ‘data’. One wonders what data were they collecting?

The story then reaches Ganjam, a district in Odisha. From here on, the rest of the article talks mostly about Ganjam alone. While we were promised reams of data and the trains were declared ‘virus trains’. They could only manage details from Ganjam. Here is real government data.

A mandatory reference to Modi and Upper Caste Hindus is also made in the article. The four reporters say that the task force, i.e. Upper Caste Hindus, could not contemplate the results of the lockdown. This accusation has been answered by Sanjeev Sanyal in his interview with Suhasini Raj.

The full conversation can be heard here:

As promised, this is the full recording of my discussion with NYT journalist Suhasini Raj about the Indian response to the Covid19. Conversation starts at 1:50
2/nhttps://t.co/s59BUiMZK5

Sanjeev explicitly mentioned the Barbell Strategy used to mitigate the lockdown risk. He even asked her if she understood what that means and then explained it.

The Four accuse the trains carrying migrants of becoming hotspots for corona. Of course, they don’t give out any data from the reams they collected. They quote a ticket collector.

How else should a lockdown be announced? The idea of a hard lockdown is to stop the movement of people and hence, to stop the spread. Had there been a week’s lead given to people for the lockdown, one can imagine the kind of panic that would have struck.

An estimated 2-7 lakh migrants came back from Surat to Ganjam since the trains started. If one imagines that the trains were virus hotspots, one could imagine the number of infections passed on by these people. The picture here tells a different story.

Did migrant workers take the virus with them to their villages? Yes. It is inevitable. Did the trains become ‘hot spots’? No. Bihar, Assam and Chhattisgarh each accounts for less cases than Delhi, where there were no migrants coming in.

Jeffrey Gettleman, Suhasini Raj, Sameer Yasir and Karan Deep Singh claim to collect reams of data but lie in their report. Here is the actual mortality of 246 as compared to The New York Times‘ fake claim of 320 in Ganjam.

We will update this article if NYT offers any clarification on this point by point rebuttal to their selectivity and bias.