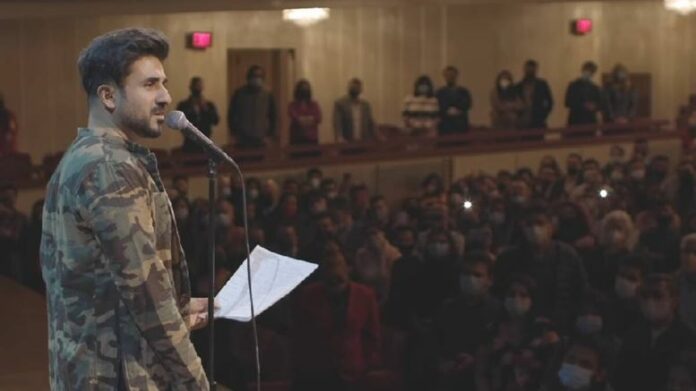 ‘Stand-up comic’ Vir Das recently shamed Bharat and Hindus in the USA, not totally unexpected from a HINO (Hindus in name only) like him. In the 7-minute monologue, Das spewed his entire spectrum of anti-Bharat invective but saved his worst jibe for Hindus. “I come from a country where we worship women during the day and gangrape them at night,” Das said.

Das’ “comedy” was full of other tropes denigrating Bharat and Hindus – most of it appears on the surface as a dislike for PM Modi, but actually betrays a visceral, almost subconscious aversion to Hindu Dharma and the Dharmic Bharatiya civilization. Ironically, the likes of Das who go about spreading negative stereotypes about Bharat also complain when they face racism in the West.

Das ended his routine with – “But as I stand here before you, I am reminded that I represent a great people. Great people, who built a great thing (India) that is turning into a memory.”

What is this great thing (India) that Das is talking about? If you think it is the ancient Bharatiya civilization that has produced great self-realized sages, yogis, philosophers, kings & queens, scientists, mathematicians, linguists musicians, artists, sculptors – you would be sorely wrong. The civilizational memory of the likes of Das doesn’t extend beyond the last few centuries, and their fixation is with glorifying India from 1947-2014, in particular the period spent under the leadership of Nehru-Indira-Rajiv.

Vir Das and his hypocrisy

Hypocrisy comes naturally to the HINO left-liberal cabal and the ‘comic’ had probably expected Bharatiyas to ‘cheer’ his attention-seeking act. Well, the filth in the minds of people like Das is seen on their social media (SM) pages. While he was trying to present Bharatiyas in general and Hindus in particular, as people who don’t respect women, his Twitter page gives us proof as to how much he ‘respects’ women.

His cheap comments targeting mothers of those who are in disagreement with his views are appalling to say the least. His tweets just keep getting nastier and he probably needs a lesson on two on how to respect women.

Just like every HINO, Das is not just a Hindudveshi but also a Islamic terror apologist. He is someone who passes judgment on Hindu Dharma even though he as no knowledge about it and goes on to defend Islam in typical left-liberal rant saying terrorism has nothing to do with Islam.

His unparliamentary comments on BSP chief Mayawati displays his sick mentality. Apparently, stand-up comedy is all about objectifying women.

As journalist Pradeep Bhandari highlighted there is a lobby working to promote ‘stand-up comedians’ with the agenda to insult Santana Dharma and Bharat on international platforms.

Then there are the usual suspects like Nidhi Razdan who rushed to his defense by drawing false equivalence. Entertainer Prakash Raj and Congress leader Shashi Tharoor were among those who rushed to defend Das. However, the message sent across by social media users is loud and clear – one can’t get away with insulting Bharat in the name of comedy.