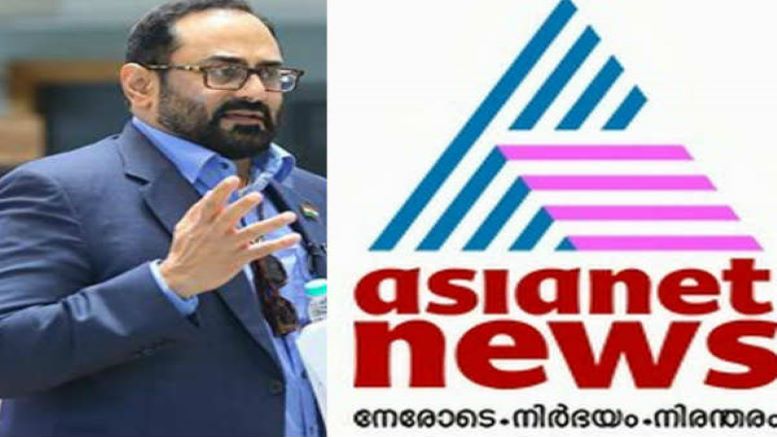 BJP MP Rajeev Chandrasekhar has become a victim of conspiracy hatched by his own left leaning journalists at Malayalam news channel Asianet News who aim to discredit him and send him packing from Kerala. It has been reliably learnt that the Vice Chairman of Asianet K Madhavan, who has a history of working against Chandrasekhar, is leading the attack by using left leaning journalists and reporters with a hatred for nationalism and BJP-RSS combine.

Despite Rajeev being a major shareholder, operations were handled by Madhavan who used this to his advantage by promoting anti-BJP/RSS and anti-national ideology in the media outlet. He ensured that left leaning journalists were recruited and honest journalists sincerely working for the progress of the channel were cut down ruthlessly. Madhavan faced opposition from Rajeev for his biased acts which enraged him and he began using dirty tricks to get back at the MP.

Sindhu Suryakumar, a known BJP baiter and Hindu hating journalist, was chosen to lead the attack. Sindhu and other leftist journalists were encouraged by Madhavan to conduct programs bad mouthing PM Modi and HM Shah. Rajeev Chandrasekhar resigning from the board after joining BJP in a bid to ensure journalistic freedom at Asianet came as a golden opportunity for Madhavan and Sindhu who upped the ante. When Chandrasekhar was made the NDA vice chairman in charge of Kerala, Madhavan, in a bid to drive the MP away from Kerala, planted false news among his employees stating that Chandrasekhar was planning to take over the company after dismissing all left leaning employees and recruit Sangh Parivar nominees in their place.

Among the several dirty tricks employed by Madhavan and Sindhu using their cronies to target the MP included making a false allegation of government land usurpation by Niraamaya Resort owned by Rajeev’s company Jupiter Capital. It is a luxury resort located alongside the ecologically sensitive Vembanad Lake at Kumarakom in Kottayam. At first, Sindhu used her friend and local Panchayat president CPI (M)’s AP Salimon to disrupt the functioning of the resort. They then alleged that the resort had usurped around 650 square feet of cultivable Government land set aside for some purpose known as Poramboke land. However, this allegation fell flat and seemed outright silly since the resort owned eight acres land in the area.

When these tactics failed to yield the desired result, Sindhu used Asianet News Alappuzha reporter Prasad to run news against CPI (M) Minister Thomas Chandy. Asianet telecast the news that Chandy had built his Lake Palace Resort on government land without valid documents on the banks of Lake Kuttanad. It did have the desired effect as enraged DYFI (Democratic Youth Federation of India, CPM’s youth wing) state leaders and close associates of Sindhu, AA Rahim and Mohammad Riyas sent their cadre to attack Niraamaya Resort. Five cottages inside the resort were destroyed in the November 2017 attack.

Both Madhavan and Sindhu had hoped that this would make Chandrasekhar exit Kerala and leave the field open for them. Unfortunately for them, these incidents actually made Chandrasekhar understand the entire conspiracy and instead of backing off he stepped up to take control of things at Asianet. He was able to turn Madhavan’s aide and Business Head Frank Thomas’ allegiance towards himself and HR Head Rajalakshmi too crossed over to Rajeev’s side.

All their failures only made the editorial team even more aggressive in their efforts to target the BJP and thereby create as much trouble for Rajeev as they could. They stepped up their efforts in the hope that Rajeev would be shunned by the central BJP leadership and therefore began running fake news which included the one on Delhi riots for which the channel was handed a 48 hour ban. Sindhu’s Delhi mercenary PR Sunil reported the fake news about mosques being torched and Muslims being killed in large numbers during the anti-CAA protests. It was only after Rajeev offered a written apology that the ban was withdrawn which unfortunately allowed Media One to escape a ban as well for running fake news.

It has been reliably learnt that Chandrasekhar is working out measures to ensure that Asianet doesn’t run anti-Hindu and anti-Bharat fake news. In the meanwhile, Sindhu and Madhavan’s plans to target Rajeev using radical Islamists and urban naxals stands exposed.