A big sex racket involving minor girls was unearthed in Madhya Pradesh, when 5 girls, including four minors, revealed their sexual exploitation at the hands of a veteran journalist Pyaare Mian (68) of Bhopal. The girls were found loitering in a drunk state late at night in Bhopal city on 11 July. Pyaare Mian was absconding and was finally arrested from Kashmir on 15 July.

As per an Amar Ujala report, on 11 July, 4 minor girls and 1 woman were found roaming in inebriated condition in the wee hours. In their statement to police, they alleged that they are being sexually exploited by one Pyaare Mian who regularly exploits under-aged girls and also invites businessmen, builders, eminent personalities and politician friends to rave parties. The nexus is said to have exploited at least 50 minor girls over the years.

Pyaare Mian is well known in Bhopal as owner of a newspaper. When police raided his apartment , he escaped from Bhopal to Kashmir. MP police arrested him from Srinagar with help of J&K police and his contacts in the valley are also being investigated.

When police raided his Ansal Apartments flat, they discovered hoards of pornographic material, expensive foreign liquor and illegal wildlife trophies from the premises. They also discovered pedophilia videos from a hard disk & sex toys which indicate the kind of depravity that was being conducted there. The place even had a makeshift dance bar. He reportedly had two flats in the posh apartments, and one of his wives was also staying there – the minor girls were plied with liquor, exploited and abused in her presence.

On investigation police found that Pyaare Mian was running a sex racket with help of driver Anas, manager Owais, Rubia Bi and Sweetie Vishwakarma (22). The minor girls, who used to call him Abbu on his insistence told police that Pyaare even used to take girls, most of them below legal age, overseas to Dubai, Thailand & Singapore for his sexcapades. After the girls attained legal age he would marry them off but only after trapping another young girl of her family. According to initial investigation, at least 50 girls have been exploited at the hands of Pyaare Mian.

His modus operandi was to trap girls from poor families who needed money, primarily through Sweetie Vishwakarma who acted as a pimp. After raping the girls, he would start forcing them to attend parties with his friends. The girls were paid around Rs. 10,000 per month. To further his father-figure charade and dupe girls’ parents, he was also known to attend puja ceremonies at their homes.

A complaint has also been lodged by advocate Jagdish Jawani that Pyaare Miyan also forced the minor girls to convert their religion. He also had underworld connections and a known history-sheeter of Bhopal had camped outside the police station to try and pressurise police for his release.

Pyaare Mian has been a player in influential circles of Bhopal for decades. His rise in the world of journalism is closely linked to his political connections. In 1990, he had squatted on a luxurious legislators’ guest house which was temporarily allocated to him by the govt. for conducting a workshop. He started living with his two wives and children in that VIP location, and managed to disregard a court order to vacate the premises. Finally, he was evicted in 2002 through a dawn operation by police. Then too, around 40 crates of foreign liquor and several incriminating documents were recovered.

A few years later, Pyaare Mian was awarded a govt. bungalow in a coveted part of old Bhopal, ostensibly for his news business.

After the scandal broke, MP administration is taking no chances. It has designated six police teams to separately investigate his influential contacts, illegal properties, economic offences etc. Apart from police, Intelligence Bureau, Enforcement Directorate, Forest department and Income Tax departments are also looking into his records. According to one source, he had 46 properties under him, of which 22 are ‘benaami’. One Audi & one Fortuner cars have also been attached. 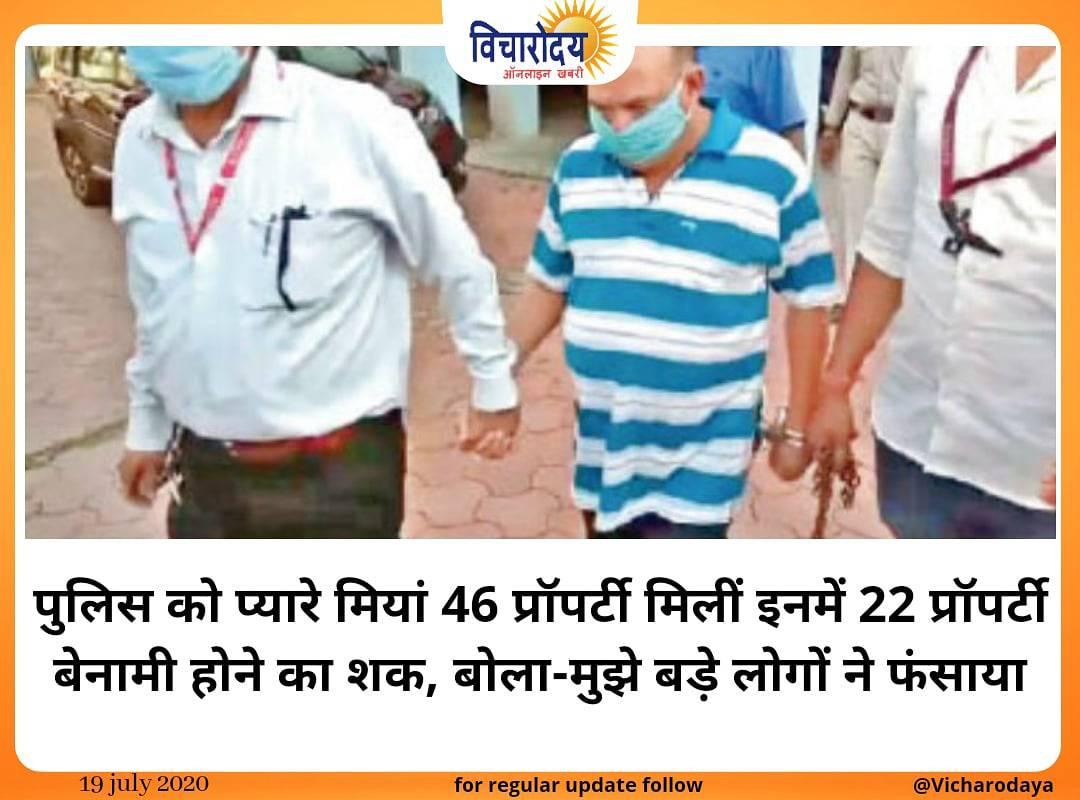 MP police did not waste any time in demolishing his known illegal properties one by one, just as UP police demolished gangster Vikas Dubey’s home in Uttar Pradesh. The bulldozed properties included a marriage hall, an apartment etc. Police has also booked Pyaare Mian in a land grab case along with Zafar Khan. A man named Khurshid Alam who gifted cash & car to him has also been taken under arrest. In another case, he has been accused of usurping Rs. 60 Lac in connivance with his wives & son Shahnawaz.

So far, FIRs have been registered in 3 police stations against accused on complaints by 6 minor girls and his chances of coming out on bail are slim. For safety of survivor girls and to make sure they do not come under any pressure, they are not being handed over to their kins but were rather sent to shelter homes.