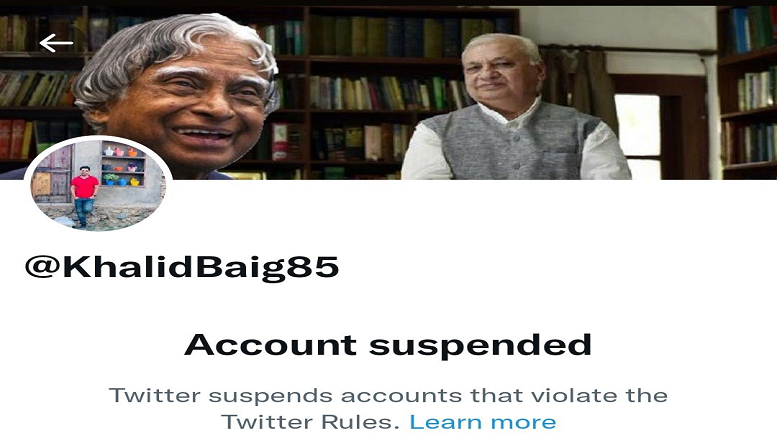 Khalid Baig is the latest victim of what seems to be a targeted campaign to stifle and muzzle voices of rationality. Such efforts leading to the permanent suspension of his Twitter handle should be viewed from the broader context of how Big Tech’s biases are in violation of Constitutional law.

Article 19 of Indian Constitution (Freedom of Expression) is being violated by permanently banning the individuals account. What is worse is how Big Tech firms can arbitrarily suspend accounts and obfuscate from the responsibility claiming its the work of opaque algorithms that run these platforms.

Behind the smokescreen must be people involved who have their own personal biases that get reflected in such erratic suspensions. It is rather strange how the moment one speaks out against violence & bigotry and in favour of nation building they get suspended, while their left-liberal opponents can get away with bigotry with impunity. Several examples can easily be brought to light where rape and death threats against women, children and some religious groups are specifically targeted.

However, these platforms ignore such hate speech and bigotry entirely. Additionally, tweets that incite violence on the streets like those by the fact checker guy are featured prominently with several bot accounts liking and retweeting the same.

This is a Catch-22 situation as there is no other way for a broader outreach but use the same biased tech platforms. It takes consistent efforts and lot of hardwork to build a sizable audience on these platforms and silencing such people is draconian. This is not Nazi Germany. It seems like there are people who revel in sadistic joy by dividing Bharatiya society into groups and watch them get into dog fights rather than involve in a sober and elevating debates. While governmental regulation of platforms is too interventionary, they definitely need to be monitored under a judicial committee under the aegis of the Hon’ble Supreme Court of India to look into any constitutional violations by Big Tech firms.

Social Media platforms seem to undermine the law of the land & the authority of the Supreme Court in their own self-interest. This is extra-judicial behaviour and its high time Twitter India obeys the law of the land and respects the sovereignty of Bharat. National interests should be determined by residents of the land rather than businesses. Its not colonial era anymore. Time more such voices come forth and express their displeasure.

More importantly show your support and solidarity to the Indic cause by following Khalid Baig and Amana Ansari on their YouTube channel in large numbers.

(The article has been compiled from the tweet thread of @ZZoariah.)