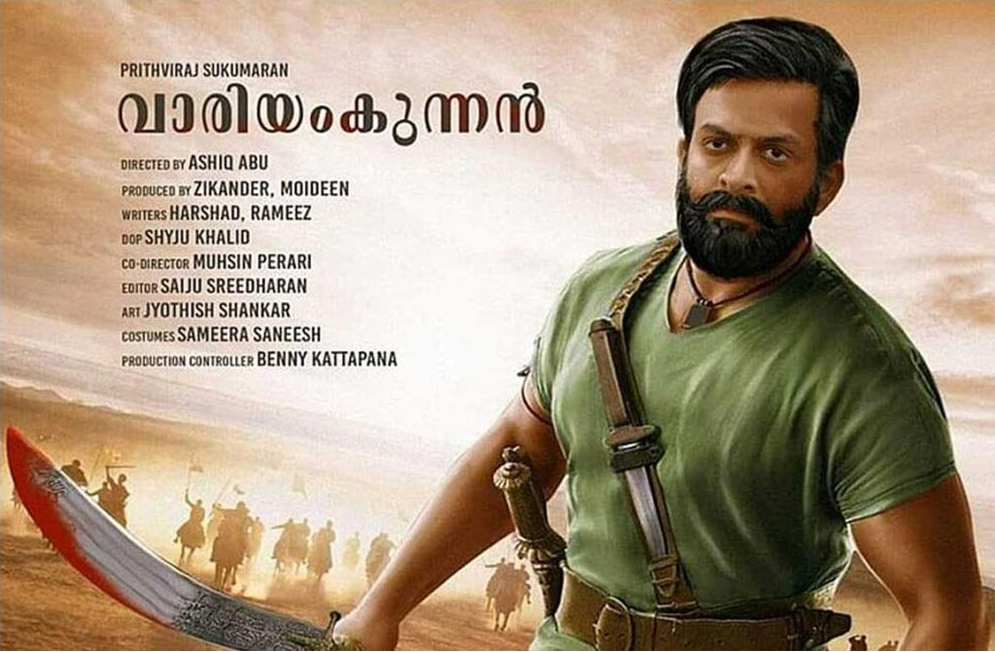 Islamists are sinking their fangs in the film industry of Kerala, as in many other walks of life. Now they have started recruiting Hindu actors to create false images of past tyrants. The latest to fall for a few Dirhams is Malayalam actor Prithviraj. He plays the lead role in the movie ‘Vaariyamkunnan’ which is based on the life story of Variyam Kunnathu Kunjahammed Haji, an Islamic radical who led the 1921 Moplah rebellion against the British as part of the Khilafat movement and unleashed a blood-curdling massacre of Hindus.

The initially chosen script-writer of the movie, which is slated for release next year to coincide with the 100 year anniversary of the rebellion, was Ramees Mohamed – a known SDPI (the political arm of quasi-terrorist org PFI) and Taliban sympathizer.

This confirms the doubt of Hindus in Kerala about the interests &funding behind this movie@NIA_India pic.twitter.com/7ndjt4EDgH

Ramees has now backed off from the project after alleged differences with director Aashiq Abu and other crew members over his Islamist views. But the other writer on the project, Harshad, appears to be no better with similar extremist views!

A more lathel ex SIMI co script writer of #Variyamkunnan #harshad. He is as antinational as Ramees who backed out of the film couple of days back!

The only doubt left now is what @PrithviOfficial has to do with these Jihadis! pic.twitter.com/n2sWUIEqL2

This makes us think that Ramees’ removal from the project is just a publicity stunt. His brazen Islamist views were hurting the movie’s PR, and there is every chance he will be silently repatriated when things cool down. Anyway, by choosing to make a movie glorifying a genocidal maniac, everybody involved in this project has already lost the authority to take the moral high ground.

Meanwhile the director of the movie, Aashiq Abu claims to be a communist. He and his wife Rima Kallingal have cases filed against them for stealing funds collected for the flood victims of Kerala.

Variyan Kunnath Kunjahammad Haji, born in the 1870s in Pandikkad, Malappuram district of Kerala, came to prominence during the 1921 Moplah rebellion. The Muslims, the Communists and INC in Kerala still consider this man a ‘freedom fighter’ as if he had fought the British for independence. In fact, Kunjahammad waged jihad to establish an Islamic caliphate exactly like the modern-day ISIS terrorists do.

He belonged to a family with a history of participating in previous such rebellions against the British. Information on his early life is limited, except that he made a visit to Mecca in 1909 under mysterious circumstances. As per one account, the Mecca trip took place immediately after his name cropped up in two incidents of highway robbery in 1908 and 1909 – the first incident was robbery of a mail wagon where no one was harmed, but the next year, two goldsmiths were murdered and robbed.

Some also believe that Haji was on the radar of British authorities for preparing for jihad against them by “obtaining fatwas from religious leaders” and that the incidents of robbery were aimed to raise funds to wage jihad. Soon after his involvement in the robberies came to light following the arrest of an ex-sepoy in the case, he left for Mecca and returned only in 1914 when WW1 broke out. It is said that upon his return he gave a written undertaking to the British government before he was freed of surveillance.

By 1920, Haji and his mentor & friend Ali Musaliyar had become the leaders in Kerala of the Khilafat Movement – a pan-Islamist movement launched by Indian Muslims to restore the caliph (king) of the Ottoman Caliphate, considered the global leader of Sunni Muslims, after the Ottoman Empire’s loss against Britain in WW1.

Gandhi thought that appeasing the seven crore Muslim population by supporting their Khilafat movement was the best way to get them involved in the national freedom struggle against the British. Khilafat committees were organised all over Bharat as part of the civil disobedience ideology, hoping that the Muslims would join the anti-British movement.

But ultimately the movement fizzled out by 1924 with Turkey choosing to become a republic under Kemal Ataturk where Khilafat was banned. Except for modern-day Malappuram, where the Moplah Muslims were a majority, nowhere else in Bharat did things take a turn for the worst during the Khilafat movement. Neither Gandhi nor the INC could have foreseen this dramatic turn of effects in their wildest dreams.

History tells us that the Moplah Muslim Rebellion started, predictably enough, with rumours of a mosque being desecrated in Tirurangadi on 21st August, 1921 by policemen. The police were in fact searching and seizing records of Khilafat volunteers. A District Magistrate and a Police Superintendent (British officers) and many policemen were killed.

That started a chain reaction where police stations were attacked, government treasuries and offices were overrun by zealots who destroyed property documents all over Malappuram. This came in handy later when Hindus were driven out of their houses and their property usurped.

Kunjahammad Haji declared himself the ‘Sultan of Ernad’. And then the atrocities against the Hindus started. Hindu women were raped with many jumping into wells to escape the ignominy. Pregnant women were carved using knives. Hindu men were forced into conversion and the ones who resisted were killed. Around 100 temples were either demolished or desecrated by hanging cow intestines on murtis of Hindu gods. Many Hindu families migrated to either Palakkad or Kozhikode. Meanwhile, the coffers of the Khilafat started overflowing with the wealth and gold of common Hindus. By 28th August 1921, the British administration had been driven out.

The cruelty and mass murder displayed won Haji many radical fans. Hindu extermination became a daily ritual. The British and Hindu leaders, meanwhile, were not sitting idle. Army contingents belonging to the Gurkha Regiments were being brought in. British army officers were also training a para-military force consisting of only Hindus. It was called the Malabar Special Police (MSP) and it exists to this very day as a part of the Kerala Police.

It was this force that led to the ultimate extermination of Haji’s mini-Khilafat towards the end of 1921. By the first week of 1922, the rebellion was crushed. Arya Samaj conducted ghar wapsi of many Hindus, forcibly converted to Islam, back to their original religion.

On January 5th 1922, Subaidar Gopala Menon and Inspector Ramnath Iyer arrested Variyan Kunnath Kunjahammad Haji. By then, nearly 10000 Hindus had been killed by the Moplah jihadis. Out of the nearly 50000 strong jihad force, 2266 were killed, 1615 were injured, 5688 were captured and 38256 surrendered. On the 20th of January, Kunjahammad was shot to death in Malappuram.

The myth that he was a ‘brave nationalist’ is just that, a myth. He and his fanatical followers unleashed such a terror on unsuspecting Hindus that Dr. BR Ambedkar was moved to write in his book ‘Pakistan or the Partition of India’:

“The blood-curdling atrocities committed by the Moplas in Malabar against the Hindus were indescribable. All over Southern India, a wave of horrified feeling had spread among the Hindus of every shade of opinion, which was intensified when certain Khilafat leaders were so misguided as to pass resolutions of “congratulations to the Moplas on the brave fight they were conducting for the sake of religion.”

It is said that the Moplah massacre was one of the events which convinced Dr. K. B. Hedgewar of the need to organise Hindu society, leading to the formation of Rashtriya Swayamsevak Sangh in 1925.

The Moplah ‘Rebellion’ was a systematic cleansing of the Hindus in a Muslim-dominated area of Kerala. The extremists were led by Variyan Kunnath Kunjahammad Haji. He will forever be remembered as a religious zealot and a Islamo-fascist. Bringing up his life in theatres is rubbing salt in Hindu wounds, which have not fully healed yet.

Islamist apologists can try to twist history and glorify the Moplah genocide as much as they want, the reality was clear during the anti-CAA protest marches in Kerala this January where Muslim youth dressed up in traditional Moplah attire held up chilling banners with the message ‘Reinventing 1921’.