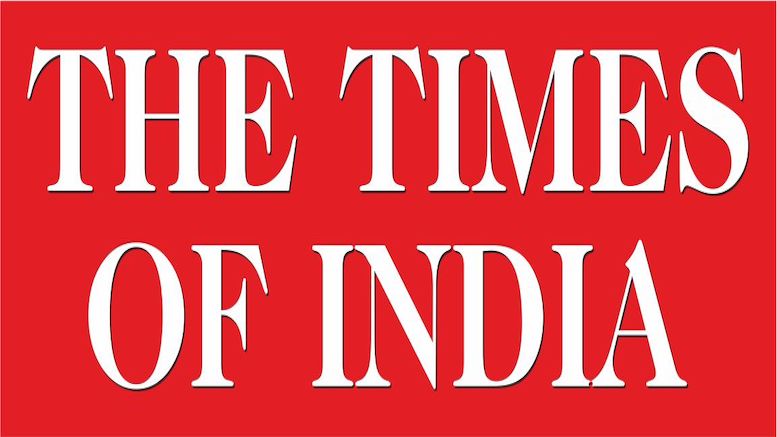 Yet another shocking incident of preying on a Hindu girl by a Muslim man has come to light from Pakistan. This time a teenager was abducted while her wedding to a Hindu groom was ongoing, forcefully converted and married off to a Muslim man in Karachi.

This is nothing new to clear-sighted observers of the true nature of Pakistani state and society – it is conservatively estimated that around 1000 Hindu girls, including 8-12 year minors, are annually abducted, converted and married off to Muslim men in Sindh province of Pakistan alone.

But what did come as a shocker to woke Hindus is the fact that the uber-liberal, largest-selling English language newspaper Times of India (TOI) covered the news on its front page!

Now, anyone who has seen TOI for the last two decades knows that it’s a tabloid masquerading as a serious daily. The MD of the Times Group, Vineet Jain, has admitted, “We are not in the newspaper business, we are in the advertising business.” The paper knows that yuppie urbans are it core audience, and hence it serves a constant stream of news and views which affirm the liberal bias, interspersed with ads, more ads and irrelevant local news from US/Europe. 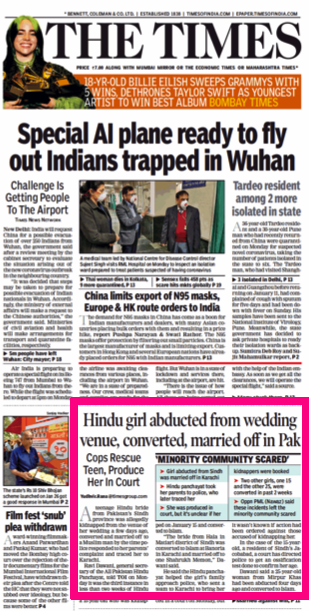 Quoting from the report –

“A teenage Hindu bride from Pakistan’s Sindh province was allegedly kidnapped from the venue of her wedding a few days ago, converted and married off to a Muslim man by the time police responded to her parents’ complaint and traced her to Karachi.

Ravi Dawani, general secretary of the All Pakistan Hindu Panchayat, told TOI on Monday it was the third instance in less than two weeks of Hindu girls being targeted, including a 15-year-old who was kidnapped on January 15 and converted to Islam.

“The bride from Hala in Matiari district of Sindh was converted to Islam at Banoria in Karachi and married off to one Shahrukh Memon,” Dawani said.

He said the Hindu panchayat helped the girl’s family approach police, who sent a team to Karachi to bring her back to Sindh. She was produced in a court on Monday, but it wasn’t known if action had been ordered against those accused of kidnapping her.

In the case of the 15-year-old, a resident of Sindh’s Jacobabad, a court has directed police to get an ossification test done to confirm her age.

Dawani said a 25-year-old woman from Mirpur Khas had been abducted four days ago and converted to Islam.”

The girl for whom the bigoted Pakistani judges have ordered a ‘bone ossification’ test to determine her age is actually 14-year-old Mehak Kumari who was abducted by a 28-year-old Muslim laborer, who already had two wives. Watch how the girl was produced in court to record her statement in the presence of her abductor Ali Raza & his goons.

Scenes from the local court where Mehak Kumari was presented to record her statement in the presence of her abductor Ali Raza. pic.twitter.com/Fo70fuYHow

Topics which affect the lives of real Hindus – right to a dignified life in their spiritual homeland, sanctity of their temples, right to keep cows without having them stolen and butchered, keeping their daughters safe from religiously-motivated predators, immunity from missionary bigots abusing their Gods and invading their most sacred places and homes-  all of these topics are anathema for a paper like TOI.

So if TOI is covering the abduction of a Hindu girl in Pakistan on its front page – it only shows that the ground reality of brutal Hindu-persecution in a Muslim-majority country or region, is becoming impossible to ignore even for hard-nosed liberals. Hindus need to keep speaking up – truth will prevail.