The rise of Hindu hatred: Shortcut to fame or conscious propaganda? 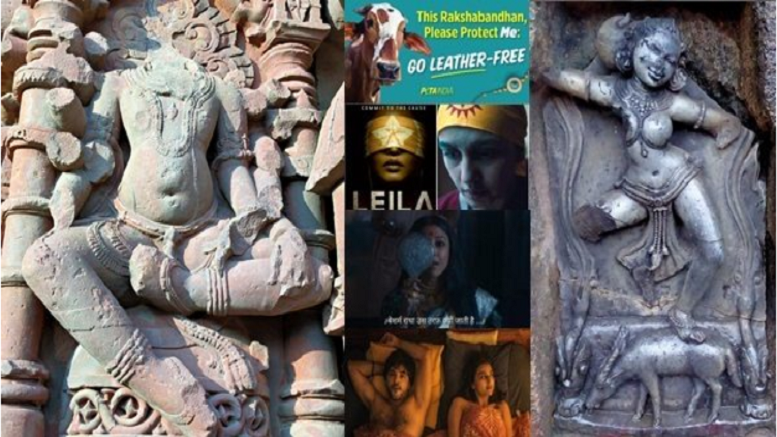 For over a thousand years, our grand ancient temples were vandalized and razed to the ground. Sculptural symbols that exhibited as history in stone and carried a legacy of the world’s oldest cultural identity were desecrated. Deities in stone were defaced. By whom? Islamic invaders and plunderers!

Our ancestors offered resistance and saved many of our ancient temple sites. Hundreds of temples were rebuilt every time they were destroyed. Today, thousands of the vandalized temples and desecrated Moortis scattered across the country stand as mute objects narrating wordlessly to every onlooker two aspects of the past – of glory and of destruction. The trauma that prevailed for over a thousand years, still reigns supreme, conscious or unconscious, in our minds.

But after independence, instead of the resurgence and reclaim, Hindu hatred gradually took shape as a sapling and today this has emerged as a huge tree! Who are mostly to blame and at fault? Majorly Hindus!

Digitization has taken the world by storm in every sphere of life, right from businesses to relationships. Virtual connect between individuals and peoples in two edges of the earth happens in seconds. Information is accessible at the tip of the finger. Today no news, whether reported or unreported remains hidden. Thanks to the power of social media! Indeed social media is a boon to many and a bane to few depending on how the platforms are exploited to ones advantage or disadvantage.

The latest addition of digital influencers are the likes of Netflix, Amazon Prime, the recently banned TikTok, and the list goes on. Hindu hatred has seen a new rise in recent times. To add to this is the type of content featured targetted to poison young minds.

PETA India earlier voiced against Dahi-Handi, Diwali, Jallikattu and now they are raising voice against Raksha Bandhan. They have placed billboards in multiple cities across Bharat featuring a cow proclaiming, “Protect Me – Go Leather-Free” with hashtags ‘GoLeatherFree’, ‘NotOursToWear’, and ‘VeganLeather’ featured on their official Twitter handle. I have never seen a leather Rakhi in my life. I have never tied a leather Rakhi nor have I seen any Hindu in my circle/neighborhood/family tie leather Rakhis.

It has become a fashion for web series/shows and Bollywood to be in competition in depicting Hindu deities in bad light. So are the negative portrayal of Hindu symbols, rituals and traditions! And who are the directors and producers who release such? Mostly Hindus! And who are the script writers and actors? Again mostly Hindus! Can the same producers and directors dare to broadcast hateful content pertaining to Gods or symbols of other religions? It is a big No!

In no time Shemaroo tweeted, seeking unconditional apology to the ISKCON community and declared of disassociating from any further involvement with Surleen Kaur and comedian Mr Balraj Syal. Again it was the power of social media that resulted in the swift action by Shemaroo.

Web series Paatal Lok by Bollywood actress Anushka Sharma, premiered on Amazon Prime, promotes anti-Hindu ideology. But it has garnered immense appreciation with The Indian Express and The HuffPost India deeming it as ‘the best Hindi Film/Series of 2020’. All at the cost of Hindu hatred!

The web platforms have global viewership and series like Paatal Lok is only painting an incorrect picture of Hindus and Hinduism at the global level. For example, a scene shows a Hindu sadhu cooking meat and a politician eating. The backdrop of this scene has an image of a Hindu Goddess sitting on a cow. What does the the director intending to say indirectly through this portrayal? The web series glorifies beef-eating and portrays several scenes that are anti-Hindu in content.

For example, the series depicts Hindu employees as racists discriminating and harassing non Hindus at work places, as Hindu employees are racists. A Hindu in a train is shown beating a Muslim man for opening a lunch box containing beef in train. The series also insults the Nepali community, using casteist slurs.

Netizens have slammed Paatal Lok and Anushka Sharma citing various anti-Hindu scenes and dialogues. A netizen tweeted thus: “o basically #patalok is a well-staged anti-hindu, anti-brahmin, anti-RW drama. Which doesn’t look like a propaganda to you but is a very strong one. From web series like Leila to Patal Lok,there’s a constant effort to make people anti-Hindu.”

So Paatal Lok mocks at Hindu religious beliefs and the directors and producers get a easy getaway. When will this stop? Brahmin bashing has reached a new high in all media – Bollywood, web series, social media, literature.

So, Anushka Sharma doesn’t stop here with her Hindu hatred content. Yet again, she releases Bulbbul on Netflix that hurts Hindu sentiments. A folk song used in Bulbbul degrades and stigmatizes the character of Radha and Krishna. The translation features Kanha as ‘Haramzada Kanha’ and Radha as ‘Besharm Radha).

A Netizen tweeted thus, “This … is getting so mainstream that most Hindus doesn’t even find it appalling. After being done with mockery now they have resorted to straight up abusing our gods. This won’t be accepted.” It seems after the uproar, the translations of the folk song have been put right, as depicted by Netizens.

Ancient texts find no mention of Radha. Later texts pertaining to Krishna mention Radha as divinely connected with Krishna, not physically. Bankin Chandra Chatterjee’s Krishna Charitra based on decades of research mention Krishna being wedded to only Rukmini. Interpolations, commentaries, and later additions on Krishna have only stigmatized the character of the Yogpurush. Today when we utter the name of Krishna, we hardly talk about the Bhagavad Gita and his many warrior exploits, but discuss only about Radha and gopis! I have refuted many such myths pertaining to Krishna in my books The Eighth Avatar and Blue Vanquisher.

In September 2019, a member of the Shiv Sena IT Cell filed a police complaint against Netflix for hurting Hindu religious sentiments and painting an incorrect image of Bharat through a number of web series. Sacred Games, Leila, Ghoul were few of the series he mentioned. Leila depicts a dystopian future demonizing Aryavrata and projecting Hindu nationalists capturing the machinery of the state with Hindu imagery and symbols cast in negative light.

Sacred Games, besides hurting Sikh sentiments wherein Saif Ali Khan portrayed as Sikh cop is shown throwing his kada into the sea, also portrays babas as self-absorbed individuals using dharma as business. The series tarnishes the the Guru-shishya relationship. Ghoul portrays a dystopian Bharat showing army in negative light and Bharat as a surveillance state run by a totalitarian regime with Muslims depicted as victims. Despite voices being raised and police complaints filed, Hindu hatred continues to be shown in Netflix and other related channels.

Hindu hatred in Bollywood has been rampant. Deepa Mehta’s Fire released in 1996 starring Shabana Azmi and Nandita Das is based on Lihaaf (The Quilt), a 1942 Urdu short story written by Ismat Chughtai. Lihaaf is about two characters Begum Jan, the protagonist and Rabbo, a servant girl and about their homosexual relationship. Deepa Mehta does base her film Fire on Lihaaf, but she uses Hindu characters Radha and Sita. Why Hindu characters and why Radha and Sita associated with Hindu deities? Besides a Swamiji is shown in bad light in the film. There are many more films that are anti-Hindu.

Controversies erupt every time and these anti-Hindu films/web series emerge super hit. Few Hindus, as usual, raise voice and then keep quiet until another such hateful content pertaining to our deities or cultural symbols and rituals is broadcast.

When will this stop? How will this stop? Will only boycotting such movies/web series help? Only actions taken in present will help stop broadcasting of anti-Hindu content in future.

Note: I would rather not use the term ‘Hinduphobia’ that is, unfortunately, already a coined term because Yogaditya Singh Rawal and I believe there is nothing to be afraid of in Hinduism and ‘phobia’ is something that doesn’t go with the term ‘Hindu’.

(This article was first published on the myindiamyglory.com and is being reproduced with permission, after minor edits to conform to HinduPost style-guide)

(Featured image source: Left and right images of Moortis clicked by author and the middle images sourced from Google.)