In a shocking incident in Pune, 17-year-old rag-picker, Sawan Rathod, was set on fire by Ibrahim Shaikh, Imran Tamboli and Zuber Tamboli in broad daylight last Wednesday, 13 January. Sawan, who belonged to the Banjara community (a nomadic community classified as backward in many states), sustained 75 per cent burns in the gruesome crime. He succumbed to his injuries on Friday morning.

In a video recorded by members of his community on Thursday night, and which is now with the police, Sawan is seen saying,

“I was working with my family in Pandhapur. I had a dispute with them (family) and came to Pune looking for work…While I was taking a leak, three persons objected and asked me my name. I said Sawan Rathod. They asked me if I am Hindu? I said, yes. Then they poured something over me from a can and set me on fire.”

The three Muslim assailants claim that they burned Sawan as they suspected him of ‘stealing bike batteries’. See the full report here. Note how the writer of the linked report implies that the communal ‘angle’ is still not clear – despite the statement of the victim.

Why is the dying declaration of this 17 year old not national news? What kind of bigotry and hatred drives someone to burn alive a hapless teenager based on his religion? At a time when all sorts of politics is being played over the suicide of Rohith Vemula, why is there no prime time discussion on this gruesome crime? Why the haste to play up the Dalit caste angle in one incident, and brush the brutal murder of another Dalit under the carpet?

If you scan the Pune editions of various national newspapers for 14th January (the day after the crime), there is NO reference to this incident, even in the inside pages – Exhibit A, Exhibit B.

The message from our media and elites is clear – Hindu lives matter only if they can be used to paint Hindus as a caste-ridden patriarchal society fueled by an oppressive faith. Else, they are just cannon fodder in the pursuit of whatever political ideology is being attempted to be foisted on Hindus.

What sort of editorial standards say that such news should be buried, while the headline “And They Hanged Yakub” is splashed on front pages the day after convicted terrorist Yakub Memon was hanged as per the law of this land, after he had exhausted all his legal options, including multiple appeals to the Supreme Court and the President of Bharat? 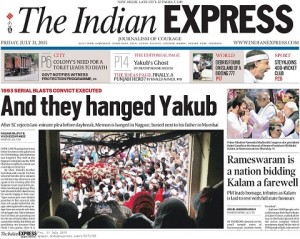