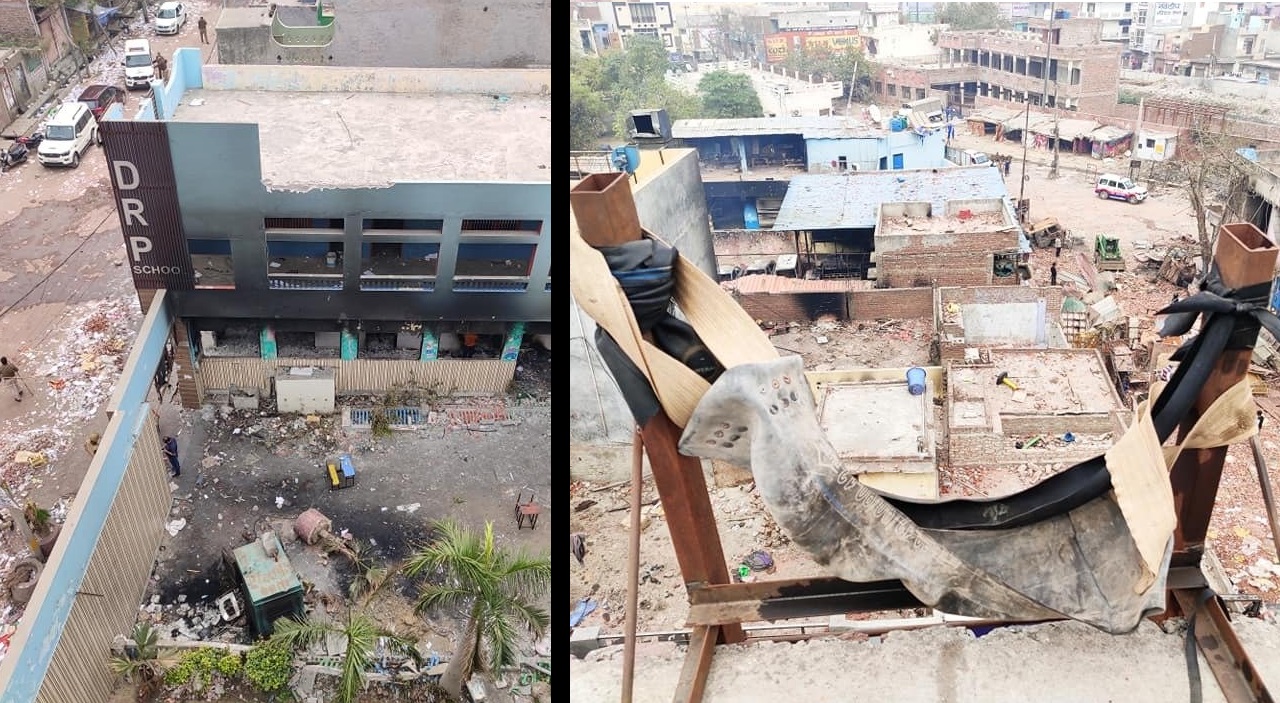 The Islamist-inspired riots that charred the capital city last month left many innocents dead on both sides. Some of the most gruesome incidents to emerge from these riots were of Hindus murdered in unimaginably brutal ways. But the pre-planned and systemic way in which Hindu localities and properties were targeted reveals the long-term planning that went into these riots. Most of this is predictably going unreported in mainstream media and its left-liberal Western counterparts.

A Hindu-owned school in Shiv Vihar was completely gutted in fire, while a Muslim-owned school right next door was reportedly used as an arsenal for carrying out the violence

Visuals of the vandalized institution are testimonial to how the classrooms and furniture including desks and benches had been set on fire. Even toilets were not spared. Rioters entered the DRP school with the help of a rope connected from Rajdhani school. Eye-witnesses estimate that the mob that attacked the Hindu-owned school was about 250 strong.

Sunil Sharma, manager of DRP School, states that petrol bombs were launched through slingshots fixed at the adjoining Rajdhani school that stands merely 11 meters away. Rioters stationed at Rajdhani school also pelted stones at DRP, and armed men shot bullets towards the school. Am unarmed innocent Hindu man, Dinesh Kumar, lost his life in this violence while several Hindus have been injured severely and are undergoing treatment. The claims of Mr. Sharma can be verified testing the absolute destruction of DRP school as compared to Rajdhani School which has been virtually left untouched. Not only were bombs thrown at DRP school from Rajdhani school, the later was converted into a fortress that provided shelter to violent rioters.

Reporters from OpIndia found several improvised slingshots mounted on welded iron frames at the rooftop of Rajdhani school. They also found piles of rocks, massive drums filled with bricks and other weapons necessary for orchestrating a riot. That this was a planned and plotted violence that took weeks, if not months, for plotting and executing, was evident from the preparedness seen at this rooftop. Even the locals who the reporter spoke with opined that the scale of petrol bombs and other projectiles hurled from roof of Rajdhani school indicated long-term planning. Every evidence screamed of the detail with which the Islamists had plotted out the entire rampage much in advance.

There was also a marriage hall next to the Rajdhani School, and even this marriage hall and vehicles parked there came under the Muslim rioter’s radar and were gutted by them. Locals complain that the mainstream media showed no interest in covering the violence orchestrated at Shiv Vihar by the Islamist radicals.

After witnessing the damage in Shiv Vihar and eyewitness Hindu accounts, a direct parallel can be drawn with  what transpired at Chand Bagh where AAP councillor Tahir Hussain’s house was used as an attack base to inflict maximum damage on Hindu-owned movable and immovable property. In Shiv Vihar, it was the Muslim-owned Rajdhani school that was turned into a militant base to inflict damage on Hindus.

This is the truth of the anti-Hindu riots of the capital city which has been watered down by all left-liberal media houses nationwide and across borders to present and propagate a concocted story of Muslim pogrom.