Will the Bar and Bench set new benchmarks? 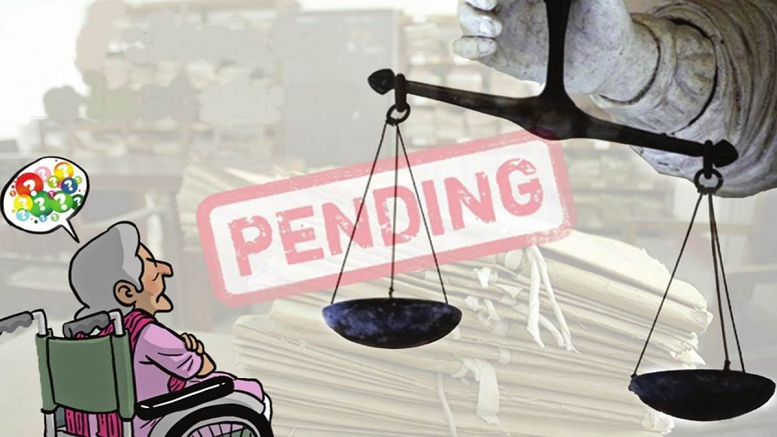 While nearly 46 lakh cases are pending before 25 High Courts across the country, 396 posts of judges, out of a sanctioned total of 1079, are vacant.

The process of computerization initiated in 1990s is going at a snail’s pace and so far only 18 high courts, 10 benches are fully computerized. The lower courts are very much lagging behind in this regard.

Bharatiya judiciary enjoys the luxury of 120-130 days court holidays in a year. The judiciary effectively functions only for 8 months annually. It is not an exaggeration to say that even the nursery-going kids do not have that many holidays in Bharat compared to the judiciary.

There is a serious need to prune down the number of court holidays and if required the judiciary must function throughout the week with the staff and the judges taking weekly holidays by rotation.

66% of the overall cases in the country comprise of land and property disputes, 10% of the cases consist of family disputes, 8% on financial dues, 3.4% on plea for injunction orders, says a study conducted by Daksh, an NGO. Therefore, when the cases pertaining to land and property disputes are reduced, there is a scope for the overall number of pending cases coming down significantly.

For this to happen, the centre and the states must evolve a strategy through collaborative approach since the governments are the parties in majority of land dispute cases pending in the courts.

There is a need to bring legislative measures to fix the total responsibility of verification of the titles of the owners of properties during sale deed registration for transfer of ownership on the government rather than the current practice of just functioning as property registration fees collection centres.

Paucity of financial resources is the main reason for tardy implementation of the total automation and shortage of infrastructure in the judiciary. The central government allocates funds in annual budgets based on the recommendations of the Finance Commission. However, in reality the funds so allocated are either inadequate or underutilized due to various reasons.

Though the judiciary is an independent body under the constitution it does not have financial independence. The 13th Finance Commission had recommended for allocation of Rs. 5,000 Crores for the period 2010-15 for developing the infrastructure, whereas the actual amount spent was less than Rs. 2,500 Crores.

The 14th Finance Commission has recommended Rs. 9,749 Crores to the department of justice for upgrading the infrastructure (for the period 2016-20) for speedy disposal of cases and reduction of pending cases. The centre and the states hardly spend 0.4% of their overall budget amounts to meet the requirements of the judiciary which is grossly inadequate.

To address this problem there has to be a legislative obligation on the government to allocate and release the funds on timely basis to the judiciary as per the recommendations of the Finance Commission.

What the Judiciary can do?

The judiciary has to fix time lines in consultation with the government to complete the total automation in all the courts, particularly at the lower courts where there are maximum number of cases pending. The recent decision of the Supreme Court to hear certain urgent cases through video conference is a welcome move. However, this should not be as a temporary move and it must continue in the long run as a matter of routine.

To start with the courts may function both under traditional mode as well as through video conference mode. Since government departments are party to around “46 percent” of court cases (according to the Ministry of Law and Justice), it is time to think of shifting all the cases where government agencies are both petitioners as well as respondents for resolution through video conference mode and the rest of the cases may be heard under traditional mode.

Along with this when the judiciary starts functioning throughout the week with the staff and the judges taking weekly holidays by rotation as suggested above one can expect a significant improvement in the disposal of the pending cases. As these steps do not require any legislative measures, the judiciary can implement the same with the support of Bar Council of India.

In the words of Justice V R Krishna Iyer, “All power is a trust – we are accountable for its exercise – it all springs, from the people for the people. Discretion becomes a duty when the beneficiary brings home the circumstances for its benign exercise.”