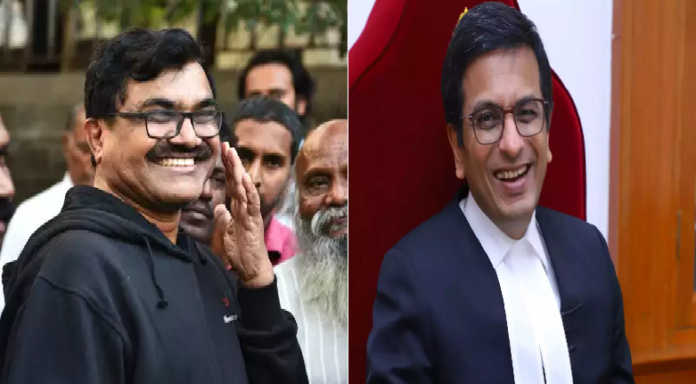 The Supreme Court on Friday dismissed a plea filed by NIA seeking cancellation of bail granted to activist Anand Teltumbde, accused in Bhima Koregaon case which is also connected to a Maoist plot to assassinate PM Modi.

A bench headed by Chief Justice D.Y. Chandrachud and comprising Justice Hima Kohli refused to ‘interfere’ with the Bombay High Court (HC), which granted bail to Teltumbde and dismissed the plea filed by NIA. However, the top court said the observation of the high court shall not be treated as conclusive final findings at the trial.

Senior advocate Kapil Sibal, representing Teltumbde, contended before the bench that the high court has already dealt with the matter and they showed to it that there is ‘no evidence’ against him.

The bench asked the NIA’s counsel, what is the role attributable to him? Additional Solicitor General Aishwarya Bhati, representing the NIA, said under UAPA, it is not necessary that the terrorist act is to be carried out and there is (evidence of) preparatory act carried out for proscribed organisation.

She further added that the court should look at the larger canvas of how the banned terror outfit CPI (Maoist) works and they can show that he is connected to the organisation – in propagation of ideology, organising, fund transfer, etc.

After hearing detailed arguments, the bench said it is dismissing the NIA’s plea.

A Mumbai HC division bench of Justice A.S. Gadkari and Justice Milind Jadhav had earlier granted the bail plea of Teltumbde, filed in 2021, challenging an order of the special NIA court rejecting his bail application in July last year.

Teltumbde, through his lawyers  Mihir Desai and Devyani Kulkarni, admitted in HC said that though he had visited Pune on the day of the Elgar Parishad, he left the place ‘before the conference started’.

However, the high court stayed the bail order for a week to allow the National Investigation Agency (NIA) appeal against it in the Supreme Court.

Teltumbde (72), a former Bharat Petroleum executive who was last working as a management professor at Goa Institute of Management, had surrendered before the National Investigation Agency in April 2020 following a Supreme Court order.

Granting him bail of Rs 100,000 plus two sureties, the division bench noted that ‘prima facie’, UAPA sections for offences of unlawful activities, terrorist acts and conspiracy were ‘not made out’, though membership and support to a terror group was made out.

NIA had produced a document showing one “Anand T” had received Rs 90,000 from co-accused ‘Surendra (Gadling)’ through ‘Milind (Teltumbde) – as this was unsigned, the HC said that therefore, “at this prima facie stage”, it cannot presume that ‘Anand T’ received the said amount as argued by NIA. The HC also noted that the probability of the document referring to ‘Anand’ as a central committee member of the banned CPI (Maoist), being related to another person as claimed by Anand Teltumbde, “cannot be ruled out, unless material is shown to the contrary”.

The NIA had accused Teltumbde of being the convenor of the Elgar Parishad of December 31, 2017, where fiery speeches were made which resulted in inter-community violence (based on a two-century old historical feud) between Mahars (SCs) and Marathas (seeking OBC status) at Bhima-Koregaon, Pune, on January 1, 2018, in which one person was killed. More violence erupted in the following days across Maharashtra resulting in death of a minor boy in Nanded, 30 policemen and several other citizens being injured, and over 300 people being detained.

The two incidents sparked a nationwide furore and later the investigations by Pune Police, followed by the NIA, expanded the scope of the probe after they uncovered a conspiracy to assassinate Prime Minister Narendra Modi and overthrow the central government.

The NIA charged Teltumbde for being an active member of the banned CPI (Maoist) and deeply involved in furtherance of its agenda. Strongly opposing the bail plea, NIA’s special public prosecutor Sandesh Patil also accused Anand Teltumbde of inspiring his brother, the late Maoist terrorist Milind Teltumbde, to participate in the movement and shared prohibited literature from international conferences with him.

Milind Teltumbde was among the 26 Maoist terrorists killed in an encounter with Maharashtra Police in Red Terror-affected Gadchiroli district on 13 November 2021. He was wanted in 63 criminal cases and carried a Rs. 50 lakh reward on his head at the time of his death.

Anand Teltumbde is also the brother-in-law of Vanchit Bahujan Aghadi (VBA) President Prakash Ambedkar, a grandson of B. R. Ambedkar, who had played a key role in the violent protests across Maharashtra following the Bhima Koregaon clashes. VBA has allied with other ‘secular’ (read rabidly anti-Hindu, Islamist) parties like RJD, AIMIM, IUML at various times and also flirted with likes of NCP and Congress.

Of the 16 accused in the Elgar Parishad/Bhima Koregaon case, Catholic priest Stan Swamy died while two others, Varavara Rao and Sudha Bharadwaj have also been granted bail. Another accused, Gautam Navlakha, was granted “house arrest” in a library owned by CPI (Marxist) by the Supreme Court.

3, including a doctor, held for supporting Maoist terrorists in Maharashtra’s Gadchiroli